I have been tracking my isk per hour for the pass couple of weeks. I would like to know if you guys are at or around the same isk per hour?

I think CCP has been playing with the loot drops again or I am having a very bad run of loot drops.

That seems a bit low for level 4 missions.

Combat sites - Per hour I am running negative isk per hour

How on earth did you manage that?

How TF do you get negative ISK per hour? Are you shooting asteroids? Getting CONCORDed?

This looks about right. Unless you bling speed fit L4s that’s about how much they net. Most of the loot is relatively worthless compared to the time it takes to drag it in and salvage it. However, depending on the area you’re in, all of these activities have nearly no risk.

In Highsec, doing abyssal filaments or invasion will net you a MUCH higher payout. However it comes with a much higher risk.

did you keep on doing dens in order to have ded5 ? those ded5 can net a bit of money. The truth is, the speed depends a LOT on the ship you use. in guristas space a thorax can be good, for refuges a destroyer would be better.

This looks about right.

You may be right. It’s been a while since I’ve done missions without a Mach or Nightmare.
I tried it once with a T2 fit T1 BS when I got bored and went back to faction because of how tedious it was in comparison.

Edit: I seem to remember making 20-30 mil an hour with a Mach doing the long level 4s and skipping the annoying short ones.
Many of the rat bounties were nearly a mil in the final rooms.

Recently i have been in hs for fun, here is what i got:

I dont really look at isk per hour as it turns the game into a job vs fun. But depending on the ship and the mission I can get 10mil+ in a tick. I usally use a Kronos. I have gotten that high of a tick and all the loot and salvage before the tick. So that would be roughly 14 mil in 20 min. Some missions less. So I’m sure I could average 25 to 30 mil in a hour. Again that’s depending on the missions and the ship I use. I estimated on the low side.

I cannot imagine getting your reported level 4 mission hourly payout.
While some missions may only earn 2-3M isk in payout/ bonus, the loot/salvage easily doubles/ triples that…and that is for quick, straight forward ones that take under 15-20 minutes each. Larger mission taking up to 40-60 minutes gross 4-6M isk pay/bonus with up to 22+M isk salvage (S Blockade) and 2-6M loot.

Course, blitzing missions can make the turn over even faster, but with reduced loot/salvage. Don’t forget the LP value earned as well!

I get at least 500 mil per day doing combat/ded sites.
so…

Recently i have been in hs for fun, here is what i got: 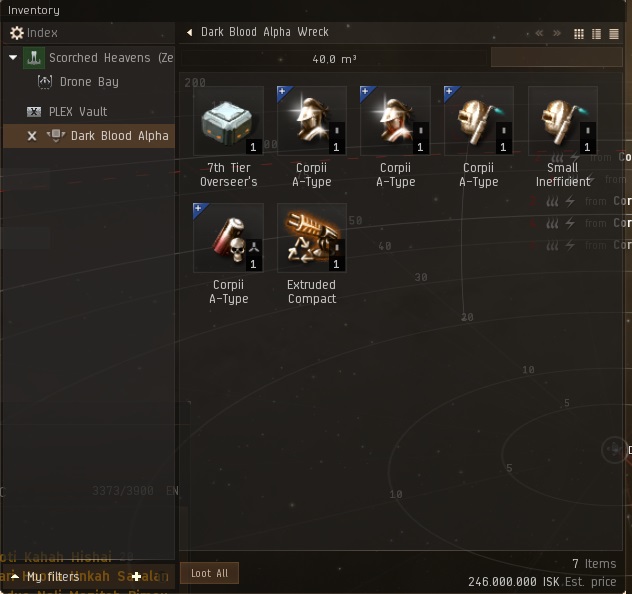 This is the loot from a 3/10, which can be done by a week old newbie in a destroyer. It’s an above average drop but still, it happens fairly often.

HS combat exploration done in the right way, with the right type of ships and the right amount of effort make isk just fine.

Your figures are possibly accurate. But maybe for playstyles that are not optimized. I would agree with previous posters that your figures for Lv4 missions are for non-optimized grinding, for example. Part of the fun in PvE is the game within the game of figuring out how to make your income more streamlined and efficient.

Lv4 missions as example again, you don’t accept every mission. You learn which ones are more profitable, whether the mission is worth more blitzing or farming. They are getting more rare, but there are still a couple missions that you can farm for at least 40-50mil isk/hr for up to 7 days before having to turn it in. But most often, it’s better to blitz. The majority of PvE in EVE is like this, they require research and strategizing and maybe even some craftiness, before they turn into a solid income that can start to fuel other adventures.

If you scan three data sites in hisec in an hour (and seriously you’d have a hard time NOT finding three) and you got two 600k isk value decryptors out of each you’re looking at double what you’ve stated, at least.

I take issue with pretty much all the figures you’ve quoted here.

It’s an above average drop but still, it happens fairly often.

The majority of PvE in EVE is like this, they require research and strategizing and maybe even some craftiness, before they turn into a solid income that can start to fuel other adventures.

You forgot to mention spreadsheets.

OP it would be helpful to know what your flying, an idea of your fit and skills. As it can vary so much from one player to another. Most of your numbers seem very low.