How do I get people to talk to me in-game?

Can I get another 2 please?

As for the AFK side of things, you would be correct, I tend to dock up or get safe if I go AFK. And everyone goes AFK at some point, but it is whether you are in space and vulnerable when doing so is important.

Just repeat whatever you said to get on the list in the first place.

I wouldn’t want to burden this thread with good advice and common sense.

Once the OP talked at me in local and I just warped past, and now I feel bad like maybe I neglected him and he feels lonely out there in the void.

Just shoot people then there is a good chance they will talk to you.

Local is an ok way to meet new friends but I don’t think its like it once was.

Another way to find people to chat with are in game chat channels like the new player and recruitment channels for example.

Most of the social interaction happens between corp mates or alliance mates.

Sadly most of the time I see someone in local they are trying to sell me something…or trick me. So I don’t respond to simple messages.

That said, I haven’t seen icebreaker-style questions in awhile. I would be more likely to respond to someone who is obviously trying to start a non-scammy or needy conversation.

“Hey, y’all! Any plans for the holidays?”

Probably work better in Corp chat than local, but it could happen.

Also, there are a LOT of social channels now that people may be talking in, and local kind of gets forgotten.

I’ve checked my local and seen several jumps past someone said hi. Maybe I should start sending them messages back or something.

There are not many people who would want to talk, because they do something that excludes chatting, their ISK/h would be a lot lower, or they would die to NPCs while not paying attention. Or they do chat on some channel already, and the local doesnt interest them.

Miners also do something else that make their hands or eyes uccupied.

Try low sec or null sec local for chats. Best if you post your ASCII nudes. People watch local there.

so I’m going to have to pretend I don’t know you for a while, sorry

You won’t get much conversation from players specially from corporation officer and CEOs, they have a pretty extensive rapsheet of harassing players in game and bordering on permabans, so they resort to communicate through discord or ventrilo. Where they can project their harassment with impunity.

Sounds like a you problem. Join a better corp.

+1 for trying in lowsec and nullsec as prettymuch everyone out there has the local chat separate from the rest, which somewhat boosts your chance of getting attention. I think Syndicate could be a good region to start.

Or maybe you can find some of these people in highsec but that’s pretty rare.

I’ll do a test: create a char, pretend to be new and be social in chat, looking for groups to join. Let’s see how easy that is in the current climate.

get a game like family feud or something like that, where its harder to guess what the number one answer is.

Made a much better improvement instead. 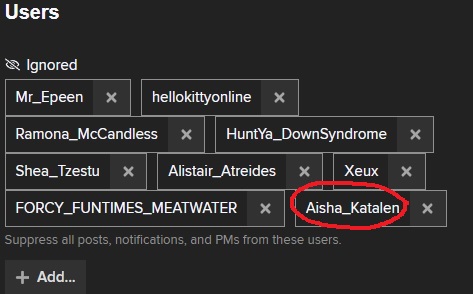 Still a you problem.