How many skill points are required

Ok, so first off… I’m not interested in the time it takes or the factors of “perfection” I’m only interested in the base line minimum amount required. I’m sure this has been asked a million times, but I can’t find the thread, so a link is always helpful.

How many SP do you need to sit in a Titan (just the SP amount). The second question would be, how man sp do you need to fit a titan - I know this is a broad question, and you could say well it’s X-amount to lvl 5 fit, but in reality if you faction fit it, most of that does not require lvl5’s (I’m well aware you wouldn’t want to field it if it was not maxed).

I’m just after and amount of SP that you would need at a base for each of the scenarios, so I can get an idea of time then required to skill a few toons for sale.

Get Evemon and figure it out

If I was able to get it while away on business, I would, but sadly I have resorted to the forums. Thank you for your meaningful contribution friend

If you want to fly titan you need corp/alliance. Ask your friends about fit. Then mentioned Evemon to get number of injectors.

But pro tip: bigger does not mean better. Afik titan outside PvP and big battles has limited to no use.
Just by fact that you write it in New Citizen section and age of your character. I really suggest learning more about game, before you invest thousands of dollars in pixels that will probable instantly explode you undock.

If I was able to get it while away on business, I would, but sadly I have resorted to the forums. Thank you for your meaningful contribution friend

FML, this is the reason ppl don’t use forums when asking questions. Ppl don’t read the post, even when you make it clear before you ask the question. It’s almost like ppl try to get it wrong, not sure how else they come up with the answers they do??

Anyway, as I stated in the original post.
Thanks

I think there is some principal or corollary that dictates answers to questions posed to eve online players that goes something like this:

The issue here, is you want to do this to train a character up to sell…and expect other people to do the calculations for you (at least that’s my issue, and why I’m a sarcastic ass)

Wait until you get home from business maybe, as getting Evemon and figuring it out yourself is going to be much more beneficial for you in the future for your character planning purposes.

I’m mean not really? Like you stated, it’s your issue, feel free to carry on posting here!? Makes no difference to me, but I appreciate the bumps

Since hounds where relesed. Just because someone don’t want to do simple homework for OP. I will give some hints. Hoepfuly he at lest can do math by himself… 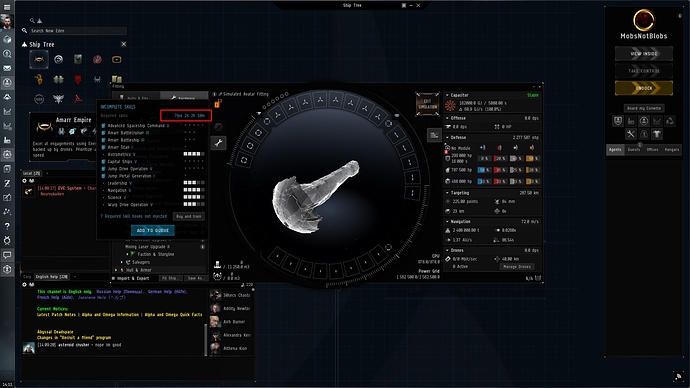 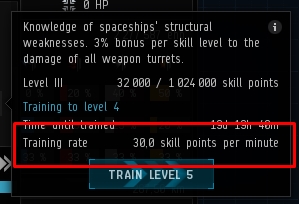 Eve university shows the total training time for an Avatar at 194d 6h 24m 16s (https://wiki.eveuniversity.org/Avatar). They don’t say what attributes they are assuming but base 1800 SP/hour (even mapping, no implants) you end up with a bit less than 8.5 million SP. That’s minimum to sit in the hull.

This is why I asked, because while I know u get the OMG why ask ppl, you also get the ppl that are happy to help. Thanks bud

Yeah, I was wondering about the same when I started.
But we all know it’s just hypothetical. My Rorqual skill plan says 50 days - it doesn’t diminish since last summer…

Hahaha I know that all to well.

I was thinking, because the actual amount of skill points is less than I thought, do you know what the associated fit skill points would be? I get the fit varies massively between shield and Armor, also being able to use different mods based on situations. But just a general idea? Was thinking I would skill for a year then sell with +4 implants.

I try to excel in Frigs, that’s much cheaper. I have no clue what weapons have to be fit on that monster: Doomsday weapons, Jump generators and so on I never cared about yet.

I’m a kinda surprised that Titan skilling (16x) just is the double lenght and amount of BS skilling (8x), while BS Skilling is four times as long as Frig skilling. But in the end it’s simple maths.

OP
of course you can be sarcastic because some posters above did not give you the answer you expected to your direct questions, but you can understand that

I took my lowest skill player (basically a PI ALT) and checked the mastery tab for the Avatar. Level III mastery is roughly 7,000,000 SP - that’s about the minimum you should consider. Level 4 mastery is roughly 14,000,000 SP. These are approximations because she already has some of the required certificates and I rounded off training time to the nearest day.