How to get more people to play eve

In regards to plex apparently people hoarding this

On the other hand, short term we drive away poors and we have the chance of giving ourselves a huge profit, I’m willing to take that risk

so if the attitude of many players is simply that customers leaving or not signing up is good if it turns them a profit the reality is there is incredibly little that can be done to get more people to play.

Every time I read a paragraph like this, I know I can go check the guys zKillboard and find out he’s a high sec PVPer.

They could try mine too, I write similar stuff and my killboard is for all intents and purposes blank; if you don’t count dying to NPCs.

The End of Goonswarm Approaches. Lets Put an end to them, and all their sub-organizations
The way we talk on the forums.. Needs fixing
Scipio_Artelius (Scipio Artelius) April 21, 2019, 11:38am #1260

For some reason I’ve avoided this thread until now. I don’t know why, but most likely because the title of the thread to me, poses the wrong question/challenge. Here’s my TL;DR:

TL;DR:
It isn’t our role to get more people to play EVE. That’s CCP’s. But as a community, we can do a lot to help keep people once they find the game.

It’s CCP’s role to bring people to the game. It’s in their best interest to do so and they have marketing professionals to help with that.

However once they are here, we can do a lot to provide a community that they want to stay part of.

That’s the difficulty I have with a number of changes in recent years that have near eliminated some aspects of the game that gave EVE the reputation it has and the niche it fills, but that provided ways to weed out the truly toxic people.

It’s allowed scumbags to thrive and to do far more damage than highsec pvpers, or lowsec gate camps, or nullbear F1 monkeys, etc.

For example, take Naari Naarian. Claims to be a 2003 player, raising an Alliance of new players in highsec, yet he does nothing but scam those new players.

In less than a week for example, he sought donations of 7.25 Billion from a group of new players, to fund further expansion of his scam alliance and for secret projects that involve funding purchases for himself: 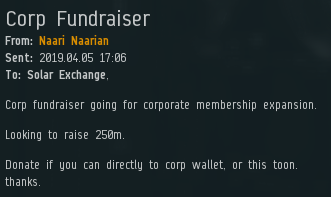 I have heard he uses excess ISK from his scams to fund PLEX so he can play as an Omega, by continuously asking for donations from his new player corp/alliance members. No evidence of that yet, but it does go with the style of his play.

A 2003 player, can’t even fund 250 million for Corp expansion and needs to scam it from new players that don’t know any better.

He charges 1 Billion ISK non-refundable for members to take on certain roles and spams them to take them on whenever he can:

Instead of fixing up his own security, he instead threatens his new players with 250 million ISK fines for mining into cans:

And now, after making enemies of everyone in the forum through his inconsistent information and lies, he has himself wardecced.

Instead of being adult about that, he’s now kicking people, even the good people in his Corp after he let in several gankers and awoxers:

After promoting new players to move their stuff into his Raitaru (which he didn’t pay for but got through other Corp members), he’s now locked them away and forced those new players into using asset safety at 15% cost to them individually.

Many of these players don’t have the ISK to cover that at this point in their time in game.

And of course, he changed the Corporate tax rate to 100% (it’s changed back again now, but he just does these things for short periods of time when he knows it will advantage him): 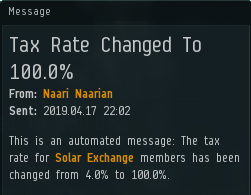 New players don’t understand what this means. They don’t see that he is directly stealing from their time in game. They just see how hard it is to get into the game because they rat and mine and do the other things that new players do, and the person they think they are following, is stealing from them constantly.

We look after new players properly (no matter what their preferred playstyle, whether it’s highsec pvpers, industry, mining, ganking, whatever). We help them and teach them how to play the game.

That alone is a good start.

I’d sell mine for 2 billion, but I’d have to find a mug dumb enough to offer 40+% over market value first.

if you don’t count dying to NPCs.

Heh, don’t let that “not counted in statistics” line fool you, we’re counting… oh yes sir we are counting.

lol have you seen my killboard?

LOL, I hafta admit up until ~30 secs ago I had not

But now I do see there were… let’s call them “the troubles” ~2013, but apart from that, not too shabby

“Killboards” are another (minor) reason not to play EVE.

They discourage “learning by losing”, which is the only practical way to learn combat in any MMO I’ve ever played.

They encourage “killing for stats”, which just makes an already negative characteristic of EVE (far too much one-sided combat) even worse.

While that is true, the player he is referencing is on another level.

You sir should get a medal…

They discourage “learning by losing”

Another cute sound bite where you fail to say HOW…

far too much one-sided combat

If you know any good members that have been kicked throw them my way, were not a perfect corp but the focus is more on having fun and improvement for pvp; i dont recall ever asking members for anything.

The main difference between us and any other newbro group is we have less rules… well we have none really… and that any training is more along the lines of scouting, tackling and small gang/solo pvp.

Would be a shame if they were to quit altogether.

This is Abuse, and ccp has made eve pay to win. Players should be outraged and know about these issues
Omnathious_Deninard (Omnathious Deninard) April 21, 2019, 1:46pm #1272

Would be a shame if they were to quit altogether.

It’s unfortunate the damage he has caused will effect over 100 (probably new) players.

and he is also trying to run for csm?

Yes, he had a campaign thread, it got locked though.

There’s being a dick, which is fine in Eve, and then there’s being enough of a dick that even the other dicks think that you’re a dick for taking the dickery too far.

As the trope states: even evil has standards.

the player he is referencing is on another level.

No, he is not. He takes what he is allowed to take. Exactly what the game is suppesod to allow.