I just enjoy kicking you out of Metropolis

They are pretty easy to deal with, they have strong EHP/DPS stats thanks to having destroyer PG but lack any kind of control with 2 mids. 5 WCS punishers can only capture large plexes which require 20 minute timers and you can still kill them with 3 scram slashers or whatever.

5 WCS punishers can only capture large plexes which require 20 minute timers and you can still kill them with 3 scram slashers or whatever.

Bring 6 then you can capture the larger than large plexes. 3 scram slashers are going to take on 5 punishers except no they probably aren’t even if there was a universe where people fly 3 scram slashers.

I flew them to kill minmatar 4 WCS rifters about a year ago, used to be a lot of them around Dal at the time.

And a rifter is similar to a punisher in what way ?

You need 3 scrams to stop one with all WCS in the lows.

TBH I don’t see that many WCS punishers after the buff there used to be a lot back when they had 4 lows and when they announced they were giving them 5 I thought the end of the universe had come but it didn’t for some reason.

Maybe the stabbed farmer thought ‘What’s this, CCP is making it easier for us there has to be a catch nobody use punishers.’

Now that they are restricted from plexes with gates you see even less, that problem is just about solved, I just referenced it as a point that the punisher has always been a source of irritation.

My alt is Omega but thank you for your concern.

I’m not concerned, it’s you who is wasting 500 plex a month on a character that only ever flies a ■■■■ brick T1 frig.

It only costs him 100m if he is skill extracting on that account to keep it subbed, also he may be using the other character slots for other tasks. I have a bunch of thrasher/tristan/ventures in FW in my alt character slots of my accounts.

Well anyway my point is punishers are awful and I don’t like them. 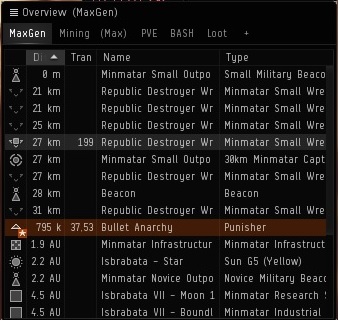 We don’t talk about Bullet on the forum

Plus if you’re literally bumblin’ around our staging during our prime TZ, whaddya expect?

How am I meant to know when Siamese TZ is ?

So you’re wasting 500 plex a month on characters that only ever fly thrashers with cap batteries fitted?

I am fairly sure the last 10 thrashers my corp lost didn’t have a cap battery though I cant guarantee that they won’t ever have one.