Not sure what the deal here is, but the entire region (malpais) had zero spawns for days, and previously had well over a week without spawns, but meanwhile there is this type of thing going on… 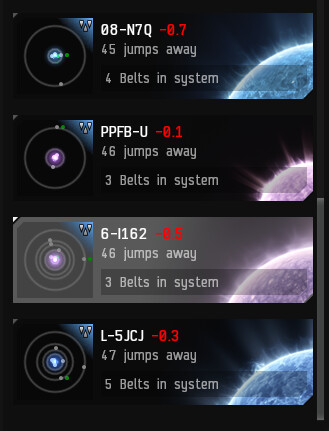 I was under the impression that the belts only stacked up to 3 in a given system? This is not the only instance of this, and i have yet to see hisec regions go long periods of time without spawns.

I understand ICE will migrate now after the anom is mined out, and it has a chance to spawn basicly anywhere ICE “can” spawn. However, perhaps we can get the belts to de-spawn after X amount of days? it would still allow things to stack, and for people to want to move around to mine, but honestly it is kinda crazy that because people on the other side of the universe aren’t mining ice, the entire region i live in gets screwed over.

Does anyone know if systems have a % modifier as to the chance of ice spawning? this really really hurts us small corps in null that were renting systems with ICE spawns as a form of income and industry.

When you find an answer I’d like to know too, not sure if industrial upgrades will help but yeah CCP really jacked a lot of things up.

I don’t believe that CCP ‘jacked a lot’ up. I think CCP is doing the right thing with the changes, both to industry and ore spawning, and a lot of people aren’t happy with it, I get it. But we have to have some faith in our space overlords.

It’s not easy to build a ship now with the ore changes, because we have to source ore from multiple locations, which isn’t easy for the little guy to do, but it adds some dynamic, and it also makes me completely give up on Industry and run to the PVP route!

I think it’s best to wait and see before we judge too much… If the last year of scarcity help CCP fix what they need to fix, it’s a small price to pay. But if the changes drop and everything is bonkers, that won’t be good.

Long ago before CCP was sold off the thing they did was increase the minerals to build things, battlecruisers were about 10 to 15 mil to build, then it went to 25 mil suddenly and since then it doubled, now look at where we are at today, you can expect everything to double or triple in price in about 5 years or less if the player base stays stable otherwise as things continue to get more expensive it will turn people off and away from eve or turn to RMT to pay for outrageous prices just to play a game that some already pay subscriptions for.

For vets it doesn’t make too much of a difference, most of us are pretty well off enough, new people, yeah there is not too many viable options that they can really get to rise up for years and years and most people will walk and the game will stale up again.

The market is very fluid right now, yes, but mostly because of the upcoming changes, people are predicting what everything is going to work out to be and so things get expensive as a result.

Once the changes actually hit, it will take some more time for the market to adjust… The market probably won’t be stable for at least a month after the patch. But I’m a terrible speculator!

It’s hard for new players to make the amount of money to PLEX their accounts, but even vets would burn through a nest egg plexing their accounts with the current changes. Not so much anymore because PLEX has dropped almost 250~ million in price in the last few months.

I honestly believe we have to wait for the changes, things are so fluid right now.

things are so fluid right now.

Agree, hopefully since building smaller ships may still be viable for newer players it won’t be too bad for them, the only vets burning thru their reserves will be those playing the big man, as far as your solo players I think most will reach a point where they will stay, at that point they will either get bored or just rinse and repeat in endless grinding.