Your character is IMMORTAL. You cannot die. Your starter ship can be replaced for free at any time. What more could you possibly need?

When I read the requirements for a new idea or suggestion, nothing was mentioned about giving statistics or numbers. It was just an idea, I apologize if I hit an insecure nerve…but I am entertained watching you attempt to troll me, good stuff.

Semantics… Obviously you cannot die on a video game… Don’t be a douche.

When I read the requirements for a new idea or suggestion, nothing was mentioned about giving statistics or numbers.

But you never show proof that they actually are getting attacked in the first place. I.e. you never show a real problem that can be solved with your idea.

Don’t be a douche.

What is wrong with you?

“There are a great many ideas that could be tried, but yours still sucks. And if you don’t care one way or the other why do you keep posting to defend it?”

If my idea sucks, then why keep trolling the thread? Obviously you are more concerned about current players using the idea for their advantage than new players becoming acclimated to the game. Totally cool, I get it, dumb…but yea.

I offered a suggestion… That’s it. My crime was what? That I defended it against the veteran trolls that are more worried about current players using it as a loophole than they are about retaining new players. Cool, I get it…

I offered a suggestion… That’s it. My crime was what? That I defended it

Your crime was offering a suggestion, and when challenged on it, trying to weasel around and refusing to actually address the problems that were brought up with it. You didn’t defend it. You came up with weak excuses, most of which weren’t even relevant to the original post, suggesting it was a shitty idea that was poorly thought out.

If my idea sucks, then why keep telling me?

Because you keep posting to defend it. As long as people keep posting and defending stupid ideas I will inform them (and anyone reading the thread) that the idea is stupid.

Obviously you are more concerned about current players using the idea for their advantage than new players becoming acclimated to the game.

Yes, I am more concerned about a major exploit that will be abused in game-breaking ways than about a mostly-irrelevant bonus for newbies that arguably does more harm than good.

Shitty idea? Maybe! Worthy of veteran trolls to come out and bash a new player trying to help? FFS, the toxicity of this community is 2nd to none… Enjoy,

Worthy of veteran players to come out and bash a troll who refuses to listen to criticism and whines when they don’t get the praise they were hoping to hear?

You called me a douche because I pointed out that newbies have absolutely nothing to fear - even if they are blown up and podded, it is no big deal. You are the troll here, sir.

I called you a douche because you pointed out the obvious, you can’t die in a video game…lol

Wow… Will I ever recover from that one? It hurts…lol

You weren’t trying to help. Since we get kids like you every other week, let me guess you backstory.

You’re new, and don’t know how to play the game. So you log in, and being the new player you are, decide to do something “safe” like hauling or mining, only to make new player mistakes and get killed when doing something dumb.

Instead of telling yourself, “wow, this is a harsher game that I expected, I should go find resources on how to get better”, you decided, “NO! This did not meet MY expectations, I’m going to suggest that CCP change the game so that it suits ME and MY OWN view of what EVE Online is supposed to be!”

You weren’t trying to help. You were being selfish. 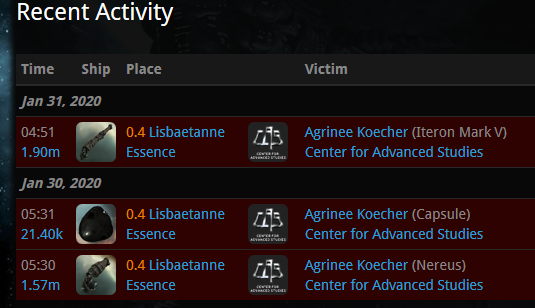 Well would you look at that.

The reason it doesn’t hurt is because you are just here to troll.

I called you a douche because you pointed out the obvious, you can’t die in a video game…lol

If it’s so obvious then why do you post things suggesting that you don’t understand this simple concept?

Well would you look at that.

I am totally shocked and did not see this coming at all.

I lost what? Like 2-3m isk worth of ships and cargo? That’s nothing…and I don’t even care about those losses, I took a lot more during PvE…for me, it’s fun. That is why I like this game. You trying to insult me, pretending you know what my motives are…it’s just sad, I mean really… Easy enough to troll a n00b off the forums just for having a suggestion, but going to zkills to try and shame them, hilarious…can’t even make it up.

I lost what? Like 2-3m isk worth of ships and cargo?

Classic attempt to divert the conversation.

I don’t care how much you lost. I don’t care what isk value it was worth.
I’m calling you out on your “I just want to help” bs, because it’s obvious that you don’t actually want to help anyone. Your idea is nothing more than just a selfish tantrum because you were killed by someone.

And instead of trying to get better, you’re coming to CCP and trying to make a suggestion (under the false guise of “New Player Retention”) to make new players unkillable. You’re not trying to help anyone but yourself.

If you actually “want to help”, you’re gonna need to back up your claims.
Do you know how many players would actually stick around if they were invulnerable?
Have you collected any number of players who were going to quit because they were attacked unwillingly?
Why do you keep changing your justification, first it was “new player retention” then it was “level up their skills” and then you jumped over to “explore”. Are you claiming that your one change will help ALL of those?

I’m asking for you to provide a single piece of evidence to back up anything you’ve said. Mostly because:

So going by that, we can expect your suggestion, of making new players invulnerable for 14 days, would actually be WORSE in regards to your original thread’s title claim that this is to help “New Player Retention”.