I’m concerned because nothing I heard today lived up to what CCP Paragon hinted at when he told us the price increase would make sense once fanfest arrived because we’d think “it was worth” the additional cost.

I’m just so disappointed right now and can’t help but wonder why can’t CCP focus just on EvE instead of pouring EvE money into these spinoffs projects? 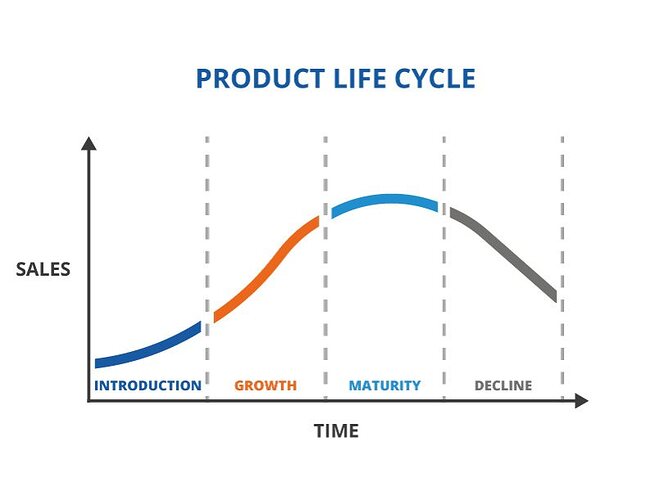 EVE has been in the decline phase for a long, long time. It’s actually impressive really, but the reality is that EVE will never be what it once was and CCP/PA know this. All companies do with their products and it would be foolish to throw good money after bad when it’s much more practical to extend the life of a current product for as long as it’s profitable while diversifying and hopefully creating a new “hit” product. Rinse and repeat.

Enjoy EVE what it lasts…

There should be focus on new PVE content first.

Then what? 5 years later it becomes just the same as all the other things here?

4x is so boring
after alpha centauri it was all downhill

Do we get the option to pay less if we are not interested in shooters or 4x games?

What happened to Eve Valkyrie? Was the money earned by Eve spent to it?

You pay for the quality of Eve but the money goes to other projects? Its like i pay taxes to goverment but the goverment spend the money to refugees. I get nothing back.

Funny how the CSM was created in the decline phase… 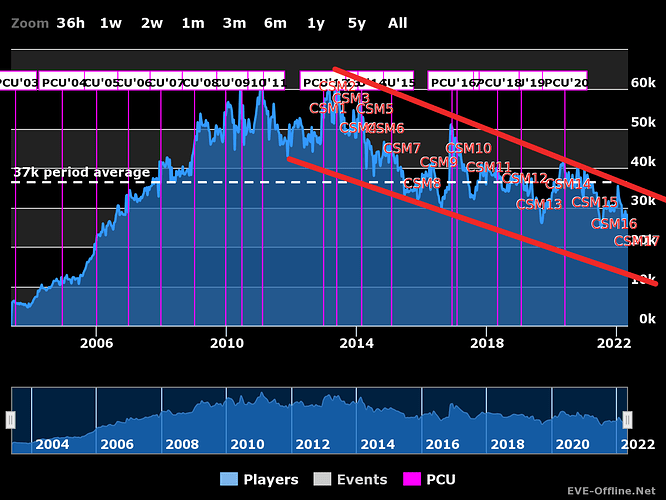 CSM is like the checklist you reach for in the flight manual during the pre-crash phase to keep you calm.

Isn’t the whole world somehow declining at the moment? So what do you expect?

Isn’t the whole world somehow declining at the moment?

Peak Eve was 2013. It’s been in decline for a decade (see previous chart).

Larger economic decline is incoming, you haven’t seen decline yet.

Funny how the CSM was created in the decline phase

Funny how that isn’t even true at all: the first CSM was in elected in May 2008.

Funny how it’s been in decline since, Peak Eve was 2013, since then downtrend of decline phase. CSM has not changed trajectory of that phase simply because it is not likely to be possible at all. It is in a deathglide.

Funny how it’s been in decline since, Peak Eve was 2013

You on more crack than normal?

There is no chance it can get out of decline, switch off is likely within 5…7 years at this rate.

Milk it until it’s dry.

The only reason to keep it switched on is for a “record” claim of “longest running MMO” (Anarchy Online has that currently?) as PR for CCPGames and pimp their success for other products.

There is no chance it can get out of decline, switch off is likely within 5…7 years at this rate.

Sure, but as usual, that has nothing to do with when the CSM started and when the game started going into decline.

The CSM isn’t to blame for decline in the game. That responsibility sits straight on CCP’s shoulders, not players.

The CSM isn’t to blame for decline in the game

I see no reason to keep the CSM as it’s not changing the trajectory. All it is doing is milking you to keep gliding longer. Herd the milking cows to the suction cups.

I see no reason to keep the CSM

Who cares what you see or don’t see. The CSM is a CCP construct and as long as they want it, it’ll stay. All the crying in the World you can do won’t change that, but at least get your facts right when qq’ing.

Don‘t worry, the moment CCP shuts down EVE I will buy the company to keep the lights on. Elon can by Twitter so why can’t we buy CCP if we want to?

History repeats. We’ve been here before.

CSM was created because CCP knew they were going to peak and after was decline.

Many games do and EVE is clearly on the decline.

CCP are in the unenviable position where, naturally because of where they started, they still look to put local staff into senior positions. Unfortunately, Iceland has less than 400000 people, which is a pool of talent that will never (no matter where it was in the World) produce multiple World-class devs.

On top of that, World-class devs aren’t going to go live in Iceland. There are far better places to aim for.

As a result, CCP will always be a B-grade company trying to produce a AAA game and recent years have begun to show the limits of what B-graders can think up and produce.