I noticed less activity in Amarr-Space. Is that part of space now dead and should I head to another place? Or is it maybe just the summertime?

What part of Amarr space? It’s huge and different groups patrol different parts of it.

If you are anywhere along the old Jita-Amarr route, you are going to see less traffic. Niarja was made inaccessible, and completely disrupted that trade route. Any of the other pilots more aligned to one of the other Empires, likely have moved as well (especially Caldari). There are still plenty of Amarrian high sec dwellers, but I would not be surprised if they have spread out over more regions, rather than focusing in Domain.

If you think Amarr space is bad check out Gallente or Minmatar space, in either case it’s a desolate wasteland in contrast.

Nobody plays this game anymore.

I know. All corps are dying right now.

It’s the Summertime, death is not taking place in Eve.

New Eden is a garden island at the moment, take this time to make it yours, before they return.

It’s the Summertime, death is not taking place in Eve. 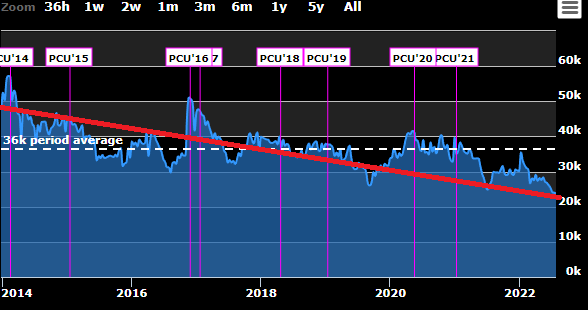 Come back in 3 months to see what the rebound after the yearly summer dip is. You should be comparing the low point to low points. Which yes show a decrease, but not as much of one as that random red line is trying to show. This game still has plenty of paying customers to keep the lights on.

Which yes show a decrease

Not worth moving, Amarr is ok, it’s just that there’s less alts online.

That was a good time. The amount of ■■■■ annihilated with the collapse of that trade route is impressing!