Is Pyfa Bugged Or Am I?

I made a Harbinger build, but for some reason the ships resistances aren’t showing - both the base/default ship resistances and the added bonuses from the currently equipped and active thermal and kinetic armor hardener modules: 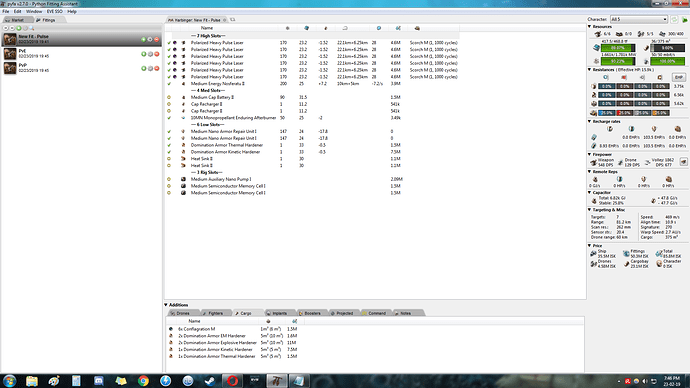 Is there a good reason this is happening? I can’t seem to find anything online about it, about it being a problem or a simply misunderstood option of being able to switch your own ships resistances on and off and how and there doesn’t seem to be a dedicated Pyfa forum to check and/or ask.

Edit: Not sure how to enlarge the image but clicking on it does somewhat.

Polarized weapons will do that. They make your resists 0.
Read the attributes for the weapon.

while you are at it, try to answer these questions to yourself:

why are you using medium cap battery on a battlecruiser instead of large one?
why SMC rigs instead of CCC?
how do you plan to get those nano armor repair units when they are not available in the game anymore aside from, possibly, some collectors? There is a reason Pyfa shows 0 for the price.

That nosferatu gives a false sense of cap stability in the pyfa and wont work as well as you think during real flight.

Large batteries, just like anything else large for the Harbinger - is too big taking too much power/fitting. It fits medium sized equipment, from the weapons to the nos to the batteries to the armor repairers.

The nos was actually thrown on as extra, having a spare slot and just enough fitting so it’s more of a bonus than a vital strategic build decision. Probably not even needed for the PvE the fit is currently named for.

Good to know there is outdated equipment on Pyfa and that it’s the stuff that has 0 for the price, though. I figured maybe the region the prices were based off, didn’t stock some of the equipment or something.

Thanks for the feedback.

Large batteries, just like anything else large for the Harbinger - is too big taking too much power/fitting. It fits medium sized equipment, from the weapons to the nos to the batteries to the armor repairers.

Large cap battery gives so much cap/regen that players fit them even to cruisers… in a sense it is a broken/OP module.

I suggest ignoring her fitting and figuring it out for yourself. There are so many people sharing the same fittings, that the amount of people flying the same ■■■■ is only ever increasing.

They claim it’s because it’s the “best”, but in actuality it’s just a combination of lack of individual brilliance and flat out boring. Homogenous ■■■■■■■■.

Always tinker for yourself, until you get it right. It’s a game, after all.

Good luck with your setup!

I suggest ignoring her fitting and figuring it out for yourself. There are so many people sharing the same fittings, that the amount of people flying the same ■■■■ is only ever increasing.

there is a reason they are shared - they work.

They claim it’s because it’s the “best”, but in actuality it’s just a combination of lack of individual brilliance and flat out boring. Homogenous ■■■■■■■■.

no one claimed they are “best”, they are simple and cheap - right tool for the job, imo.

Always tinker for yourself, until you get it right. It’s a game, after all.

and win darwin fit award at some point. Yes, they are fun but dysfunctional.

I was not saying to copy the fit, i posted it so the OP can learn something from it and create his own but viable.

Ah interesting, crazy to think you can make a build around one module taking like a 3rd of power.

And projekt, no offense but after seeing your general aspergers-like presence on the forums and the rumors about having a previous account banned, it sounds like you just want people running suboptimal builds to be able to get easy kills.

Ignoring good advice and a good build just because “so many other people do it” just doesn’t make sense.

It doesn’t really matter to me what others are or aren’t flying - especially for a PvE fit.

In the end it’s the piloting and every bit of feedback helps - i’m not just going to blindly copy/paste - it helps me learn the game, gives a base to build off, understand why and how things are chosen etc.

I wonder if that build would work with Beam, since Beam seems superior for PvE due to similar damage at double the range with just some tracking penalty. Since Beam builds are apparently a bigger capac/power hog.

EDIT: I put a Beam fit on that to compare to mine (just replaced with beam weps, since i got rid of Pulse for PvE) and while yours is cap stable, mine lasts 30min - yours is 5% over power and 76 more DPS, while mine fits and has almost double EHP/s (due to both the second armor repairer as well as a nanite ancillary and an armor command burst II) : 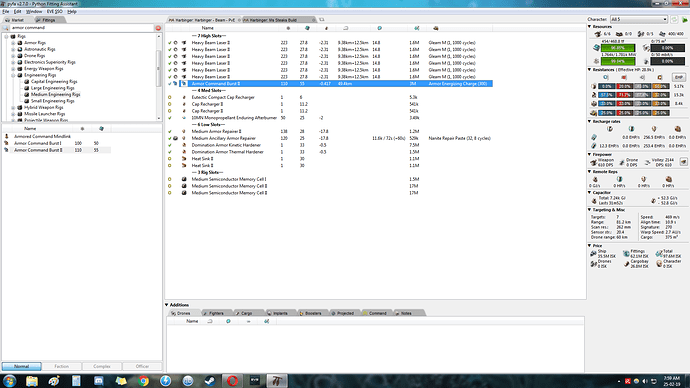 (Also if you switch the incoming damage to Kin/Therm for the example PvE rat fight that’s been fit for, my EHP/s would go higher for having 15% higher therm/kin res total.)

The theory crafting is awesome in this i must say haha.