Deleted whole game before I found this threat but your solution works. Thanks.

I can’t find AppData folder for eve, am i missing something? 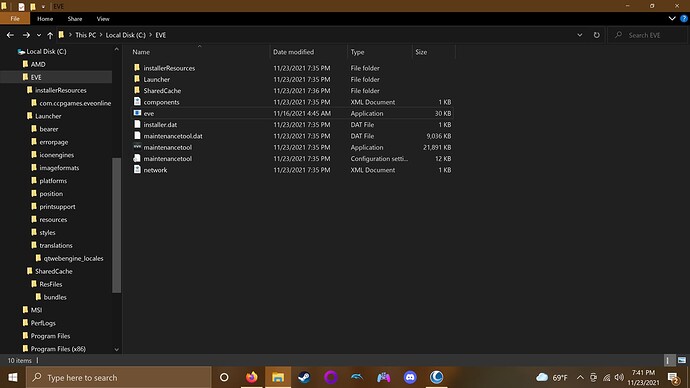 The AppData folder has a hidden/system attribute, which means by default it is hidden in Explorer. It can be seen if you adjust the options to show all hidden files. (but this will show other system files and is not recommended) It is also in a different location from where you are looking in the photo.

I hope it helps

What a nice colour theme of Windows that is. Very suitable.

Super appreciate the help & i found the correct folders & tried deleting catch, but same result. Tried Naikum’s idea of deleting everything in %LOCALAPPDATA%\CCP\EVE\ & that also had same result, eve icon just flashes on taskbar for split second before it disappears. Tried downloading second instance of EVE that isn’t on steam, same result. Same with reinstalling either as well.

There was an issue reported a while back where Avast antivirus caused problems for the Eve launcher. I don’t know which antivirus software you use, so I don’t know if the info applies in this case, but I’m mentioning it to give you one more avenue to investigate to try and solve your problem.

You could look into adding the launcher to the Antivirus software’s list of exclusions / trusted software. If it is feasible maybe.

Good luck in your bug hunting and hope you find a solution!

Thanks for the suggestion! Unfortunately tried & same result.

I have been emailing eve support for a week or two & i just keep hitting a brick wall, no progress whatsoever. i was able to play eve through browser, but looks like they literally just discontinued that for unknown reasons & removed my only method of playing this game. bummer, idk if i can ever play again on this comp & no one knows why. Any other methods as a last resort?

for 3 months I’ve been trying to fix this. YOU ARE A GOD!!! thank you for posting this. I hope you are doing well in life. Peace be with you brother.

Worked for me too.
Note that you have to allow Windows Explorer to “Show Hidden Files/Folders” to see the AppData folder in the directory. Thanks!

Bump for solution that worked in 2022. Thanks!

The solution didn’t worked for me. Ofc it didn’t what did I thought? That something would actually work for me on first try even once? NAAHHH! Anyways when I start the launcher I get the CCP logo light up for like 4 seconds then a white window appears and I get an orange pulsating icon in my taskbar for about 0.1 seconds and then it just closes itself. And when I finally found the cache I deleted the whole folder and I tried restarting it, it showed me again the CCP logo then the white window and it disappeared again while filling the cache folder with new stuff. Idk what happened.

So all the above did not work for me… and this is how i fixed it:

Thanks so much for posting this, took me a while to realize this just happened to me. Go figure!

Guess they aren’t about to fix it longer term…

The launcher just closes without any error message whether it is a standalone or a steam version.

I had this issue suddenly pop up today.

This worked for me.