Oh well, at least this is the first time in years I can say the Oscars was entertaining to watch. 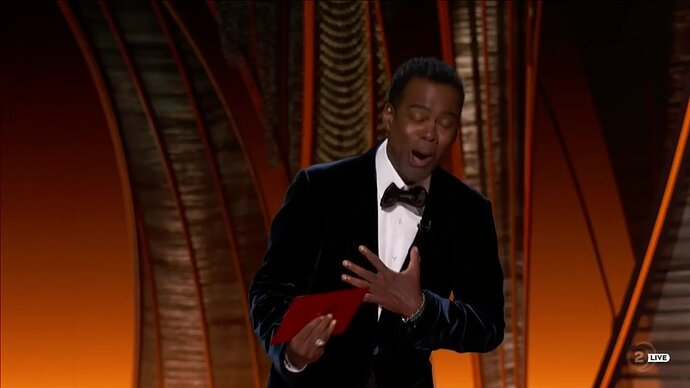 @moreoffilms
The Full Uncensored video of Will Smith’s altercation with Chris Rock at the #Oscars https://t.co/cGQ3plSEiz
1 Like
Remi_Lacroix (Remi Lacroix) March 29, 2022, 5:34pm #2

wasn’t that the slap game or somesuch?

That was staged (they’re actors remember and on a stage), entirely set up to get viewers (false flag) as the Oscar’s viewers is in decline… To think, some people believe the WWF/WWE is real too. 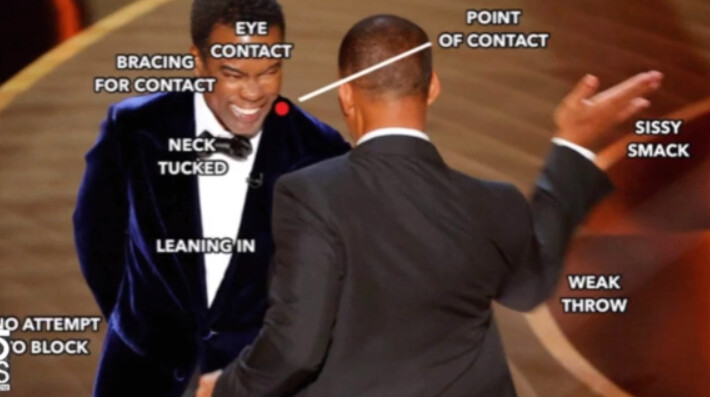 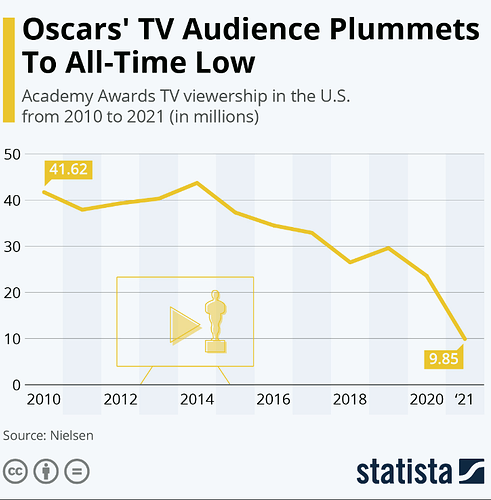 Best speech ever at the Oscars 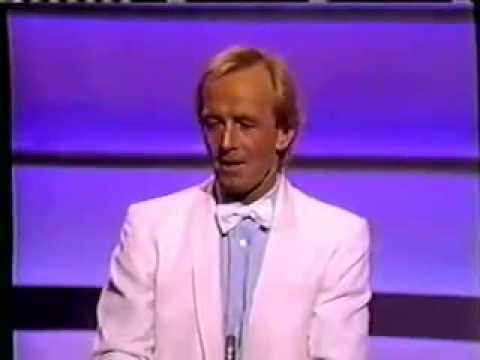 You are not alone in thinking that this was staged. If turns out to be true, it’s not the first time stars have done this either. Janet Jackson and Justin Timberlake did that too during the halftime Super Bowl show.

Not sure why the outrage, it’s not like it’s something new to see, we’ve seen them planted in our faces since birth.

At least he didn’t get onto the stage to shout “DogeCoin to the moon!”. Yet.

I don’t know if it was staged or not ( certainly doesn’t look like it to me ) but it felt very satisfying to see Chris Rock get biotchslapped. I can’t stand that guy at all.
Not only that but I think Will Smith shouldn’t have needed a nod from his wife to get up and slap that bum. It was a long time coming and I’m glad Chris Rock got put in his place.
Now I like Will Smith even more.

I think Smith blew a pretty good opportunity in addition to getting himself banned from the Academy for 10 years.

He could have walked up to the stage and roasted Rock with one-liners. Everyone knows Smith is a pretty sharp speaker with the gift of the gab and taking Rock down a few notches in front of a worldwide audience would have accomplished the same thing. Now Rock is riding on a new wave of popularity and all it cost him was a slap to the face and one G.I. Jane joke.

He got excused from having to attend the cringiest evening of the whole year and having to pretend he likes it, made with an award and let Chris know just how he felt. His action that evening show how much he cares for the hoopla that surround the Oscars. That slap didn’t origin just from that joke and although in restrospect anyone of us would have done the right thing because hindsight is always 20/20, he may have felt the G I Jane reference to be the last straw. Chris bears a part of responsibility as well knowing he had already crossed several lines with Will in the past. It was the wrong night and wrong place to add to an animosity dating back years, wrong joke on the wrong person as well.
At least that’s the way I feel about all that. I’m not saying I would’ve done the same but that’s how I understand it.

Yeah, I agree with you that the G.I. Jane joke was not the reason Smith smacked Rock. Rock has said far worse about Jada Smith during his comedy touring and like you said, that joke was the last straw that broke the camel’s back.

The timing (and the place) of that act occurring wasn’t the best. As one member of the Academy board of governors said (anonymously), the night was ruined. It also made the Academy Awards show less worth the time spent watching, something not helpful at a time where its ratings are falling faster than Kevin Sorbo’s appearance fee at a sci-fi convention.

Not only that but I think Will Smith shouldn’t have needed a nod from his wife to get up and slap that bum. It was a long time coming and I’m glad Chris Rock got put in his place.
Now I like Will Smith even more.

Agreed, I think Will Smith is cool, I like his comedy and sci-fi films a lot, I don’t agree that he got a nod from his wife. I think he noticed the look of severe anxiety behind her pretend laugh and decided to act. Since the camera never caught the moment where Will switched and decided to slap I guess we will never know.

I’m going to go with the most realistic scenario of a man trying to protect his wife from nasty jokes about an illness which affects her hair growth.

I think he noticed the look of severe anxiety behind her pretend to laugh and decided to act.

Yes. I first thought that she gave him a glance but she actually looked up then back at Chris. I guess that’s when he saw she wasn’t amused.