So today I decided to fit a Covetor and go mine some asteroids near my main production system. Hour or so semi-afk activity, I used to enjoy it for couple hours per week.

The problem is - where the hell are all the asteroids? I scouted some 7 systems in Lonetrek, and only found some random small scordite rocks in one belt. Not even one in Akiainavas (newbie starter system).

I assume that’s because of new NPC mining fleet. How is super casual player supposed to do one of core activites in EVE? Even in their website, they boast that miners mine “155 million m3 of ore”, while starting player won’t find single asteroid within miles.

Mining value in Lonetrek was 1.1 trillion in June economic report. Second only to The Forge for empire space. If you want to find rocks in highsec move farther from Jita.

There are lots of empty systems out in the boonies where you can mine all day if you want to.

How is super casual player supposed to do one of core activites in EVE?

by looking for them and putting some effort into it. when belts are empty, it means someone stripped them down and thus you need to do what everyone else does: search for them.

you being a casual player, or not, is irrelevant. nothing entitles you to anything, in this game you have to put the same effort into things like everyone else. highsec is big, go find a better spot.

Actually the OP is correct. There were threads posted in the recently retired old forums about NPC Mining Fleets stripping Asteroid Belts bare in various systems throughout New Eden.

The sad part about that is CCP has recently implemented Mining Bots into the game when in the past they had enacted and promoted a ‘War On Bots’ which seemed to be fairly successful.

Maybe they did that to give CODE some more targets since hardly anyone does mining anymore.

How populated this system is? In high-sec I can strip few belts per day from most profitable ores just with t2 retriver. So if have lot of miners in system its normal that there is no rocks even without NPC miners.

To make good profit from high-sec mining you need to find dead system or with many big belts (8-10 belts or even more).

I saw thirteen ventures and barges with haulers, all NPC’s, in a Career Agent system. About eight hours after DT all asteroids were eaten.

Why they just don’t give NPC mining bots to everyone?

The NPC miners were put in as a prototype - if you don’t mind their response fleet and losing standing, you are more than welcome to shoot them.

I have mined a number of Hi-sec belts, even with the NPCs there, I mine rocks faster so it doesn’t matter to me so much.
Does it suck for causal players? Yes. But we have to adapt.

And what you want to mine? Velspard? Go few jumps from most populated system and you have rocks for 24/h mining even with barge or exumer.

Why NPC mining in rookie system? To make them go deeper in world. Not just stay in one-two systems. Why you even want to mine there?

Based on my brief experience, I would say move on to a different constellation. I have a trio of 0.5 systems within a half-dozen jumps of a trade hub, in all of them there’s more Rich Plagioclase than I can cart off in an hour or two. Maybe those NPC fleets are not as common in lesser hi-sec?

I’m a casual player, and a relative newb.

You have to look to find a system, or systems that don’t get cleaned out by noon. They’re out there. Get a series of systems to visit, until you find one. I have 6 that I lurk about it in. Usually at least one or two of them are good for just about any ore that occurs there.

You know, even a casual player can mine gas/ore in wormholes. Minimal skills are required. Sure, you lose a ship from time to time. Don’t take it personally, and don’t mine with a Covetor in a WH. My 5million ISK Ventures usually pay for themselves two or three times with one good haul of gas or rare ore. Losing one just means I buy another one. (I buy them three at a time now).

Try to see how many trips you can get before you get caught. Don’t fret about what you can’t do, enjoy the things you CAN do in this game.
It’s a game, have fun.

Here are some steps to take.

It’s fine you want to be close to the main market hub however alot of people are. Realistically, you will have to search up to 10 jumps away. Trips back to main market hub are not that bad.

This is the tricky part, some kind Eve players have set up free ports which anyone can use. Or you can just ask to join the Corp that owns the structure.

You can do either or, however have to find a structure close to the main market hub to process ore to make Logistics easier of course.

Just had to write that down as a reminder for later.

Ok,
Best thing to do is circling cirles. This means, start out from your Home or FOB. Fly to the belts to check their status, then make an action plan and mine the bleepedy blank bleep out of them.

I like drawings so I added a screenshot from dotlan ( http://evemaps.dotlan.net/system/Akiainavas ) where you can see the links better than in the ingame map which loosk like some crazy cobweb no one understands. 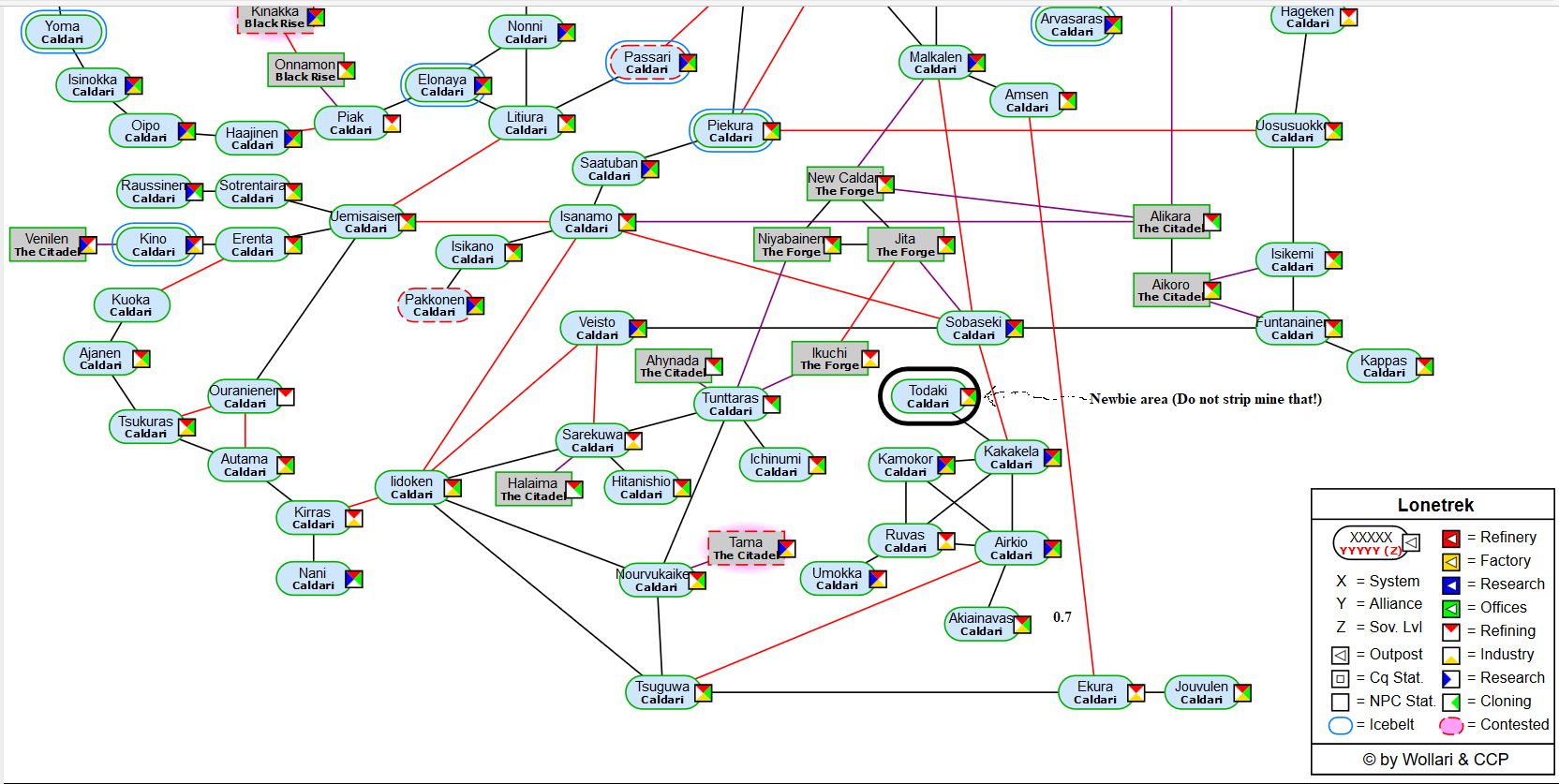 You start out at Akianiavas belt 1 to ? then check Airkio then Ruvas then Umokka. You should be able to find some good veldspar in that basic region. Now if you need other types, circle larger areas. I used to mine in Todaki with an Ibis, so I’m sure there are always some areas nearby that have available belts. If you like more “expensive” ore or are intrested for the minerals inside you circle larger areas and you’ll find some. Try around lidoken or so.

Also, most people won’t tell you where they found a rare lone area as you and everyone else will rush over there and make the goldrush look like a joke.

PS: I totally forgot to tell you to do a D-SCAN and a Probe Scan once in a while. The D-scan won’t help you now but it’s a good habit for the future while the probe scan will show the anomalies discovered by others… which on occasion are… BELTS WITH RARE ORE! dramatic music

PS: I totally forgot to tell you to do a D-SCAN and a Probe Scan once in a while. The D-scan won’t help you now but it’s a good habit for the future while the probe scan will show the anomalies discovered by others… which on occasion are… BELTS WITH RARE ORE! dramatic music

Great to see constructive dialog focused around the subject. I’m relatively new, too, and I share the observation that a few trips pay for the vessel and to take it too seriously is an error in judgement. I don’t have to go into low sec to find rocks I can sell for millions of isk to make this fun and worthwhile.

You can make 5 mil/h mining velspard in venture. Or 5mil/15 min in ninja gas. Profit depends on what risk you take.

Often times its best to go to outskirts of empire space to find more rocks/ice High sec pockets are another great place, as the RP group called Code. That is against miners don’t tend to operate in those.

Just becareful getting in and out. and mine in a Procurer or Skiff as they are far tankier, and less prone to being suicide ganked.

Erkinen is one of these pockets. Ice/ore belts. and very little traffic, little competition.

When you mention them in public, they won’t be anymore, though…

Also consider joining a null sec corp and mining with them. There’s at least one i know of that offers all kinds of null sec ore, zero refining tax and cheap jita courier service to sell your goods

This works if you can find a fit for yourself. Timezone and RL commitments are major hurdles for casuals in my experience. I tried several alliances when I first signed up, but after a few weeks it was clear that I wasn’t going to match with any of them. With industry locked behind the sub fee, one wants to be sure they are getting their money’s worth, and mining highsec alone in a Venture is satisfying for about thirty minutes.