Good afternoon good people. I need insight from you all as to why Mobile Depots are supported by CCP for the following use case:

I tried contacting CCP and they do not care to take action (except to tell me to post here), so I am posting here.

So your question is: “why doesn’t CCP make extra work for themselves?”

I find most people cant be arsed to replace them when I kill them, so try finishing the job?

It looks like my original post was not successful in communicating the situation. The person who puts up the 40 Mobile Depot artwork abomination replaces them religiously when they get reinforced, just at off hours. They’ll spend 30 mins or whatever picking them up and replacing them. So finishing the job, which I’d love to do, has not been practicable with the current game mechanics.

The other is why people spend crazy time erecting this mobile depot ‘art pieces’ to begin with (and time maintaining them).

They have to repair the shields or else re-deploying does nothing but remove the active reinforcement timer. If they re-deploy and the shields are still at 25% you can shoot them again but this time they won’t be reinforced.

If the art installation is in high sec, you can damage them all, scout the installation, figure out who is maintaining them, and either:

If you don’t like those options, complain to CCP about their removal of a bunch of ways to shoot people in High Sec.

Well, to be fair, it is a sandbox. People do lots and lots of irrational and crazy stuff in it.

I have never seen CCP fix obvious, easy stuff. My impression is that only things that are defined by management as key initiatives ever get done. There are lots of things in this game that could be fixed in a day, but there is probably no way for anybody to initiate the change on the CCP developer side.

My suggestion: put down your own depots, mixed with theirs, to mess up their design.

And if your security status is bad then you can’t even fly around because the faction police ruins everything.

It’s crazy we have to wait 2 days for the timer. 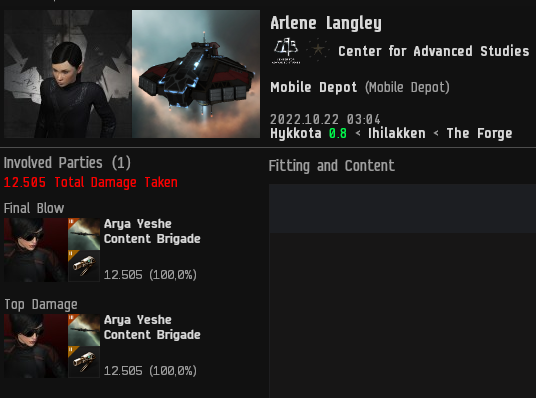 My suggestion: put down your own depots, mixed with theirs, to mess up their design.

LOL, this is a good move

You know as well as they do when reinforcement ends, so why cant you be there first?

The other is why people spend crazy time erecting this mobile depot ‘art pieces’ to begin with (and time maintaining them).

Yes…but your reaction might well make it worth it to them, ya know? Ignore it or as was mentioned mess up their pattern with your own depots.

I did that twice. 0 impact, the person doing this in Perimeter is fanatic.

I do think it’s a bit crazy they can be so tough.

I hate timers so no longer shooting depots. Too much effort for minimal gain.

I think the possible solution could be to apply scarcity to them and increase their cost. Their intented usage is to refit while in space or store loot you pick up later. Not to advertise external websites, corporations (I don’t mind that one if not overused), or “space arts”.

By making the depots much more expensive you put a meaning to their kills and losses. Whoever is putting them for advertisement/art will think twice and we get much more peoples who will shoot them. Peoples who use them for their intended usage will not care about cost as they buy just one not hundred.

I don’t think that removing a possibility to scoop them is a good idea or solves anything in highsec particularly.

lol you could just turn them off your overview - but please continue, this is entertaining.

I just don’t like seeing them in space. This other person does (to the point they willingly commit 30 minutes every day/other day to replace them all after they’re all reinforced). I was there on one day they didn’t show up and killed every last one of them. Two days later, they were back again.

Since CCP thinks the current mechanic is good, please help me understand why (especially if you are one of these mobile depot artists).

There was somebody who made a career out of destroying those things. I thought it was @Solonius_Rex but I could be misremembering.

I have over 1k of them destroyed, but nope it wasn’t worth to make a career out of it. The best offer from corp to not shooting them was 20mil a month and that was single corp of them all - was destroying them in noob areas (which some claimed to be evil doing, but lo and behold CCP disallowed to put them there technically a few years later).

So doubt that… neither MTU hunting is ISK worthwhile, I have 2k+ of them killed and it didn’t made me rich at all lol.