Mobile Structure spam in Jita needs to be addressed

Admittedly it might contribute to client lag, but I don’t consider this a reason to address mobile depot spam.

The goal of a program is to be used. Client lag means you can’t use the program, often literally.

Your argument is literally absurd. It’s like you claimed that something that does prevent a car from being driven is not “a reason to address it”. Well nice to know you don’t mind buying a car full price when it has no wheels.

are we going to cap the celestial entities on grid there, too, just to ease up on client lag?

CCP literally removed items from some PVE sites because they were generating client lag. Especially those with gas inside, I remember submitting a ticket and then seeing it in a patch note like 6 months later.

Are we going to limit how many drones can be deployed on grid at once to limit client lag?

And why do you think drones are now limited to 5 ? Facepalm on this one.

and thus the S.O.S. (Save Our Spam) movement was born

to the effect that 2 thousand people have on server performance.

They have none. People in local are not an issue. Items and effects on grid, as well as people on grid, however, are.

It’s routine and uninteresting now, but Jita was an exciting and scary place when I was brand new.

And now it’s laggy and full of spam. When I land on jita IV-4, I have a 10s delay to load the grid. and most of what I have to load, is mobile depots.
BTW 50-100 is a huge understatement.

and thus the S.O.S. (Save Our Spam) movement was born

@Anderson_Geten I was referring to specific kinds of celestial entities: those which are simultaneously cosmetic (strictly non-functional in any and all contexts) and not generated by players. And when I said “are we going to limit how many drones…?” - I meant further limit, since the existing limits are sensible (and CCP was wise to make the reduction from way back when, not just from a server load perspective but from a gameplay perspective as well).

is the lag caused by mobile depots? I honestly don’t know. But I would think that 50-100 mobile depots sitting in space is probably peanuts to the effect that 2 thousand people have on server performance.

If a case against spam were to be made in relation to performance (there could in fact be a case here), then CCP first needs to provide data or conduct its own analysis on the extent to which MD spam contributes to server and client lag independently of each other. Considering these are static entities, as a software developer, I would hypothesize that the impact would be negligible for both clients and the server. Neither camp, however, has any data or report from CCP on this matter, so we have no basis on which to discuss the matter. If were to evaluate this objectively, we need to ask CCP to investigate this for us (or ask CSM to ask CCP, whatever).

If it does contribute to client (but not server) lag, there is a simpler solution to addressing spam than prohibiting their deployment: introduce an option allowing you to disable their rendering the same way you can disable drone models from rendering in the Effects section of the Display & Graphics settings: 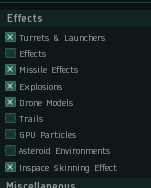 In conjunction with disabling space brackets (if you choose to do so), they would not be visible at all whatsoever. (Though if space brackets themselves are visible, these without question have virtually no impact since there is literally no 3D component to them in terms of rendering.)

Neither camp, however, has any data or report from CCP on this matter, so we have no basis on which to discuss the matter. If were to evaluate this objectively, we need to ask CCP to investigate this for us (or ask CSM to ask CCP, whatever).

We don’t have data about MD but we have data about anchored bubbles. And THOSE, even though static objects, can make the server and the client lag.
To the point that CCP said it was bug abusing.

We don’t have data about MD but we have data about anchored bubbles. And THOSE, even though static objects, can make the server and the client lag.
To the point that CCP said it was bug abusing.

I’m not saying I don’t believe you, but do you have a source for this claim?

look up bug exploit notifications. I mean there’s no way I look up all the complains about spamming things in space.

CCP has literally reimbursed people because they died to PVP in an area with too many bubbles, so they could not load the grid and died for the sole reason of the bubbles.

Remember than n entities on the grid must be propagated to everybody whenever they enter the grid, INCLUDING the states of the balls of the entities. Then the client needs to look up what needs to be looked up, eg for mobile depot : who dropped it ? This is important because it answers the questions : can I shoot it ? is it in my fleet ? what’s my standing towards it ? Basically a depot needs the same delay as a ship when being loaded.
So yes, it creates less client lag than ships, AFTER the grid is loaded, but it creates as much lag on grid entry as a ship(actually, same order).

@Anderson_Geten I’m not seeing it. It is plausible it is not listed, so a source is required for your claim.

If you think that mobile depots spam have no effect on client, you are delusional.

If you think that mobile depots spam have no effect on client, you are delusional.

I said it probably does

I also asked for data/analysis from CCP in order argue in favor of removing MD spam on grounds of server and/or client lag. That’s helping your camp, not mine.

But I would think that 50-100 mobile depots sitting in space is probably peanuts to the effect that 2 thousand people have on server performance.

That’s not quite how server performance works. If 2000 people are using up 96% of Jita’s capacity then Jita will run just fine. Add structure spam to put it up to 101% of capacity and you start getting problems, even if the structure spam is a smaller amount of load than the rest of it. It’s that last bit that pushes things over the edge and starts the rapid decline through decreasing quality until the server finally crashes. And while there is no realistic solution to the player count part of the load there is a very easy solution to the structure spam.

deployables don’t add load unless they have a direct effect (MTU tracting unit, bubble preventing warp) or are shot at/being deployed.
Remember that the server does not recompute anything that has not been changed.

Easy answer to that is deployable mines, you no longer see these in game other than in someone’s hangar collection.

These items were great when EVE was first released, but sadly removed from gameplay when systems were flooded with them to the point they were causing players loading grid to be dropped from EVE.

Luckily Jita hasn’t got to that level of loading, but with on average 2000 players and large number of player deployed structures it does cause delayed grid loading on station undock or exiting jumpgate.

There are many cases of players undocking and stuck in loading screen long enough to find their ship destroyed when grid loads on their system.

So yes large numbers of non-static items (npc stations, etc.) do cause issues.

Deployable mines were not static entities, however. They interacted with players in far, far more computationally and graphic-rendering intensive ways than MDs, and, if I recall correctly they could be deployed far more densely than MDs can now. I believe comparing the server/client load of MDs to mines might be too extreme - at least without data/analysis from CCP to back it up.

Not sure about the list, but years ago the residents of Aunenen (low-sec system fronting the hi-sec island) used to put drones, corpses, or containers all over the grid on the Nonni gate. This massive wad of spam was intended to de-cloak anyone trying to jump away. I managed to survive my jumps (most of the time!) and I immediately submitted a ticket for “intentionally causing lag”. Within minutes, a GM was in the system using the hand of God to mop up all the gate debris.

Needless to say the residents were sternly warned and that was that. @Anderson_Geten is right about GMs right-sizing bubble spam, as well. I have seen it with my own eyes. That is why it really shocks me that hundreds of MDs, mostly from just a couple players, are being allowed in Jita.

Yes, there are this kind of thing that has no “source” as you need to have been here, and at most it was “mentioned” in bug exploit notification with a vague thing that people not aware of it can’t understand.

So when people claim that static items have no impact… well.

Last patch addressed an issue with “black screen on first undock” and I have to say even if MD are the same, there is no more lag - only when warping to jita IV 4.

IMO the issue has been solved-

I was going to type “■■■■ you for necro” (teasingly), but you make a relevant point worth documenting for when this thread does end up being archived. I truly wonder what the underlying issue was if it wasn’t MD load on client or server on undock specifically

. (Warping to isn’t anywhere near as big of a deal, not usually worth mentioning any more than “this battle has too many drones” would be.)

Warping to isn’t anywhere near as big of a deal

It depends if the “docking request” is made by the server or the client once you activate AP after warp to insta dock.
If it is activated by server, then no more issue. But if activated by client, it means that with 6+ AU/s ship you may become a target the moment you land.