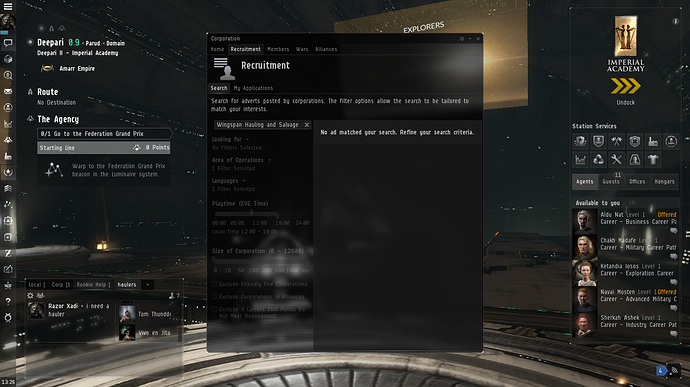 There is either a hauler’s channel in game - basically a place to ask for help moving stuff for payment. Or you can contract Red Frog to do it. https://red-frog.org/
In both cases it’ll cost you to do the move.

As a new player you are likely to find the cost a bit high (several million ISK - they are using expensive ships and have costs of their own). Your alternative is to only relocate what you want to take and sell/leave the rest. Or move it piecemeal - tedious if you are going far, or buy a hauler of your own. I’d be wary of hauling your own at this point. That’s rapidly likely to become a piñata with all your earnings in it.

You can always remove/destroy any rigs in a ship, remove the modules (strip it) and repacked it to make it physically smaller and easier to stow in a hauler.
Something like a Bestower, but try and keep the cargo value reasonably modest.

If you are going to get someone to haul for you then you’ll have to learn about courier contracts. Also, it’s not an instant service - someone has to find the time to haul your stuff for you; it could be a few days to complete.

How many ships and so forth have you accumulated? Curious really as to what a new pilot has been buying.

Thanks for answer, Are there any form to get my own Ship to transport? (Orca for example)

Yes, you could get your own ship - and an Orca is a reasonable and common approach to the travelling suitcase problem.

Look at the training needs for it first - and you can’t fly it as an Alpha clone if that applies to you. It’s going to take a fortnight to train just to fly it. And flying it without good Sheila and fitting skills is going to make a nice Billion ISK target for someone.

The simpler, cheaper, choices are things like a Bestower - but it depends on how much stuff you have.

Ok, thanks, how can i contact with red frog?

One more question, in calculator i can’t select Imperial Academy to Amarr Navy, What should i select? Amarr to Amarr?

The name of the system each station is in.
So for example if it is a Station in Hilaban and you are going to a Station in Hedion, then you would use the system names as the start and end. When you create the courier contact in game you will use the specific stations so it goes to the right place.

Imperial Academy and Amarr Navy are NPC Corporations. If you’re moving your base of operations, you should be moving to a different system. If you’re moving from one station in a particular system to another station in the same (or even an adjacent) system, just move it all manually. Or don’t move it at all.

If you’re using Red Frog’s (or another hauler corp’s) calculator, you need to put in the origin and destination systems.

When you write the contract for the hauler, you can put in the origin and destination stations.

How can i know if are NPC Corporations or not?

OK. Look in the Top Left corner. It will say where you are.
That is normally in the form of Region/Constellation/System and optionally Station of feature you are near.

Region and System are commonly used. All system names are unique.

Amarr is the name of a System - the system where the Empire of the same name started many centuries ago. As such the corporation may be named “Amarr Navy” but that’s not the same as being in the Amarr system.

How can i know if are NPC Corporations or not?

Oh now i think i understand, thanks you all

As a perfectly serious alternative in future to lugging everything with you, find a reasonably big hub to base out of where the agents and facilities you want are local, then only take the ships out that you need.

I run out of Amarr that way - I do a lot of industrial work so being at the main market is useful, and most mission agents I want are within a few jumps. Park your mission ship and run back and forth in something small and fast as you need.

So saying, I’ve junk and rubbish halfway across Domain waiting from me to do a collection run back to Amarr for sale or re-processing.

@Terak_Romaller I moved all myself yesterday, it taked me 5 hours, but next time i’ll use a hauler, thanks.

Ouch.
I find hauling tedious.
Though strangely I like Mining.

Glad the move went smoothly though - and, yeah, pay someone else to be bored.

I was seeing anime while the ships move so np haha

Don’t use autopilot. It’s an indication to gankers that you aren’t paying attention.
And keep half an eye on what is going on.
Situational awareness is your friend.

Most of the people you see here complaining about banking got caught not being careful.
Hi-sec means “Concord will punish miscreants” not “Concord will save you”.