Nvidia claimed that those cards will be specialized in_ray tracing_, a technology that focus generating light ray in a 3D environment, causing a improved realism. Of course, the examples showed by Nvidia on their Twitch account were filmed in 4K. Here is the link to the cards’ page and the performance chart : 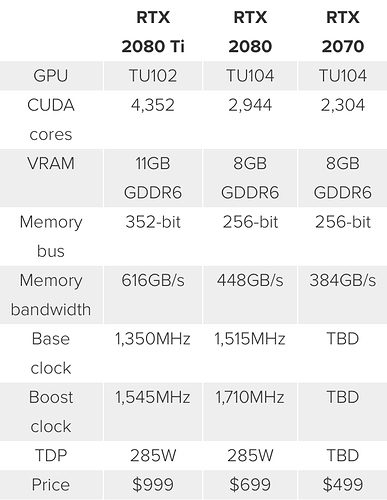 So, now the part that will make everybody remember we’re on the forums of a MMORPG and not some random Hardware topic :

First, I do know that an upgrade on the current lighting in the game cannot be considered as a “major graphic update” (even if I would love better citadel interiors), and that EVE improve it’s graphics “gradually”, but with all the upcoming hardwares and 2019 bringing it’s part of new performances never reached before, can we expect anything new from them concerning our game ?

can we expect anything new from them concerning our game ?

Not really considering that CCP still has to get rid of DX9 first. And for whom would this be? 0.0001% of the users?

Nope and probably not, there is nothing wrong with the current graphics really and any increase means dropping support for older hardware, so thats not likely to happen for a long while

One of Eve’s charms has always been that it will run on just about anything north of a fancy abacus.

I wouldn’t be expecting anything soon

For those of you who lives under a rock (that’s where you have the best WiFi !)

Wait… you play over WiFi?!?

I mean, I wouldnt suggest it. But EvE over wifi wouldnt be that bad since latency isnt a factor unless youre ping is >999ms

I just got an email from Nvidia today begging me to pre-order.

I never did understand that concept, but it seems every tom, dick, and game company these days is pushing to get you to give them lots of money on spec. Why would you pay for something you might wait a month to a year for?

In any case, I’ll wait for the reviews since my computer budget is tapped out for a while after that monitor buy.

As for EVE ever in the future needing anything more than onboard graphics…it ain’t ever no way gonna happen.

I sure as hell hope not. Otherwise I might need to upgrade from playing on two toasters wired to a microwave and plugged into an arbitrary number of potatoes

Well, to play on an Ethernet connection I would need to take the cable trough two walls so… WiFi’s still good tho, 14Mo/s when everyone is at home is far enough for me ^^

2nd:
no we will not get a graficupdate to use such cards … you really think everyone will buy such a card? there are guys with family and kids out there … they run on older hardware and this has to be possible
yea i know we can get the graficsettings down but why would CCP put a lot of real money into something 12 guys can use? maybe 15 … it makes no sense to me … in a year the same grafic power costs you 50% and in 2 years every 500$ notebook has the same grafic power … then it makes sense but not today

Ah, did my English failed me again ?

I do know that not everyone can buy a card that cost as much as an assembled computer, but here I wasn’t using the new Nvidia graphic cards aa example to say the game should at least have a quality allowing to fully use a something so powerful, I was using it as an argument to what is going to come next : more and more components will make their appearance in 2019, each time more powerful and capable.

As such, I was asking graphisms in our beloved MMORPG could evolve to something superior that we currently have, but still being able to run on a, let’s say, GTX 980 in top quality. And of course it shouldn’t be forced down every player’s throat, that’s why we have premade quality. A player running on a potato like @Cypherous would still be able to use the Low settings.

For example, the popular game World of Tanks had a complete graphic update that was quite stunning in March 2018, and even if the major modifications were only available at Maximum quality, the others settings still benefited from it, and the FPS or game comfort didn’t even suffered from it). Yes, that update changed the graphic engine, but it’s still showing us that improving what our eyes are going to see can be done without the lower computers paying the price.

For example, the popular game World of Tanks had a complete graphic update that was quite stunning in March 2018

Trinity was the only major graphics update and probably the last. The way this game is losing players, I’m not sure alienating even more of their base by using time and money better spent on game play fixes would be the way to go.

Look at steam stats. Very few of us have the rigs to push quality graphics at decent resolution and frame rate. And that’s polled from actual gamers. The common man wants to flip open his $200 notebook and be able to play EVE. Why push them away when CCP needs to do everything they can to hang on to them?

So…no. No graphics update in the future.

You have to understand that those devices aren’t designed for gaming platforms. They are designed for Graphical or Working stations to make and render cinema movies, cartoons, TV promotions or to develop big video games (current hardware should be as powerful as gaming stations will be in 3-4 years). Those RTX tools will not improve streaming quality in any ways.

If you wish to spend some bucks into computer’s hardware, then invest into SSD crystal disks - increase their size to 500GB, connect them into RAID modes. The current mechanical HDD is the main bottleneck in modern PCs (multicore i5-i7, DDR4, x64 power tech), nothing can ruing your PC performance as much as an old and filled with broken files HDD.

So, now the part that will make everybody remember we’re on the forums of a MMORPG and not some random Hardware topic

As @Dyver_Phycad mentioned above, EVE is still running on DirectX v9.1 (as main tech). EVE have to climb up to DirectX 12 firstly, to begin using those ‘ray tracing’ at max quality. We have to pay attention that in modern video card specs the Pixel and Vortex Shaders aren’t mentioned as important parameters. They are enough to render any 3D textured polygon scenes at 4kHD resolution. Now they mentioning the CUDA cores, which is a new technology to render not textured polygons, but primitive objects, hundred of thousands or millions of simple objects to form mega objects like LEGO. EVE can climb to the CUDA and ray_tracing in the next order:

The CUDA supporting must be implemented like other visual abilities in Display&Graphics tab - by a checkbox if the client’s video card supports CUDA. It will improve greatly the BLOB battle’s performance by displaying any Drones, Fighters, Missiles, shots like CUDA modelled and rendered objects. Server will run at 10TiDi, but clients can run at stable 100fps. I think this will be the start line, when EVE players will begin to buy those tools in masses.

You have to understand that those devices aren’t designed for gaming platforms.

Yes they are.
The Volta and the Quadro lines are designed for workflow.

The 10 and now 20 series are the ones marketed as high-end gaming cards.
These ones are prohibitively expensive right now because Nvidia over produced the 10 series hoping to make Bank on the crypto bubble and got left with mountains of them when it bust.
They’re still looking to shift those and with no competition they get to dickabout with the pricing.

then maybe can a grafics update be done but question is what for? is it really needed?
i know EVE on 4K highest grafic setting … looks really good

Cool newfangled stuff aside, just wait for the standardized benchmarks. None of the performance metrics being bandied about are actually useful right now.

Lads I’ve a talking horse!
Ok but how good at being a horse is it?
No no lads listen, it speaks like three languages!
Ok great but how far will it pull my cart?
Listen, it’s speaks more eloquently than any other horse!

You see my point .

Same here been playing over wifi for years running multiple accounts of Eve while watching youtube, netflix
never been a problem.

Yes they are.
The Volta and the Quadro lines are designed for workflow.

Do you know the nVidia’s marketing strategy during the last 15 years? They made many good devices no doubt, but many traditional or underrated video cards where overhyped by their marketing and promotional department (which saved the company many times) by describing an empty word or acronym like a revolutionary brand new technology.

Quadro is a well stated technology for Workstations. For me, this RTX acronym is an attempt to sell a mixed Quadro and GTX device, a hybrid testing technology, as a brand new product. Who is ready to pay addition $500 for improved x-rays or whatever ray tracing is? RTX is an attempt to put on a stable GTX core these new CUDA cores and Quadro tech, for which those new GPU series were created - TU10x. It’s very possible that many players will become disappointed with RTX… Well, I don’t like that in this new GPU architecture so many CUDA cores are using a 256-bit memory bus - it should have been 512-bit buss to step into multithreading CUDA environment if to take into consideration VRAMs.

I’ll suggest you to keep the current GTX 1080 series, especially connect in SLI mode, because they are really good and balanced at many parameters - like all nVidia’s Ti series were. GTX 1080, as a zenith of GTX series, will keep the top video performance for the next 4-5 years.

But why, only a minority of players are going to be using those cards and they don’t really provide any actual benefits, spending time and money adding raytracing support to a really old DX9 graphics engine for next to no payoff doesn’t seem like something CCP would bother with, what benefits are you actually expecting from this card? because its not going to make a mindblowing difference to most use cases

A player running on a potato like Cypherous would still be able to use the Low settings.

So you assume that because i don’t want to see them wasting time adding support for something that improves nothing that i have a potato?

cute, no i have no issues running the game at all but that doesn’t mean i’m going to fanboy over the latest trending buzzword without actually understanding how little this technology would even benefit EVE, none of the lighting used ingame actually needs raytracing to work and porting it wouldn’t actually make it look any better, maybe you should look in to what the actual use cases for these cards even is