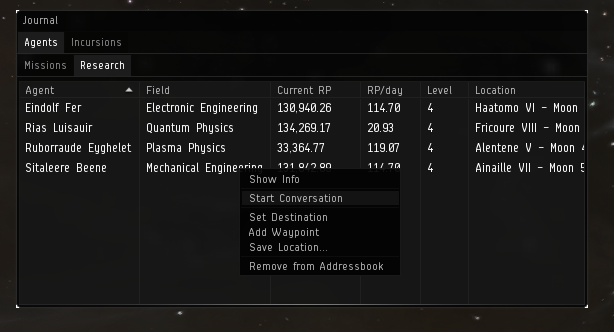 Clicking “Start Conversation” as an Alpha Blep now results in the following: 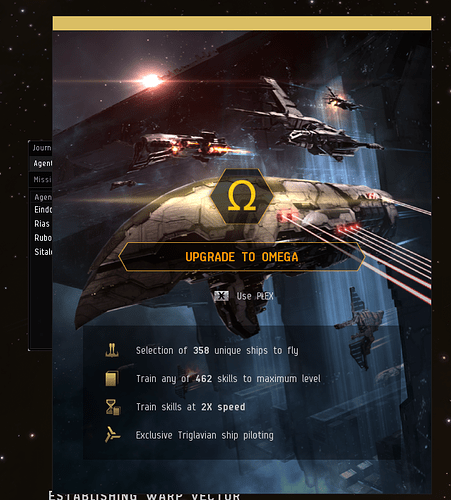 I think my main question here is: Why?

Why? Are you so desperate to get money that you have to litter this ads everywhere? I mean seriously It’s not like it is possible to find that menu and click that button without missing the fact that there is an omega option available.

I’m not even sure what would happen if I was Omega as I’m too disgusted right now to pay money to figure out the guy probably just tells me to meet in person in his dumb station 42 jumps away.

so desperate to get money

Did you get the barrage of emails from them begging you to buy Omega?

Funny that. Same with the sale.

Its like they are looking for something, something they lost down the couch…

Omega does not cost real dollar it costs 500plex p.c.m. Plex are worthless and have no real world value so CCP is not asking you to spend a penny.

Some agents need omega status to engage with, lvl+. Get Omega status or stop trying to talk to them.

To get the 500 plex, play smart it is not hard. Easily achievable with in game isk on a new account within sub 24hrs of play time.

Easily achievable with in game isk on a new account within sub 24hrs of play time.

Or an hour or so of real life work.

We get it, you don’t value your time; now kindly change the record or STFU.

Not sure if it’s the case here, but I believe those agents require Omega only skills to interact with. So if your Omega skills aren’t active then there’s no conversation.

From a game immersion perspective, I would have put in a dialogue stating something like “Sorry but I only work with licensed professionals. Omega clone or go home!”. Something either linked to lore or at least amusing.

Given the state of design/coding/polish at CCP though, I guess we should just be happy it doesn’t crash the game when you do that.

lvl4 missions/agents require omega. You get same popup if you gonna try do any omega related stuff on alpha character.

On side note. It’s pretty sad your only conclusion is: This must be money grab! I must rant about it.

Omega does not cost real dollar it costs 500plex p.c.m. Plex are worthless and have no real world value so CCP is not asking you to spend a penny.

You might want to look into where those PLEX in game come from.

They are sold by players, who bought them with RL money.

So yeah, even using PLEX generates income for CCP, it is just not your money that is used to upgrade to Omega

On side note. It’s pretty sad your only conclusion is: This must be money grab! I must rant about it.

I did not say it’s a money grab. I said it’s desperate and disgusting. But you are right, maybe it’s just pathetic.

Well, that’s what you get for being a (*slight dismissive sneer)…alpha…

Remove Alpha accounts from the game all together. Problem Solved

Well, that’s what you get for being a (*slight dismissive sneer)…alpha…

I was Omega for twelve years, just currently on a break. Just logged in to check something when I stumbled over this ads everywhere. I even have 3k PLEX left in my magical teleport hangar, but this did not put me into the mood of using them anytime soon.

It isn’t an advertisement. It’s a notification that your Alpha clone cannot access the desired service, as the service is restricted to Omega clones, and the notification provides the opportunity to upgrade to unlock that service as well as all other Omega features.

I said it’s desperate and disgusting. But you are right, maybe it’s just pathetic.

I get that perhaps you thought it was some sort of advertising barrage, but I suspect you tried to access each agent whom happen to be Omega-only, and now having been apprised that it was just giving you the opportunity to upgrade to access said agents you still want to push an agenda that somehow you clicking on the agents to access them is CCP being;

so desperate to get money that you have to litter this ads everywhere?

Discretion being the better part of valour, you could always acknowledge that you misunderstood the intent and that it was your interaction(s) in-game to Omega-only content the prompted the so-called “ads”. So far you just sound far too entitled. And it’s this sort of attitude that brings on the Alpha-hate in the community.

I think my main question here is: Why?

The agent you are trying to talk to is for Omega only.

So the game ‘warns’ you about this by suggesting to go Omega to continue.

You’re being unfair. This is a lvl4 agent,
and Alphas are locked out of lvl4s.

Imagine someone playing missions and liking it. He wants to play more missions and keeps playing. He goes through lvl1s to lvl3s, then hits the lvl4 agent and gets greeted by this. The human automatons get triggered into buying Omega.

It wouldn’t be there if there wasn’t a point in having it there.
Nothing desperate about it. It’s a smart choice to have it there.

People are rightfully pointing out, indirectly, how absolutely bitter and grudge-holding you are.

Rejoin us in the Great Link, Karak. EMBRACE YOUR DESTINY AND BECOME WHO YOU WERE MEANT TO BE! ;D 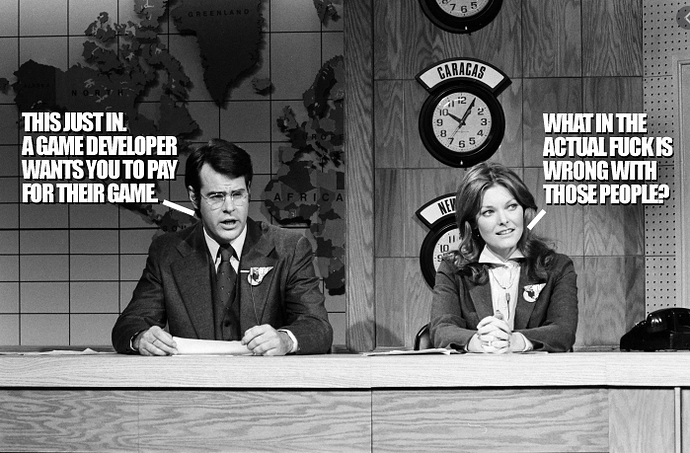 The worst thing was (when I still have been playing) is that being Omega didn’t safe you from ADs everywhere. It’s like the same intern was working on adding ADs in the whole game for years while being totally unaware that some players already have paid and do not need to be reminded…

being Omega didn’t safe you from ADs everywhere

??? Really. The only ads I’ve seen are the NES ads on bilboards, and those are quite unobtrusive and easily ignored. Are there more that I’m missing?

OMG selling subs to their own game. HOW DARE THEY