Ok, has anyone figured EverMarks out? I understand that you basically trade a ship for points. The question I have is, are there any other Agents besides IRIS? She can only be bothered every 24 hours. Do any other the other Member Corps. have Agents?

Any help would be appreciated. 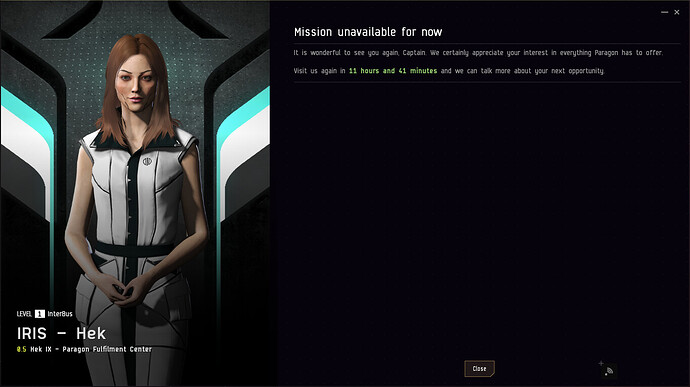 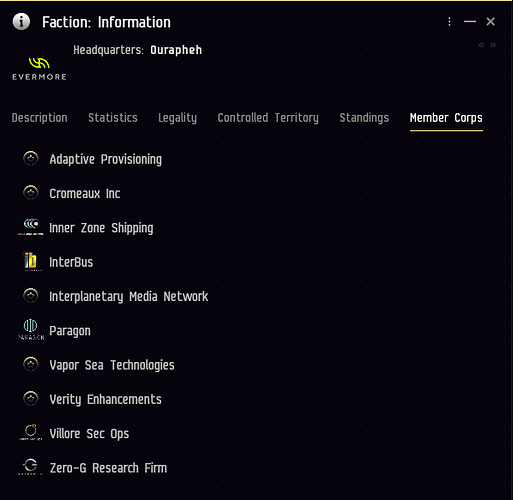 The question I have is, are there any other Agents besides IRIS?

No, and there’s only 11 of them in the game. I believe they’re an AI entity and have a Hive Mind, so you can only access one agent within a 24 hr period.

IRIS will eat all of our ships

This is a great way for ship producers in high sec to make easy money. I’ve tested it out and the IRIS agent only asks for T1 frigates, T1 destroyers, and T1 barges. If the agent asks for a 40 million ISK barge, for example, just decline the offer and keep re-rolling it until it asks for something you either have or can afford, like a T1 frigate.

High sec producers and new industrialists need to take advantage of this and build 100 of each T1 frigate and destroyer and put them on the market in Paragon stations for players to buy and turn in for Evermarks. Easy money.

You cannot, however, circumvent the 24 hour waiting period after turning in a ship…

I received 4,000 points for a Retriever…I bought the Alliance Logo and it turns out to just be the generic 5-star configuration. Money well spent…NOT!

So, I take it no one knows the end game here?

The end game is to create a mineral sink that helps drive the economy because not enough stuff is blowing up the conventional way, i.e. “most people are peaceful and just want to do PvE, but miners keep leaving the game for some reason because their profits are somehow “mysteriously” still going down, and apparently no one has any clue why that could be.”

because not enough stuff is blowing up the conventional way

When people become rich they fund wars to get their way. Have you ever read a book? You seriously don’t think the game can survive without HS ganking?

Without high sec ganking, PVE miners and mission runners would never lose ships, which means they would never have to replace them. High sec gankers would also no longer lose a thousand Catalysts a week, which makes it pointless for ship producers to even bother making them for sale in high sec.

Without high sec ganking, everyone and their dog would flood to high sec and strip mine every last ore and ice belt in perfect safety, flooding the market with ore and ice products and reducing their value to nothing.

So, you get what we have now with Paragon. Not enough ships are being destroyed, and the producers need someone to sell their ships to, so CCP made it to where players can buy them to turn them in for Evermarks.

If high sec became perfectly safe, CCP would have to do the same thing for ore and ice. They would have to implement an NPC corp like Paragon that would purchase ore and ice from players. And that would be the end of the player-owned economy of EVE…

And the risk to that is so low in the outlying HS systems. (No, not +50 jumps from jita) It’s a shame.

Without high sec ganking, PVE miners and mission runners would never lose ships, which means they would never have to replace them.

Wait just a minute…aren’t you on team, “More noobs get killed by NPC’s than gankers in HS”?
You guys sure chain your tune a LOT!

Wouldn’t that end the need or desire to mine? Isn’t that the point of ganking miners?

They would have to implement an NPC corp like Paragon that would purchase ore and ice from players.

No, it’s not a great idea. Players have controlled market values in EVE since day 1. That would fundamentally change the way the market works. Some people just won’t be happy until EVE is so changed from its original form that it is unrecognizable…

Players have controlled market values in EVE since day 1.

Do you really believe that? It’s simply not true.

EVE’s economy is often referred to as a pure free market, but that isn’t technically true. At its heart, EVE is still a game designed and implemented by a team of developers. All MMO economies require some degree of control and intervention for the game to remain playable. In EVE , this comes in the form of careful balance of supply and demand via changes to game mechanics and drop rates. There are also a number of more direct passive influences on the market, such as NPC market orders and insurance.

Yes. For example, the new navy faction BPC’s that you get in faction warfare. If FW players got together and decided to charge 5 billion ISK for each BPC, that’s what you are going to pay for it. Either that or join FW and get the LP yourself.

As far as CCP getting involved in the market to “stabilize” it, that is a joke. Nullsec enjoyed a decade of over-indulgence as Rorquals sucked up trillions of ISK worth of minerals, leading to the proliferation of super capitals that we see today. And when they did finally get involved, they swing the pendulum too far the other way and made mining in high sec all but unprofitable, and made resources so scarce in low sec as to hardly be worth the effort…

As far as CCP getting involved in the market to “stabilize” it, that is a joke.

Isn’t that a direct contradiction? “They” swing the pendulum…

EVERMARKS -- why so difficult? General Discussion

Can you sound like a woman? Seriously, back on topic. Why does CCP limit Paragon missions to once every 24 hours? If we want to throw ships away in exchange for a silly logo, we should be able to do it “on demand”. Other agents (aside from EA) allow you to request a new mission immediately after you complete your current mission. Why the limitation?

Why not disable the “Rent Office” tab? 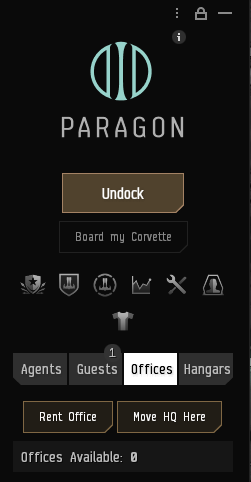 Am I reading this wrong or is it a bug? 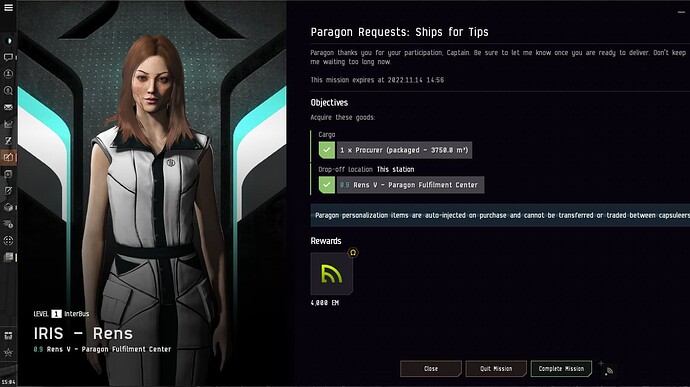 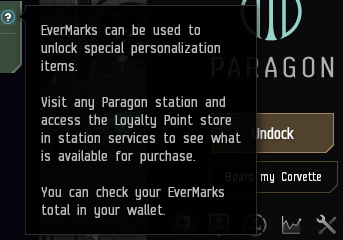 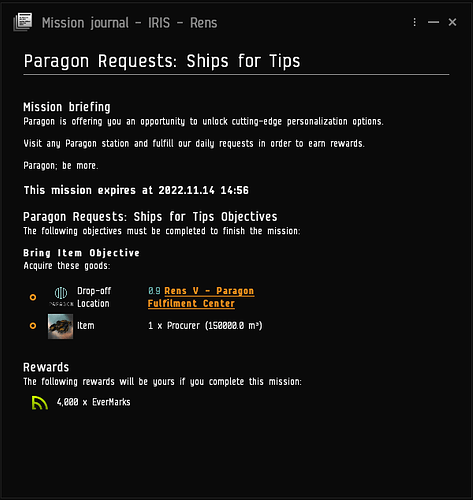 Maybe it’s a glitch in the Matrix?

glitch in the Matrix

It doesn’t specify that it’s an accumulation of LP’s, but that would add up. The problem with that is, you have to dock at one of their stations to get your actual balance.

*I went to the Test Server to investigate…

The balance works in the LP store after making a purchase, but my wallet shows the total that I’ve earned. I’m not sure it’s by design.