There is a poco you can place stuff and take stuff from there.

There are two player owned structures at at Kemerk, a Raitaru and an Athanor. I’ve been to both. Neither of them has my materials. Am I missing what I’m supposed to be doing? Like I said, I warped to the customs office in space, but it doesn’t have a dock function.

you don’t dock with it you open its cargo fly to planet at 0 right click customs office access customs office. Launch your stuff from planet view and it will appear in there. 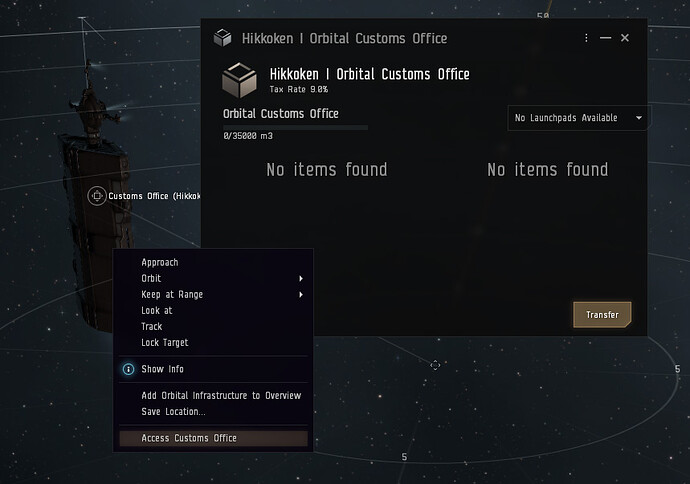 Another name for a customs office is a poco.

For any other newbs, once you’ve used the Transfer function (or
dragged and dropped) stuff from the right pane to the left pane of the Orbital Customs
Office window, you drag and drop items from that window to your ship’s open inventory cargo hold.

On a side note. Don’t warp to zero. There can be a good chance of getting tangled up with the poco and not being able to warp away quickly. I make bookmarks apx 2k away which leaves me enough room to grab my stuff while alinging out for safety reasons.

And for higher tier goods you can also do it the other way around!

Fly the goods towards the POCO, put them inside, drag them to the right and it will be moved to a launchpad on the planet surface (for a fee) where it can be processed into higher tier PI by your factories.

On a side note. Don’t warp to zero. There can be a good chance of getting tangled up with the poco and not being able to warp away quickly. I make bookmarks apx 2k away which leaves me enough room to grab my stuff while alinging out for safety reasons.

This is good advice.

Well, partially. For me it’s the other way around.

I used to make bookmarks on the POCOs at 0 to warp to and I regularly got stuck inside. But a few moves of home systems later (and resetting my PI) I was a bit too lazy to yet again set up bookmarks and noticed I could warp to 0 on the POCO.

Warping to 0 on the POCO has never got me stuck inside, unlike the bookmarks. I guess this is because warping to 0 lands you in a sphere 2.5km around the object of your destination, just like it does at stations and gates, rather than a sphere around a bookmark at the middle of that object, so you have more space to not get stuck in.

Long story short: warping to 0 at POCOs works fine for me.

But if you do notice you get stuck, making a bookmark 2km away (not at 0) of the POCO is a good idea!