Planetary Interaction - Does P2->P3 (or P4) ever make sense?

So far, I just haven’t been able to get the math to work. I see tutorials like this one:

Extraction: For Extraction planets, I use this setup. It requires export roughly once a week. Raw materials come into the Silo, then out to the factories, then back to the launchpads. This can be built with Command Centre Upgrades IV on all but the biggest planets. Drop a factory on huge gas planets. [extract] (NOTE: What follows requires Command Centre Upgrades V and a smallish radius planet. For CCU IV you will have to drop some factories from the setup) For a P1-P2 planet, four launchpads…

But, the problem I run into is apparently the Jita market price for P3+ planetary commodities does NOT exceed the Jita Market price for the equivalent best prices for potential P2 commodity inputs.

For instance:
3 Transcranial Microcontrollers = about 216,000 at Jita sell prices.

Because it requires Precious metals and Reactive metals as part of the production chain, and it requires 20 P2 product, we can say that:
20 Mechanical Parts = about 245,000 at Jita sell prices

Does anyone know of any P3 product that actually outperforms the better valued P2 products?

The numbers get even worse when looking at them from the Production Chain.

So, to fully buffer (and compete with) a P1 to P2 production chain, you need to get your numbers down onto the 1 hour cycles.

From the cited resource above it looks like 8 P1 factories is achievable, but probably not more???

No single planet can fully buffer the production chain of its commodity to a P3 factory, so some planets are lost merely to buffering.

Anyway, as you can see a massive amount of resource goes into P3 production, and the value, as far as I can tell, never exceeds the result of simply devoting 136 P1 factories to a P2 commodity (or several P2 commodities).

Can someone help discuss and sort out where I am at with this thought process, and explain if there’s a viable path to P3 production?

Addition to this question:

Perhaps it only makes sense when maximizing your production in the highest value, but buying and importing the other part of the recipe?

If you’re selling your PI, it makes sense to stop at P2. You can easily make profitable P2 items on individual planets with low maintenance - even in Highsec. P3 makes sense if you consume it yourself. I make T2 drones which consume the Robotics and Guidance Systems I make. P4 really only makes sense if you’re building structures or structure components. It’s bulky and generally worth less than the P2 required to make it.

https://www.fuzzwork.co.uk/pi/ may be of use.

Thanks this is MUCH more useful than that Adam4Eve I was using…just more clean and easy to read.

https://www.fuzzwork.co.uk/pi/ may be of use.

P3 … outside of robotics and guidance computers they don’t have much use and I wouldn’t be surprised if most ppl went p2->p4.

I know that P2->P4 makes sense but YOU WILL HAVE TO DO YOUR OWN HOMEWORK.

I know that P2->P4 makes sense

I don’t agree yet that it does from a market perspective. In the market it seems that P2s are more valuable than P3s or P4s. Probably because as has been noted before. P3s and P4s are consumables for other things and P2 suppliers are supplying the market for those inputs.

There is no market demand for P3 or P4 it seems at this time.

I don’t agree yet that it does from a market perspective. In the market it seems that P2s are more valuable than P3s or P4s. Probably because as has been noted before. P3s and P4s are consumables for other things and P2 suppliers are supplying the market for those inputs.

There is no market demand for P3 or P4 it seems at this time.

No market demand huh…
There is market demand, just not for everything.
And P2->P4 makes perfect sense … IF you have done your homework (and have access to low tax pocos).

I will challenge you to find one P4 that does not sell cheaper than it costs. I will admit if I find one. When I get time to look. Theres not that many P4s to go through.

As I said - YOU DO YOUR OWN HOMEWORK

I bet you’re full of shjt or its 1000isk more. Hardly worth it. You mentioned taxes after all. I dont have to care about taxes for P2 because the value added per hour is massive for many P2s.

The sampling of P3s and P4s I did were all negative

I dont even think the p4 profit tables are correct because they are demonstrably wrong in fuzz works seen here. The underlined in red I know to be negative, not profitable. 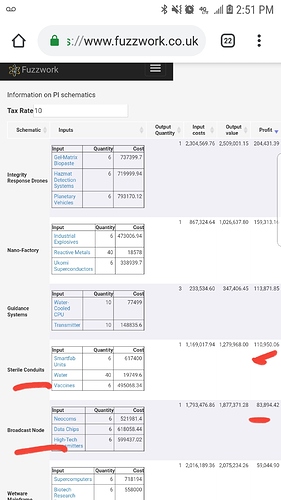 Sure if I had x-isk amount of inputs and in 1 hour create y-isk amount of output I could claim a profit. Of y minus x. But the market does not reflect the true value of x-isk input.

Are you telling me I should give up 1.9 million isk an hour in P2 so I can produce 1.9million in P4?

I’m not off by a factor of 10 unless we disagree that p4 requires 12x4hours. Which I think I might have done my P2 at 12x2hours instead of 12x1 hour. Which I will chock up that potential error being at work sadly and dont have time to troubleshoot atm.

But per the discussion I’m more interested in best value…I suppose…and will use that as a definition for what makes sense.

I’m almost certain that is correct.

This means with the production required to make 1.9million of Broadcast nodes you could have made 3.9 million in superconductors.

The considerations are can you harvest enough for that much superconductor? And do you need p4 for personal use?

I dont see a market reason to make p4

Your reasoning is faulty.

Maybe P2 > P4 doesn’t need to make sense. The big benefit of making P4 is it’s relatively small volume in comparison with 3, 2, and 1, so P4 is really easy to move to market from null sec whereas the others can be a logistical nightmare. P4 therefore has it’s reason to exist even when it’s losing money by building it.

I do complete P0 to P4 production. In one system on 5 planets. Its not efficient, its not maxxed out for money. But it is perfect timed for me. I only need to jump clone there once a week, haul some stuff (one trip to every planet only), get my P4 to a station and let Black Frog bring it to a tradehub every couple months. Easy money, lowest effort.

But this is not what you want to do.