PVE Campaign - Lessons from Homeworld and other AAA titles

I’ve spent the later half of my evening watching the story of Homeworld: Deserts of Kharak and felt it semi prudent to point out some of the main features which make games like this successful (since it’s likely we’ll be getting a pve focused expansion sometime after CCP is finishing up with their current fw iteration.)

Beyond the ever important aspect of gameplay being king, what titles like homeworld, blizzard’s successful titles in starcraft and warcraft, and the various bioware games have in common is an immersive player experience with fully voiced dialogue.

Now, I understand this can be expensive, especially when a company hires foreign voice actors. There are, however, some alternatives.

Firstly, Aura is a computer, you can easily justify using an ai voice program for her. This should help with immersion on mission debriefing. However, I highly suggest where ever she’s used in this manner, you take a page out of the mission debriefing from the above video, rather than the current EVE mission text. A lot of that is filled with irrelevant information. (So much so, that most people don’t even read it.)

Secondly, It’s not necessary to hire English (or other specific localized) voice actors. Just having any audio at all will draw the attention of the player, so it’s perfectly fine to use local islandic voice lines with localized subtitles if you want to hire a professional voice actor.

Lastly, I’d like to point out there are many people in the community that would gladly volunteer to voice some lines. The dominion trailer (which, if im not mistaken, had lines voiced from players) was absolutely incredible. When the Russian fc came on screen and just said to burn them all, we all got chills. It was an incredible moment.

As for the other lessons we can take away from these other successful games. PVE needs to be compelling. Campaign missions tend to try to make the player solve puzzles or approach a problem in a unique way, rather than just brute forcing a solution.

Current EVE combat missions pretty much have the player go to the location shoot some stuff and then leave. (This is the case for all combat pve in EVE.) For repeatable missions, at no point should we be saying, oh, I’ve done this one before. Once the player “solves” the formula, the process becomes rote and interest declines.

For combat missions or other pve sites, we can improve the process by creating dynamic filters.

A dynamic range of ships could appear in these instances, rather than the static numbers we’re currently used to. Mission objectives could vary, from just killing everything, to running a hacking module on some site asset, to delivering marines and using a skinned version of the hacking minigame (once the marines have been delivered to a location) to clear the objective.

Changing objectives, is also something that could happen. If you go into the site with one objective in mind, whether it’s to kill enemy ships, or secure a package the mission could update with a new main or optional objectives given to the player by aura or the mission agent.

Combat missions don’t need to just be kill quests. King of the hill, location defense, asset delivery / retrieval, convoy protection, ai fleet ops, are all viable options. And since the mission system would be dynamic, any particular mission could have any number of these objectives… or all of them. 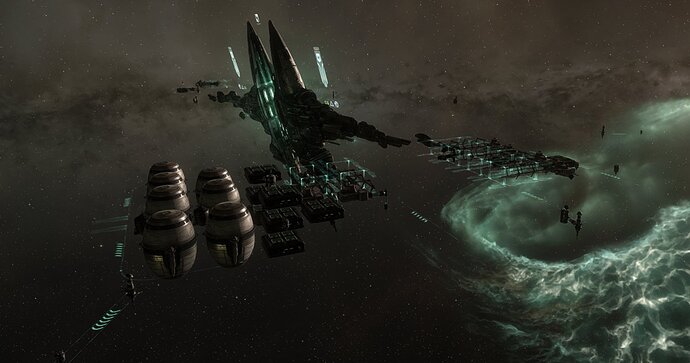 1648×869 150 KB
The locations as well don’t need to just be in deep space all the time either. I suggest some more static structures be placed around the system, and certainly more that exist around the stations and gates. When a mission or cosmic anom is created, maybe some of these locations can be near populated locations. Defending some station’s commercial or military property could be an interesting addition to our current mission set.

The dynamic nature of the mission system I’m proposing wont be a problem for mission debriefing either. Each set of occurrences can have it’s own set of text dialogues that go along with the mission. If aura uses ai voice lines, she can debrief the player based on the output of the algorithm for mission generation.

So in summary, the main points we should take away from this are: A dynamic pve environment and an immersive player experience will be important for the future of EVE’s development.

PVE doesn’t need to be a grind, it can be compelling.

Thanks for the effort of writing it, but the NPC content desigers at CCP have proven for years and even decades that they are completely unable to come up with any interesting, non-repetetive, non-easily exploitable and remotely immersive PvE design.

It would only work if CCP would “license” the EVE Engine (including Lore & Names) to some other company which would create a Singleplayer or Coop-Campaign title in the EVE universe as standalone product, means: needing their own funds, having their own team. And if you complete it, you’ll get rewarded with a “Capsuleer Licence”, means you can transfer your character and some progress to the EVE-servers plus 3 months free Omega.

I’d even trust a player-driven PvE-design contest where the best ideas for missions, arcs, anomalies etc. are voted over by the community and rewarded by CCP and then implemented into the game more than their own game designers. Many other companies do that btw., doing mod- and/or map-constests for tournaments or future patches, basically asking their community for ideas and picking the best of it to improve their game.

Well that was a large portion of what I wrote about. By moving it over to a dynamic system, it can’t be repetitive since the algorithm randomly generates the mission sites. The mission briefing could be about the general location and the objective (which would be determined by the dynamic system.) Once on site, it’s not guaranteed the objective will be the same as the briefing, which is why it’s useful to have aura be fully voiced with an ai voice over. Not only to give out important information, but also to keep player engagement up.

True, there would have to be some writing involved on the part of CCP, but it would all be pretty general information. The more unique a situation is, the more it stands out and will be easily spotted as being a repetition.

example: mission generation chooses between static system pois and a deep space instance. It determines a setting of a deep space station instance, with a military shipyard (dynamically generated from over 100 different potential mission assets). The generator then chooses the objective of retrieving a vip from that station (one of 50 potential general objectives.) Once on location the generator decides whether or not the objective will continue without triggering any events, or if 1 or more or 50 potential dynamic situations happen.

Where did it happen? Who did it? What are the objectives and challenges? Why is it important? How is the player supposed to approach the situation? As you can see when you start stacking 100 x 50 x 50 x ect. you can end up with an endless potential of situations and it doesn’t require a writer to sit down and piece it all together.

The main challenge developers would have with a system like this… would be bug crushing. Since you have endless scenarios, you would have endless potential conflicts as well. The best that could be done is test each thing individually and observe best practices so some weird conflict doesn’t crop up.

As for an actual campaign, even if CCP doesn’t license the the ip to another company, if they don’t have anyone in house that could handle it and want something not dynamic, they could outsource the writing to someone who has a proven track record (such as the team at blackbird, who was responsible for Deserts of Kharak.)

I do like your idea of getting community input in scenario ideas. It would be a great complement to the dynamic mission generation.

This is such a cool idea. Like the Epic Arcs on steroids!

I totally think a fleet-based super-challenging Epic Arc or simillar, with varied spawns and fits (like diamond rats) would be a good addition to the game. Especially if it gave a rare buff with slighty behind-the-standard ISK/Hr (like really good standing bonuses or access to untradeable improved moneymaking methods)…

I really like your plan. Thanks for the effort you put into this!

I totally think a fleet-based super-challenging Epic Arc or simillar, with varied spawns and fits (like diamond rats) would be a good addition to the game.

I would just be happy with CCP teaching players about the fleet ui in the first place. The career agents need a major revamp as they barely teach the player how to play the game. I can’t tell you how many times I’ve been in a streamer’s chatroom (who’s paying the game for the first time) … and the streamer is utterly lost.

But imagine having missions that actually have npcs joining your fleet. Or you joining their fleet. I think the dynamic mission generator I’ve proposed would be fantastic at incorporating that sort of gameplay.

npcs joining your fleet. Or you joining their fleet

Oooooh I want to see this!

Following up on the idea of community generated content that Syzygium mentioned, a “mission creator” could be created for the players to assemble based off of the generator assets mentioned in the original post of this thread. All the npcs would be mercs, so there wouldn’t be any bounties attached to them.

Upon mission creation, the player / corp / alliance who created the mission would pay a monthly fee to a npc merc corporation. The purpose behind this would be asset protection or training sites for their organization’s players. I could forsee a gauntlet being used to test things like approach vectors for tackle frigs.

I suppose I should poke @CCP_Dragon since you’re the PVE guy responsible for assembling missions. The proposed idea isn’t to entirely remove your job, btw, it’s just that you’d be assembling parts of the missions, instead of the whole thing like you do right now. (Which the algorithm would dynamically assemble in the way that was proposed in the op.)

Even in a campaign setting, I think it would be wise to make use of the dynamic mission generator. To a lesser degree of course, but still make use of it a little so the campaigns retain more replayability.

to the original post. If CCP can use tech like this, it will make PVE immersion much stronger. I need my Aura voice back, laughing at me because I died.

Aura voice back, laughing at me because I died.

What do you miss about Eve that is now gone? General Discussion