Question From a Newbie

As I am first starting my career as an manufacturer, I realized that I can only do one job at a time in the same station. Is it normal? Is there any sort of facility allowing me to actually do multiple jobs at once?

I am level 3 at mass production level.

This is not normal and should not be the case. Do you maybe try to use the same blueprint for several unique jobs at once?

I was doing different T1 manufacturing jobs. I started doing item #1, and submitted item #2. They were not the same blueprint, but was the same item. I bought 4 of those blueprints. Not sure if that is the reason, but it keeps telling me that the job cannot be submitted.

It doesn’t matter if it is the same item, I suggest holding the mouse over start button, this tells if something is wrong. Is it a station or citadel? Also, welcome to eve.

It is a NPC station. I was just fooling around with manufacturing to see which button does what. I can apparently only get one job done at time.

I’ll check in a few minutes to see what it says.

there are skills that can improve this from 1- 10 iirc…

either for lab work ie research or copying, to manufacturing. I only say this cause I have 6 manufacturers and each I get 10 jobs with for anything I need to do.

Hmm, perhaps I should provide more details of my situation:

1, My account is an alpha clone.
2, My skills are: Manufacturing 3 & Mass Production 3. Nothing else.
3, The skill description of Mass Production 3 suggest that I can do one additional job per level. However, I am currently sitting in my station, and can only start one job at time.

Don’t get me wrong, if it is normal that I can’t start 4 jobs at once, in the same station, I’ll understand. It is an alpha clone after all.

actually idk what restrictions apply being an alpha clone… you will have to wait till someone knows more than I on that . cheers

With Mass Production 3, you can submit up to 4 manufacturing jobs - as an Alpha you can use the skills you are permitted to train.

Hover over the submit button - the tooltip will tell you the reason the job can’t be submitted. Common reasons:

If this doesn’t help use the Windows snipping tool to paste a picture of the industry tool in the forum thread so we can see what’s happening.

also to add, idk if this was mentioned but if you use a bpo or bpc, you can only run one job AT A TIME per print or copy. If you are using an original, you will need to first, make copies, then you can run the copies till your skills content.

Ok so I only use orignal blueprints, I can’t use like, 4 originals, but have to do 1 original and 3 copies?

You can use 4 originals. As long as you are using a different blueprint for each job, you’re OK.

It would help if you could give us a visual:

that way we can see - do you have the necessary material (top left)?
do you have unused production slots?
Do you have all skills required by the blueprint you’ve chosen?
If the start button is red - hover to see why.

Here is a picture of what I am describe. My mass production level is 3, so theoretically I should be able to do 4 jobs at once. I don’t have any running jobs. However, as you can see there, I only have 1 job available. 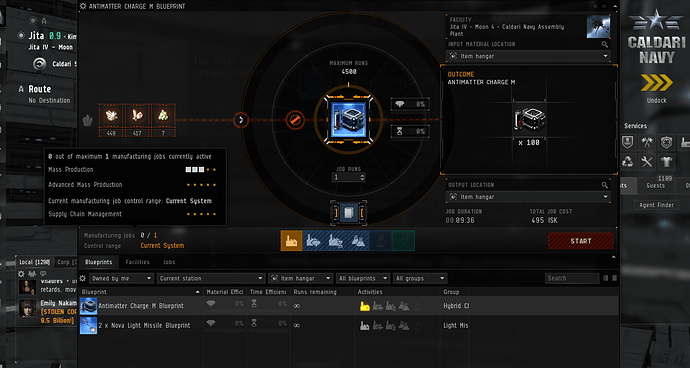 I’m not sure what’s going on with your skills, I can run nine jobs - although I’m an Omega with L5 in Mass Production + L4 in Advanced Mass Production.

The issue for this particular job appears to be lack of material. The fact that you are showing 0 of maximum 1 manufacturing jobs with mass production 3 is problematic. That skill level should permit 4 jobs and a quick google search turned up nothing to indicate this should be any different for Alphas.

I would file a support ticket and get one of the GMs to explain or fix the restriction.

Indeed. I just checked with another account of mine with exactly the same stats. This one can do 4 jobs… weird.

It turns out that it is more like a case by case situation, not systematic. I’m guessing lag or delay between what I see and what the server perceives. Either way, I’m filing a ticket addressing this issue.

You can try clearing your cache (Settings menu -> Reset Settings -> Clear all cache files). It can help if the client and server get out of sync. Will force a restart of the client.

Wow. Is that even a thing?

Has this really happened before? Like, you have the required level on paper, but can’t fly the ships, etc.?

I’ve experienced situations where the server knows I’ve achieved something but the client hasn’t caught up. I have seen posts from people who try to use a skill the instant the client says it completed and it didn’t work. Data replication between client and server isn’t instantaneous. Sometimes clearing the cache will fix it, sometimes logging off and back on. After that, it’s time for a ticket!

When you consider we have tens of thousands of players from a hundred or so different countries connecting to the same server over internet connections that don’t offer a guaranteed quality of service - it amazes me the game works as well as it does!

Yes I’ve experienced it myself on several of my toons and heard others talk about it in NPC corp chat that once they’ve trained drones V they could not use 5 drones without signing off then on again.

Same happened to several of my toons with infomorph psychology as without loggin off then on again the game did not recognize my newly trained ability to be able to install jump clones even if I’ve undocked then docked again so had to re-login to make it work, though as far as I recall it did not happen to every single one of my toons though I am not 100% sure about that, but it surely happened several times I clearly remember that.