Since i’m sure a lot of people here can agree the new launcher design leaves a lot to be desired I have come up a with what I think is a pretty good/simple design that should satisfy most people.

I’m somewhat hesitant to make this suggestion because it would mean another launcher update and we all know how much agony those are.

But in the name of progress I present to you the 3 light design… which accomplishes all the goals of notifying the user of launcher progress , doesnt annoyingly pop up a new bar of text and resize the launcher window, does not require transcription of multiple languages, is intuitive and tbh would actually look kinda nice (could look a lot nicer if someone used something besides photoshop to make it) 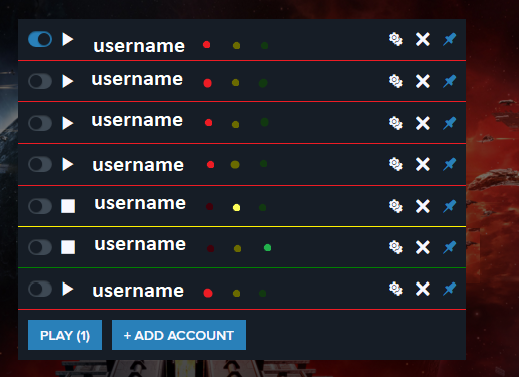 What do you guys think?

When I was with Microsoft, we dealt with this issue, and we poll tested users on what we called the “traffic light” system you describe. This system got top polling numbers for understandability and personal preference, so we rolled it out in a lot of products, such as Microsoft Baseline Security Analyzer (MBSA), for instance.

Yes, we found that the traffic light system rated very highly, and was generally well understood and well received. The fair question remains, however - is it a strong and valuable enough change to the Eve Launcher to warrant the launcher hell necessary to implement it?

I believe CCP thinks there is some value to it, otherwise why have they changed the current design to include more information about the launcher progress? That at least suggest’s they have some sort of intention in that area but the fact that they were not easily able to see how no one would really like the new design suggests not very much effort goes into these things.

I believe CCP thinks there is some value to it, otherwise why have they changed the current design to include more information about the launcher progress?

It’s not so much the info that people are annoyed about, rather the irritating way it’s displayed. Currently the info pops up between the client list entries in a way that causes the rest of the list to shift down temporarily, making it irritating to click them in a quick muscle memory kind of way especially with multiple clients to start in different configs.