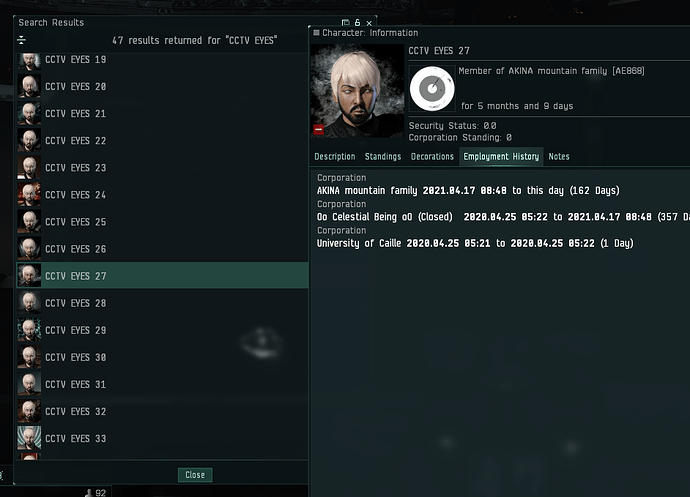 this player also control another series of ALTs which are

ok, they can all be controlled by the same person. whats the problem?
@Roy_Un_Luo please do not spam the forums with the same topic in two different locations.

a normal human would recloak instead of logging off.

Why wouldn’t a bot recloak as well?

watch the youtube video before ask any question. you believe what you believe. same as I do

a normal human would recloak instead of logging off.

pretty sure it would be easier and more effective to make an bot cloak than have it log off.

people working against you isn’t evidence of them being bots

pretty sure a bot selecting F1 and a human look the same.

watch the youtube video before ask any question. you believe what you believe. same as I do

pretty sure a bot selecting F1 and a human look the same.

I am sorry, it’s not the same thing

people working against you isn’t evidence of them being bots

you are right, but logging off 4 chars in a row? I can hardly believe human would do that

I am sorry, it’s not the same thing

oh? what is the difference?

you are right, but logging off 4 chars in a row? I can hardly believe human would do that

its really not that hard.

I’m not saying that he’s not a bot, only that they evidence provided is lacking.

Anyway, he may be logging off instead of recloaking because he’s at work or asleep. So, he saves the ship, but he doesn’t want to keep having to recloak.

And he might be able to respond so quickly because he’s using some sort of intel tool that rings an audio alarm if a mobile observatory shows up on an overview. Now, I’m not here to discuss whether or not it should be against the EULA, because that’s a whole another can of worms (and also probably something that would be next to impossible to enforce). However, I do know that there are already intel tools that do that for neuts being reported into intel channels and/or showing up in local, and that would certainly offer an explanation for the quick reaction time.

Now, if you truly believe he is a bot, then report him. CCP does not ban on player reports alone, and will investigate. However, the evidence that you have provided so far has not been very compelling.

And, just in case it wasn’t clear, there is absolutely nothing wrong with multiboxing all those accounts. It only becomes a problem if he uses bots or input broadcasting to control them.

oh? what is the difference?

its really not that hard.

I know, it’s not that hard, but it’s abnormal. anyway GM will decide 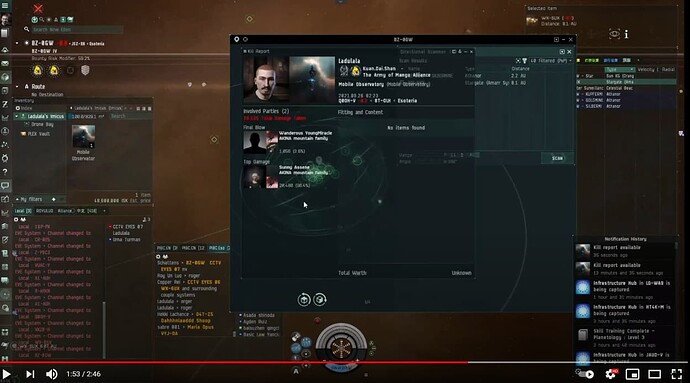 Report and let CCP take a look at it.

I just drop two Mobile Observatory it got killd in a second. Are you sure those pepole are really afk?

I didn’t say they are totally AFK. they do have human players behind the desk.

However, log off right after Mobile Observatory deployed is really weird and inhuman action to me. that’s why I created this post.

I have made 4 videos, logging off 4 char in a row after spot the Mobile Observatory is just extremely Suspicious

again, I am not saying they are all bots, but I believe they do use third party software control a part of the sitters

thank you for your reply
yes, I only have 30% kind of feeling, the logging off thing is bot action.
so I gave it shot.
let’s leave these matter to GM to decide

As no one on the forums is able to deal with this issue, I recommend filing a support ticket about the issue. As such I will be closing it. Thank you.