Coming back to try the FW changes, questions about how it works now.

Thanks, just want some clarity on the faction standing hits before I do this.

Hey @Diamaht_Nevain - Faction warfare - EVE University Wiki is a good read to understand the “Permanent war state” you will be in if you join.

just go to amarr if you do

You signed up for war, so war is what you are going to get…

You won’t be locked out of Jita, but you will be an enemy of the state, and faction military/police ships will chase you if you linger. Additionally you remain a valid target for any faction war participants.

Thanks, that helps. I was thinking more along the lines of exiting later on. If I do one faction does that still cause permanent faction hits to the other two? Meaning, even after leaving FW, I can no longer run missions or interact with Caldari or Amarr Systems forever since my standing are trash. That’s how it worked a long time ago. It took me forever to get my standing to the point that Caldari npcs wouldn’t attack me when going to Jita.

If so then I can see why no one wants to join the Gallente side.

Yes, you will incur a permanent standings hit. It doesn’t magically disappear once you leave faction warfare. You’d have to get your standings back in good favor the old fashioned way…

Ok, so it’s still broken. Not a huge issue since we can do alts and all, but it still punishes Gallente and Minmatar since Caldari and Amarr have the two major trade hubs. It’s why you see the huge disparities in FW populations.

Not a huge tragedy I suppose, just disappointing.

On the other hand, I suppose joining Gallente would be the best way to live a sort of High Sec Pirate life since all the PvEers will join Caldari so they don’t wreck their mission running status forever.

It’s not broken. It’s working as intended. Why would you expect your standings to stay in good favor if you are actively at war and killing troops from the other side? Players want to be involved in faction warfare, but don’t want to suffer the consequences of doing so. You either want to war against opposing factions, or you don’t. Can’t have it both ways…

I get it man, you are super hard core. It was obvious from your first veiled hostility reply.

Yeah but it means training two toons. Its an extra step and daily hassel that only half the population has to account for. Its not a huge deal really but it does account for the 70/30 Gall/Cal split that I’m seeing. That can’t be healthy for FW in general.

You can still engage in faction warfare by ganking people who joined it.

True, they basically have a legal form of high sec piracy

Hold on a sec. If you just do FW as a solo player in the militia, the only standings you will lose are those from enemy pod kills and promotions. Ship kills are unpenalized. Complex capturing is unpenalized.

I have been doing FW for years and my Amarr Empire Standing is just as negative as it was when I derived those standings from doing Minmatar career agents.

but it still punishes Gallente and Minmatar since Caldari and Amarr have the two major trade hubs.

Trade hubs are a consequence of players, not of CCP Games.

On the Gallente side, there are a few organizations (not just individual players – whole corporations) dedicated to stocking nearby markets for the FW zone with nearly every item you could ever want. Sure it’s “not Jita” but the prices are controlled by these cartels to only have a modest hauling markup (5-15%) over Jita prices. And it comes with the convenience of: being right near the warzone (if not in it), and paying ISK to (and therefore rewarding) FW sympathizers/supporters on the Gal side.

I don’t have firsthand experience of it so this is secondhand knowledge.

I’ve been producing and fighting for the Minmatar for a few years now, and I’ve never had to go to Jita for anything in that time frame.

I don’t fly captials, but I’ve flown almost anything under except mauraders and blackops and even still those hulls exist between dodixie rens and hek.

Like the above poster said, this isn’t a broken mechanic its player choice and consequence.

They are a lot more expensive in Hek and Rens than in Jita. Especially rarer items like faction stuff, pirate ships, and T2 midrange shipslike Command Ships.

Even if price is all you care about, it still shouldn’t stop someone from fighting for the FW side they really care about, because hauling is so cheap:

Cheapest price of a Sleipnir right now in Jita: 302M

Cheapest price of a Sleipnir right now in Hek: 353M 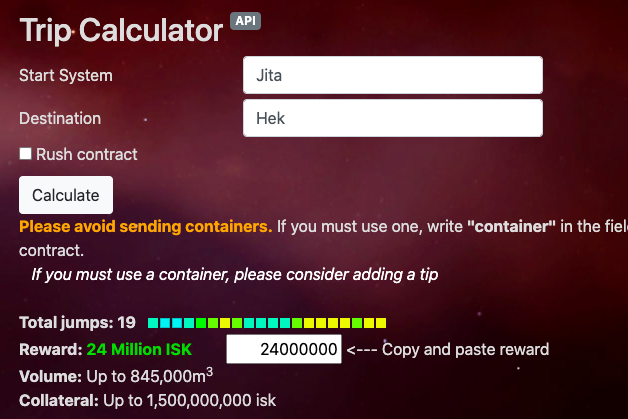 You can pay 353M right now to support the Hek local economy or 326M for the jita price plus the 8% hauling markup. The haul from Jita can be amortized further if you buy fittings and stuff there because the 24M haul fee is a flat rate and the Sleipnir hull is not even close to the 845k m3 volume limit and 1.5B ISK collateral limit, so it is at worst an 8% markup with 1-or-2-day-ahead planning.

So you can pay slightly above Jita prices and still be in the Minmatar militia if you truly don’t care about supporting the local Hek economy nor want to have neutral hauling alts – just need a market alt sitting in Jita (and alpha works fine for this) and patience/planning ahead 1 or 2 days for the Redfrog delivery.