A fleet of combat ships led by the Arataka Research Consortium commander ‘Dutchgunner’ was spotted today invading Triglavian Relay sites that had been secured by the Caldari Navy in Athounon! The most alarming part of this discovery is that they were directly collaborating with traitor capsuleers that align themselves with the Triglavians to steal data and resources captured from the Triglavians!

The fleet was observed intruding into at least two of these sites with combat ships and an Astero class exploration frigate to pilfer the relays despite warnings over open channels by both the Caldari Navy and a State Protectorate pilot in the system.

The only response from the ARC fleet was from the Kybernaut pilot ‘David Duelll’ and was solely comprised of pro-Triglavian propaganda with no opposition made by other members of the ARC fleet. 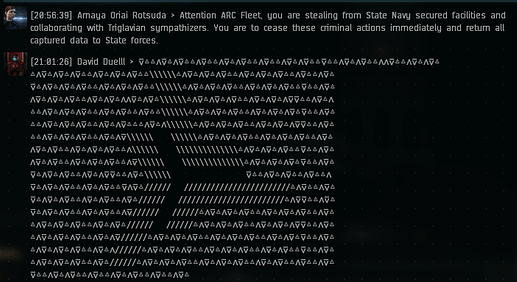 The intentions of ARC should clearly be brought into question. Openly working with Triglavian supporters and involving them in unsanctioned invasions of Triglavian sites secured by a member state of EDENCOM. It would hardly be a leap of faith to believe that any captured date could be returned to the Triglavian collective by ARC.

Additionally despite conducting several experimental bombing operations on Triglavian facilities in the past, purportedly on behalf of the whole of New Eden, the correlation between that operation and the following increasing military activity in Pochven observed recently is of grave concern for all members of society.

We should not forget the EDENCOM personnel that lost their lives in the system prior to the exposure of their operations, nor the brave Caldari Navy crews murdered by rogue pilots enticed by ARC’s unscrupulous bounties during earlier operations.

ARC’s actions today run directly counter to the interests of New Eden and, as a Protectorate pilot commented, “Spits on the military lives lost by all sides in Athounon.”

Love to see it.

This report is deeply troubling. ARC appears determined to remain on a collision course with the State. Previous piratical offenses stemmed from a reckless indifference to human life and a burning need to stoke their own reputation by ‘breaking the story’ first; no such motive suffices here.

Collaboration with kybers seems too incredible to believe. Even I am inclined to think there must be some mistake.

We may never know - while ARC would be wise to issue an explanation as soon as possible, I expect they will not. Previous criticism has shown a deflection onto character of the critic or outright hostility is the most likely response.

This is a crime against the State. Appropriate standings have been set for these terrorists.

Goodness! Next they’ll be saying EDENCOM is collaborating with Nation because of me.

First putting bounties out, now actively attacking Navy personel? And they’re supposed to be working for the benefit of the empires? I guess they weren’t happy with the outcome of the bounties, and decided to take a more direct approach.

Or maybe they’re just working against the State? That seems to be who most of their recent operations are directed at.

How scandalous. One would think an official word would be released about this by now…

Please explain which part of the events were the perilous ones.

Perhaps you’re just afraid the ARC researchers will uncover the secrets of the Triglavians before your State flunkies can.

Is the self-determination afforded to us by immortality lost on so many?

I’m baffled by how many capsuleers seem unable to comprehend those of us who do not slave ourselves to a single polity – not an ideology they and others may follow, but a single faction.

Can a Kybernaut who aligns himself with the dialectical philosophy of the Triglavians not also have an interest in seeing what other capsuleers could achieve, using knowledge gleaned from Triglavian technology claimed only in name by one of the Empires? So much information is shrouded by these nations; I any who seek to expand what our empyrean kind know of the world we inhabit.

If everything remains static, and no new developments are made, we cannot hope to realize further procession in the flow of Vyraj. Historically, ARC fervently pursued the theorization and expansion of capsuleer knowledge, beyond any trappings of the Empires – even when it attracted controversy.

While in my opinion ARC’s adherence to EDENCOM during the Liminal Provings contrasted heavily with this core motivation, I’m deeply pleased to see that a spark of this spirit remains, and applaud that they are indeed still capable of operating unbound by a fear of “making dissidence”.

I agree with the kyber. As he says, the spirit of “self-determination”, beyond the “comprehension” of the stupid, backward, unwashed masses who cannot see “the way forward” - yes, this is indeed the spirit which animates both the kybernaught and the ARC self-styled scientist.

As (s)he says, rather — is it improper for me to applaud those who don’t waste the immortal freedom afforded to them by re-tying themselves to Empires who only see us as upsetters or resources?

Stealing already-stolen data is unconscionable? Have you ever run a mission for ISK? Or destroyed a non-capsuleer ship? Most of our very ways of subsisting are inimical to baseliner life.

I speak as I do because I’m pained by seeing the most free entities of all in the cluster not be able to unanchor themselves from politics that we have no need to ascribe to.

For a major part of my immortal life, I was a member of a nullsec capsuleer alliance, proving against others for the sake of proving, finding glorification in a constant and exhilarating struggle. None among the empires desire this level of freedom in their constituency — but in the Triglavians’ perpetual proving toward Vyraj, this truest nature of we Kybernauts is encouraged.

As capsuleers, we are free.

The Empires prove against one another as we do - and all who wish to gain for capsulees as free entities are right to do so.

There is a way forward; but only through exploring and proving every path for humanity against one another will we ever determine it.

Now this makes all sense…

[SPOILER] ARC has rejected some Data Exchange with the EDENCOM Defensive Initiative Alliance in the Past.

I understand the concern about Navy facilities breached by an outsider fleet, but considering the past and current affiliations of certain most vocal State Militia members, the exaggerated concern about a kybernaut in said fleet is funny enough to make one think this is parody.

Perhaps it is time to deploy capitol ships to Athounon, carriers, dreds and Titans, supported by smaller fleets, to exact a total and deliberate justification of force against ARC.

There is nothing left to discuss. They have shown their colours on the grid. At this point the only remaining move is to adjust standings to -10 and shift the focus from these forums to the constellation.

Collaboration with kybers seems too incredible to believe. Even I am inclined to think there must be some mistake.

They would have to prove that it is a mistake at this point.

This is an interesting statement because at a basic level, most people on both sides do not have an interest in prosecuting a war. I myself was not particularly enthused by the notion of fighting in foreign systems either. However it quickly became apparent that if they cared about the people in the warzone, they would not have chosen to continue the war after we ousted Heth and returned the CEP to it’s rightful place. At this point it seems to me like occupying as much as possible will only serve to quicken the end of the conflict. Otherwise they’d just use those areas as mustering grounds for push after push into Black Rise or the Citadel.

I’m baffled by how many capsuleers seem unable to comprehend those of us who do not slave ourselves to a single polity – not an ideology they and others may follow, but a single faction.

I’m baffled by how many capsuleers choose opportunism over loyalty to their kin. Polity and ideology should not matter as much as who your people are.

As (s)he says, rather — is it improper for me to applaud those who don’t waste the immortal freedom afforded to them by re-tying themselves to Empires who only see us as upsetters or resources?

That immortality only lasts as long as the clone contracts do. I’ve seen plenty of Capsuleers die. At the end of the day they’re just normal people, and they have the same obligation to their family and their ancestors everyone else does. Dismissing those obligations out of narcissism does not do one credit.

As capsuleers, we are free.

As capsuleers we have more opportunities to commit dishonourable actions than an unaugmented person, but just because you can do something, does not mean that you should do something.

I understand the concern about Navy facilities breached by an outsider fleet, but considering the past and current affiliations of certain most vocal State Militia members, the exaggerated concern about a kybernaut in said fleet is funny enough to make one think this is parody.

Like what? The scattered few remnants of the Provist and Dragonaur movements that embedded themselves within the militia to shield themselves against persecution with a shiny combat record? Every single Militia has rotten apples, but to claim it spoils the entire barrel would be foolish.

Two ARC trespassers have been intercepted and successfully eliminated for entering Caldari State facility in Athounon solar system.
Hostile losses: 2 asteros.
Friendly losses: 1 punisher (due to misunderstanding and frienly fire from State vessels - punisher was an Amarr ally), the punisher pilot honorably succumbed to the fate instead of opening fire back to prevent any State losses. The pilot was compensated for the loss of her ship.

Names of intercepted violators:
– DutchGunner
– Valerian Hekki (pilot is set as KOS for flying with ARC)

Glory to the State!

Is the self-determination afforded to us by immortality lost on so many?

No, it’s just that anyone who claims we’re immortal is deluded.

Probably like the ex-Stribog kyber who, among other things, helped sever the State’s high-sec connection with the Empire, there in her Coercer.