Does anyone have any lore links on the history or technology of the Sanner Probe (operation, mechanics) I remember reading something somewhere but can’t find it. Also from a historical perspective, as I am a new player, have all 5 scanner probes been with us from day 1? The current list of 5 are the ones available to capsuleers, is it known if sleepers, drifters etc use probe technology? I am writing a story about a race to find lost Jovian probe technology, intrigue, deception, and a race across the galaxy type thing. Has this subject been done before? I am also interested in any graphics or sketches of probes, do we have dimensions, weight etc.
Thanks
Palis

Hope this helps.
I can not remember any chronicles and the like. However the basis of scanning technology is rather simple and based very easily in real world application. Going back to previous scanning sites where broken down to. Radar, Ladar, Gravimetric and Magbometric sites.
As such one can argue probes have at least 4 different scanning systems.
GRAVIMETRIC
Is a difficult one for my knowledge but would check for Mass in space by sending out light or radar and seeing where this bends.
MAGNOMETRIC
Would be a basic magnet field sensor these exist today just not as fine tuned and could also use the shifting of light waves. But that would require extreme precision.
LADAR
Is effectively laser radar it send pulses of lasers out and waits for backscatter.
RADAR
Uses Radio waves both Ultrahighfrequency and Low frequency waves and waits for backscatter.

Generally one needs to argue for strong batteries as the last 2 can be quite energy intensive which could also point at the limited lifetime of probes outside of a ship.
We have to assume the probes have a smart system which filters out planets etc so a computing software needs to be present. And they need to move in 3D space.

Scans from probes are also always in circles so omnidirectional scanning pattern which makes it easier but harder at pinpointing.

So in those little pills we can expect at least 1 thruster to move. 8 sensors to cover a dome upwards and downwards saying it is upright when scanning. Basic computer software to report direction and strength of bounce signal to then send via 1 TX system to the ship and one big or strong battery. 1 Electromagnetic wavesource that could shift multiple frequencies from radio scale to light scale past into infrared.

This being relatively basic in terms of Eve technology one can expect the Jove to have used similar things. Main reason being you want to map space and if you do not know where something is using triangulation mixed with detection is the best way.
It is also the reason things become more exact the more probes you use and why you should not put all probes left of what your detection but in all directions around it.

Visuals you can go by eve item you see two colored sections most likely the 2 domes with the sensors in them. I think there is a small indent shown which could be its thruster the center would hold the power bank.

Thank you @Creetalor that helps a lot.

I notice when you look at the attributes and compare them they all have a mass of 1kg, normal probes have volume attributes of 0.1m3 and combat probes 1m3 and I am trying to construct dimensions from this. The combat probes must be made of some very light material or there is some other factor to account for the difference in volume but not mass?

Within this 1kg (I can’t imagine they would be more than 60cm in length?) would be jam-packed with electronics and a small warp drive and directional thrusters? I was hoping that CCP would have done a cross section but cannot find one in any literature. I am presuming the thrusters would not be propelant based? The probes must be attached to the communications relay of the ship so they receive navigation commands to follow ship through gates and wormholes?

I presume they find wormholes through gravimetric or magnometric mechanisms?

My assumption with the Jove technology is that they introduced fluid routers within probes to communicate and provide the ability to jump wormholes without the ship. They are cylindrical, have jump drives and cloaking technology and are powered by energy transducers. The Jove use them as cartographic tools, but that is just my storyline

Thanks for the assist
Palis

There we are now I think the weight is one of those things again where the mass is one of those arbitrary numbers as 1 kg is extreme. There have been a few items with weird mass if its not a vital statistic.

WH would most likely be found by all 4 types now as all sensors would be affected by a WH, i think they were previously gravimetric before the change of the system.
Ladar was a gas site
Magnometric relic site or data
Gravimetric WH
Radar Combat site

Concerning Jove remember that almost all descriptions of ships and pods that they look grown rather than built. So your design may need to be drastically different. One shape that would come to mind would be a wafer like disc sort of like a pebble, or a sphere sort of pod like in form but just smaller and rounder.

@Creetalor thank you, that helps.
What about the dimensions if we cannot use mass or volume as real figures. Are probes 2 feet long or 20 feet long? I have looked for artwork and came up blank. I couldn’t be the only person in 15years looking for this. Could I smuggle a probe in a suitcase?
Thank you
Palis

Difficult to estimate the m3 is more in relation to Eve mechanic to be able to load certain probes in certain launchers. However combat probes would probably need more sensors to be able to detect frigates etc… Let us try a weird but simplistic approach. If we assume the volume to be the true value 0.1m3 is 100 Liters of liquid and assume we put the 100 Liters in a rectangle shape say a 100L garbage bin the dimensions would be 800mmx385mmx385mm
This could be your probes dimension. Still quite small but possible concidering they have scanning ocular implants on the small scale and nanites. Now true weight would have to assuming 100L of water being 100Kg I imagine even if 50 % of the probe being made out of a lightweight tube as seen in image the yellow tube and the metal being engineered to counter weight would still expect weight to be on the order of 20-50kg.

Taking this into account these system wide normal scanners would be to large for a suitcase but would be on a scale of a luggage bag for travel for 1 and you remember to pinpoint something in 3 d space you need at least 3 probes to map x y z axis.

I know this is throwing forward lots of assumptions of relations taking real world things and using water as a liquid reference point but it holds taking this into concideration. Now the Jove could maybe make something much smaller due to their tech.

Main reason I think mass to volume of eve seems off is the density of the probe overall would have to be 0.01 g/cm3. Water has a density of 0.997 g/cm3. While almost all metals are 1+ on the density and most plastics are slightly below water that density is very unlikely to their visual even on average. 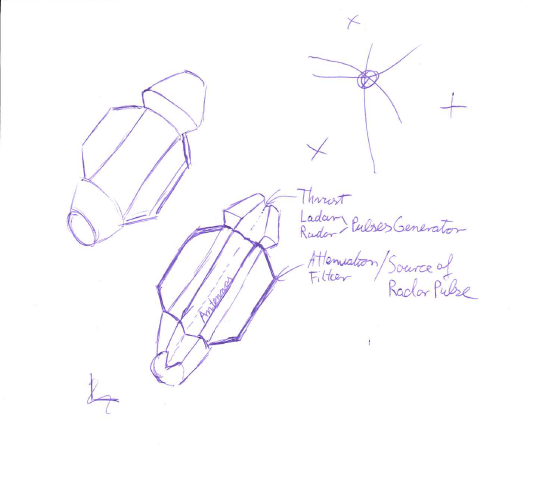 Thanks for your help. I was thinking this over too and thought I’d see how close I can get to them in-game and this is what they look like 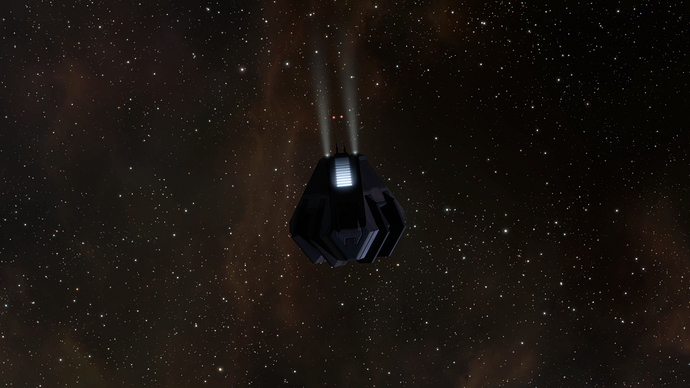 I wasn’t expecting that, I was expecting the pill shape in the menus. I ran my Astero up to it to compare its size and this is what I got from a top down view. I launched all 5 probe types and they all look the same and are the same size in space. They have two antenae at the top that flash red every 4 seconds and a power sliding scale. I have no idea why these look different from the images in the in game show info…? 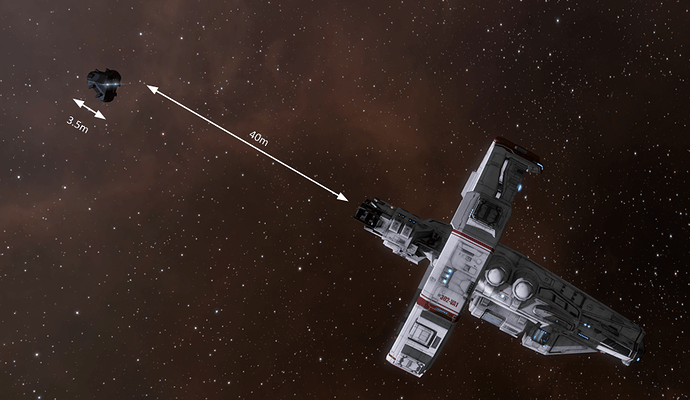 At least my pod but rounder is not far off. I expect the difference to be a oversight. Similar to bombs not looking like the bomb strapped to stealth bomber.

@Creetalor thanks for your help, I have learned a lot, which is always the outcome you want

I will go something in-between the two sizes. Scale must be a hard thing for CCP to keep consistent in gameplay but the theory I could go with to account for the fact that I can put 150 probe scanners into my Astero but also the fact that they look different in space to in cargo is ‘packaging’, that great get out of jail free card. They look like pills as you have drawn but when they are put in a launcher they are unpackaged, primed and ready for deployment a bit like a bullet. When they return to the cargo bay they are repackaged, reprimed etc. Could this be feasible?

Maybe a canister of nanites that the build it tons of nanites everywhere already.