Should I use this to haul

You didn’t say which ship you bought.

That is for PI materials. It’s not a hauler…

okay i move planetary items from amarr to Jita 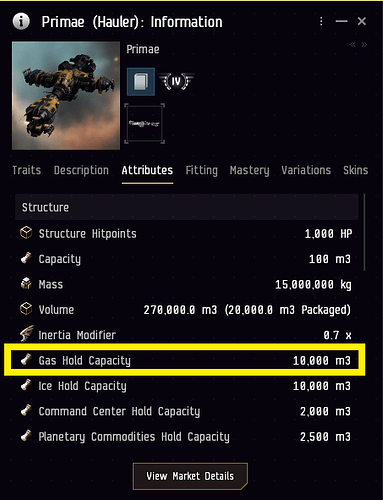 Ah, they’ve changed the stats on it. Years ago it was only for PI materials and command center…

I think they changed that years ago

I have a few of them. I don’t think I’ve so much as undocked one of them in like 10 years. It’s not a ship you normally see running around as there are much better alternatives…

EVEMarketer is market data and statistics tool for EVE Online

Secondly:
A T1 hauler, something like the Sigil or the Bestower - whichever is given away by the Carreer Agents.
A Bestower would have a tank in the region of 10k EHP. It costs about 7.5m ISK, of which 4m ISK are fittings.
25m ISK of cargo would feel outside my risk appetite.

Ganking (beyond the satisfaction of tears and a feeling of kicking sandcastles over) is a business model, like any other. The question is “can I make a profit on this opportunity?”

Back of the envelope calculations:
A gank fitted Catalyst costs something like 14m ISK, probably less, that’s Amarr prices. It does 660dps.
In a 0.5 system (Uedama), CONCORD will take 19 seconds to respond, then a tad more to kill your attacker. Therefore, one Catalyst can do about 13k damage. Enough to kill a reasonable Bestower.
On average, half your cargo and modules will drop as loot. That’s a bit over 14m ISK on the above example.
That’s pretty close on break even for your proposed cargo.
Your call.

It took me a while to write: there’s been good posts ahead of me, but it’s worth looking at the costs/benefit model for whatever you decide.

First scan down the hsec wh that should be around 5 jumps from Amarr then pop a scout though and bookmark, leave scout probe ship in some location on the other side, Return to your hauler and pop on through which should safely reduce the number of jumps between the two market hubs.

Some are good for ice, some for minerals, some for ore and others for gas.

If you are looking to haul gas, take a look at training into using Minmatar Hoarder

It’s cheap and can haul a decent amount of the stuff.

The ship I showed above is a beast for hauling small goods, We know there are ships for this and that, but you want a ship that makes it not a prime target.

and what ship is that

T2 haulers are the best thing anyone can train.

Hope OP works towards them eventually