CCP is getting rid of the skill que. Characters will instead accrue sp which players can spend on skills of their choice.

Well then, I guess there’s no need for my idea xD

Oh? Since when? I guess eve is turning into every other MMO in existence.

I really hope they won’t do that.

I like that I can just set my skill queue and forget. Now they’re going to make me manually click all those skills to inject SP into them each time I have enough SP? That’s a big reduction in QoL for me.

What is the indication that skill queues will indeed be removed?

I think it was mentioned at fanfest, something similar, that @Rail_J_kar is taking out of context most likely 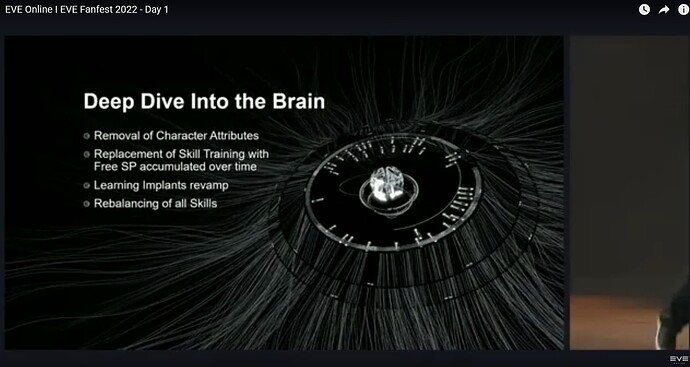 I’m not sure how they’ll have it set up, but it’s possible they may still allow you to have a list of planned skills to train, and then just a button to click to add the sp to the skill. 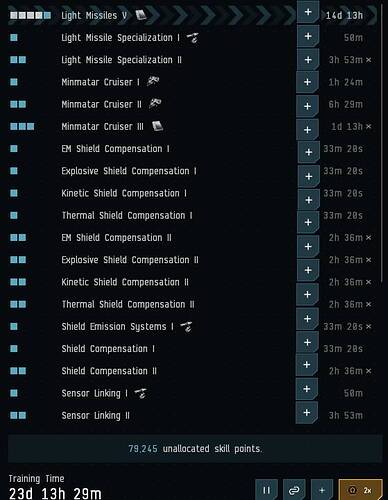 Something like that. The timer would let you know how long would have to pass for you to accrue sp to be able to train the skill. Perhaps they’d have a more elegant way of doing it, but this is a possibility.

edit: perhaps the skills that can be trained with the current sp would change to yellow (or some other color) text.

There’s two main benefits of the change as far as I can tell.

And who knows, if people say they want to keep the ability to have a training que. CCP may keep that functionality, automatically applying the sp to skills in the que once its reached the skill level threshold.

The simplest solution I see is to add a new skill called “Unallocated training” that people who do not wish to train certain skills can put on top of their skill queue to train unallocated SP.

Personally I’d also give that skill a lower skill training rate to add a small cost to the flexibility of training unallocated SP, but that’s up to CCP.

The three or four clocks when I first log on (with an ANNOYING delay in the middle I might add) are irritating enough. Now I’m going to have to piss about even more?

Yep, it’s annoying me as well.

I’d rather just log in and play, not have to keep track of if I have gained enough SP to inject into a skill. The skill queue is perfect for that, requires no additional attention apart from setting it up in advance once.

No, that’s weird, and it doesn’t solve the issue of training new players about the skill que at all.

The simplest way, would be to keep the current que and have a check box (that’s on by default) that applies unallocated sp automatically to skills at the top of the que once it reaches the skill threshold. For people who want to have a cashe of unallocated sp, that number could be adjusted (similar to how we change our default orbit distance in game) though the default would be zero, as to not confuse new players. 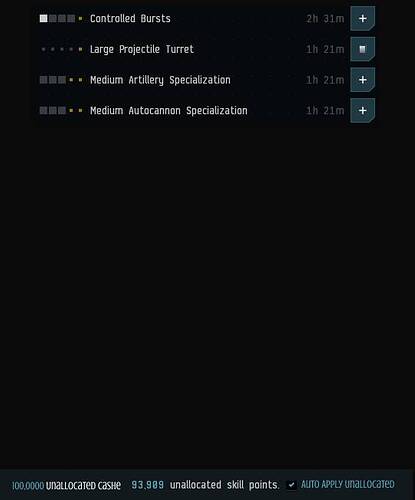 Once the threshold is met, and the “auto apply” is selected, it would look like the current training que…

Why add a convoluted mess by creating new skills?

I watched the Fanfest live when this got mentioned…

They are going to eliminate Attributes completely, revamp any implants that deal ‘learning’ bonus for said attributes, then they said they are going to give us a simple FLAT rate of SP earning per minute/day that they think is the average we deserve.

The key focus the Dev talking was on about was about attributes and remaps and how this would completely fix the confusion of using those 2 things when it comes to skill training.