Some thoughts on Photon

I spent several hours tinkering with Photon. Overall, I like it a lot, there’s lots of really subtle, smart things that are being done that I appreciate, I missed parts of photon the instant I went back to TQ. There’s still a lot of room for improvement though and I’d like to focus mostly on those areas for this post. I’m not the greatest at posts like this, but I really wanted to offer some feedback. So, let’s dive in:

On a 27” 1080p monitor the first launch looked pretty rough at default settings. Messing with UI scale and font size got things into a really comfortable feeling place. The UI felt much happier with things at a smaller size. Once I got that stuff sorted out in a way that I liked, I kept those settings constant and started investigating.

Window size flexibility
The way that some of the windows can be rescaled is incredible, and really should be brought into more of the windows of the game (more on that later). The best part is that it’s all just click & drag-able.

Here’s some different arrangements of chat windows I was able to do: 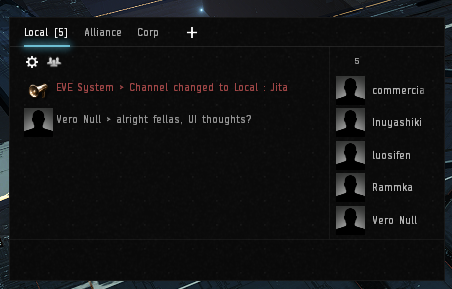 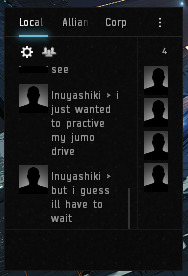 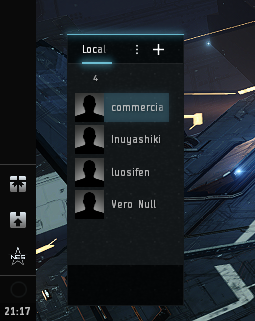 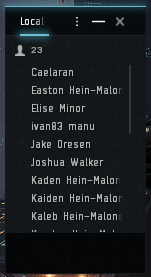 How great is that?

And then I found the scaling limits for the “Show Info” window. Wonderful. As someone who sucks at remembering resist profiles, I could see myself keeping this up on my UI permanently in this form factor. The more stuff that can be squished down like this, the better. I hope Photon takes every opportunity to incorporate this much flexibility wherever possible. 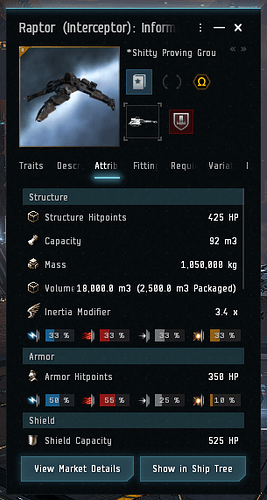 I really like how much softer the interface feels. Without all these boxy frames, tabs, buttons, etc… everything looks much much cleaner. I think in some places it goes a little too far. 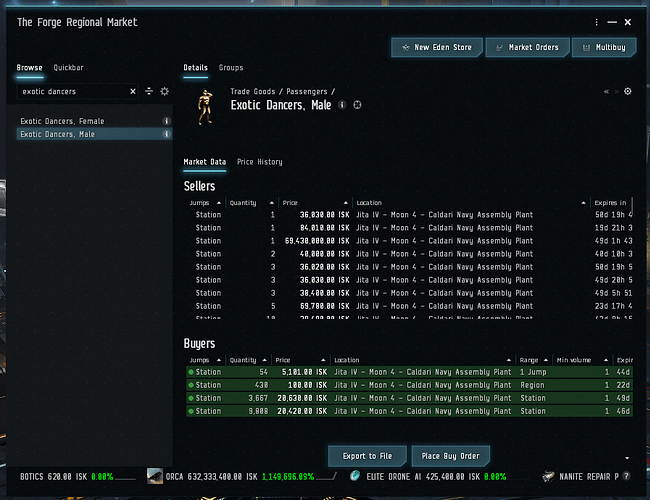 I think in places like the above image, the sellers and buyers feels too floaty. I think they need some framing designed in like this mockup image below: 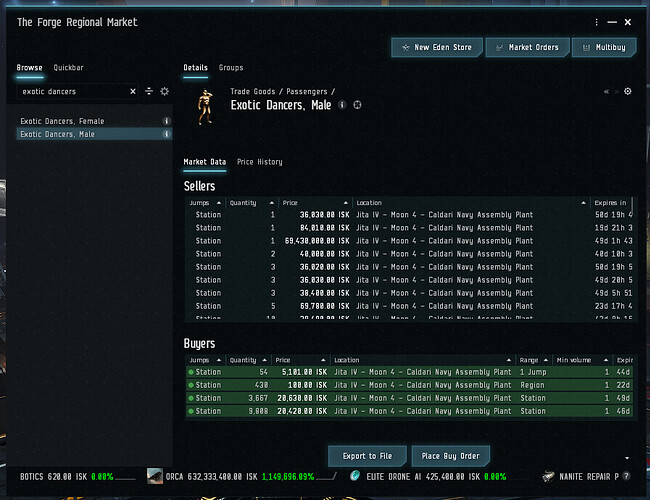 Other places where I feel like this treatment would be beneficial: Dscan list, wallet transactions, solar system info. For the Dscan list in particular, I was repeatedly reading the column labels as though they were the first row of scan results.

The right click menu was also noticeably different. I’m not a huge fan of the icons that have been added. They push the left margin really far out and makes type readability feel a little weird for a second. When I right click, the first thing I see is that icon and my brain starts looking for more icons before it starts reading the text. I think you could kick the icons and use the illuminated markers similar to how they’re used in other places, or alternatively, add more icons so there’s more visual identifiers to use to find what you want quickly and that margin space doesn’t feel wasted. Here’s some mockups of alternatives that I think might be worth considering.

Not so great stuff:

I think there’s a small handful of stuff that needs to be revisited or completely cut.

Speaking of scale, I think the size of the text field feels a bit tall, all that space below the baseline feels weird:

Next is the bookmarks window. It’s a super important window that almost every eve player has dedicated screenspace for. It should be just as flexible to resizing as the chat and show info windows. Right now, those big buttons make it completely unusable at its smallest possible size: 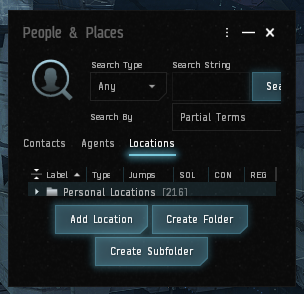 I think those buttons could easily be represented by icons. Maybe create a compact mode that does that, and scales down the (enormous) magnifying glass icon in the top left?

The thing I need to talk about most is the dot matrix and background static in active windows. The dot matrix, background noise/static/snow effect looks REALLY bad on my monitors. Maybe it’s my color balance or something, but it actually caused eye strain for me and I have a hard time keeping my eyes from losing focus because of it. It makes things look blurry like I’m watching a low quality livestream. Just cut that entirely, or make it optional or something. The dots look cool, maybe pepper that in around in very small parts of the UI to add a little character to something, but really, it’s not necessary and really detracts from things imo. I’m personally begging, please address this, it’ll affect my ability to play the game. Here’s a photo of what it looks like on my monitor: 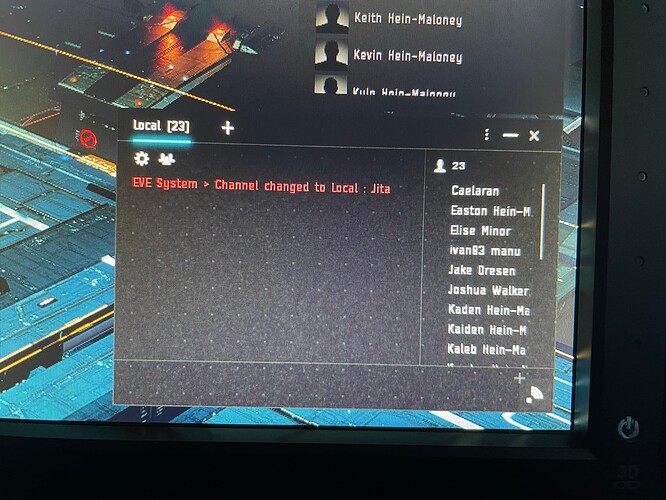 In some windows, the outside margins feel really big: 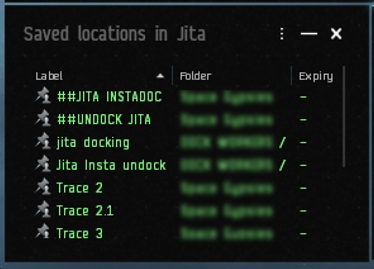 Ok, so that’s all I’ve got for now. I’ll probably do a bunch of edits after I submit this post, but I didn’t want to wait any longer to put things together and was hoping to get it done before the weekend (I delayed posting this and you guys already fixed all the stuff in the wallet that I mocked up proposed solutions for). Happy to expand on any other points further. Apologies for any unclear language. I’ll wrap things up with a picture of my UI by the time I was done tinkering, which I was really pretty happy with. Thanks for reading, keep up the good work, folks. 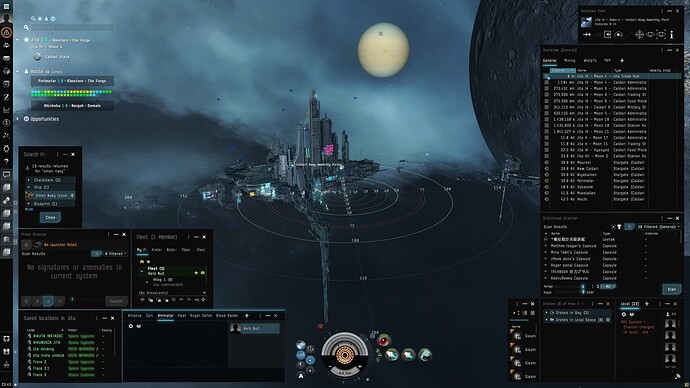 What is this photon thing?

Thanks for letting us know your thoughts about the Photon interface. It does look a lot cleaner and more organic but yeah, some of those icons and buttons are really too big.

It’s like Android Automotive material design, except in spaceships.

In fact Eve is basically simulating a desktop environment, with a space background.

All we need now is a button at the bottom of the Neocom to toggle windows visible / windows hidden empty space desktop mode like our OS environment.

Thank you very much for the detailed write-up Vero Null. I’m happy to hear that you like the direction we’re going with Photon UI and you’ve brought up many good points and suggestions for improvement that we’ll take into consideration.

It’s also good to see that some of the topics we’ve been discussing internally are mirrored in your feedback as well. For example, just before the weekend we were discussing the background noise and how we hadn’t taken a good look at it again since it was introduced very early on in the project, so your feedback is pertinent for that discussion.

Out of curiosity, what settings did you end up with in terms of font size and UI scale?

Thanks for taking the time to read my post. I settled on %90 UI scale, and small fonts.

I see this new design in UI as copy of Windows 10 design, image:

Except the line is blue instead of gray

You should also fix these big fonts issue currently on TQ.

Fitting window, everything overlaps and difficult to use. Chat and cargo windows too chunky and I don’t like that expanding scroll bar as it covers the info icon and is very irritating. The info windows on ships and items doesn’t fit all of the info tabs in small size but I have to expand it by 50%, too big and chunky. Some things are ok but more cons than pros for me so I went back to original.

I agree on the expanding scroll bar. I like the idea but currently its really annoying. The way the 14.3 AU fits into the D-scan distance is another pet hate. Generally though I like it, and use it.

is the ship detail off with the new UI? Seems off? Graphics look a little dull also… not sure.

Directional scanner has default settings where digit is not quite visible in “Range” input field . This is case when “4” matters, i think 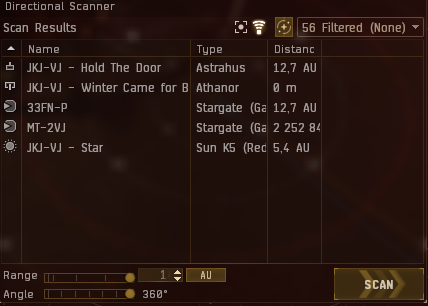