Its horrible! What made you guys think this needed to be fixed? Crap contrast, clumsy buttons, BAD IDEA! Please work on the things that need to be fixed and stop fkn with things that work correctly.

Not impressed with the removal of the “Interval” / FPS settings. I have a laptop, not meant to force 60fps constantly. Enjoyed the 30fps just fine. In this update to the UI, the setting is nonexistent. Return it. 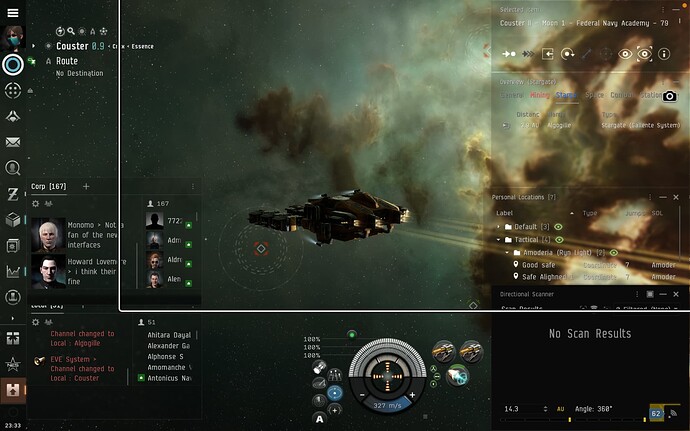 Legally blind capsuleer, reporting. My vision is such that I cannot see low contrast items or very small text.

Naturally EVE is already a challenge to play lol. The windows (dscan, overview, etc) are extremely transparent. The icons got smaller. And did the text get smaller? I can’t tell.

The screenshot attached shows the zoom feature I use on my MacBook Air. I was hoping, with a new UI, that the HUD would get easier to read. I’m sadly disappointed. Transparency in settings doesn’t help at all

The “new PHOTON UI” is TERRIBLE! Ironically, though everything became bigger and taking up screen real estate, the station icons were WAY TOO SMALL. I searched all options but couldn’t find a solution - except to TURN OFF PHOTON UI and restart my client.

Please leave this as a turn off-able option.

Region market tab does not update when entering new region.
System security color not bold as before.

I liked the new UI a lot, is much faster and easier to read.

1.) Planetary Industry window, showing the list of planets with command centers does not have a Close button in the upper right corner. The close function is buried in the three-vertical-dots menu.

Fix: make the horizontal border between these two lists clear: at all times show the line which appears on mouse hover. Also consider adding vertical arrows, like " VV " above the break line, to hint that the item hanger has more containers in it than can be displayed at one time.

CCP: “But, you have a scroll bar to tell you there’s more to see.”

Response: Photon UI has minimalistic scroll bars, which are only 1/3 thickness until mouseover. It’s possible some players at first glance might think that the “vertical line” (scroll bar handle) is some kind of new way to show the break between the item hanger list and the window showing items in the selected hanger.

and easier to read.

How is it easier to read? Shadows behind text make the text appear blurry, text input boxes are almost indistinguishable from the background, the UI lacks visible separators between expandable headers/columns, icons are less crisp and text cuts off in many places despite there being enough space to display the full text, buttons are sometimes buttons, sometimes just random icons that don’t look like buttons, button text is in lower case font instead of easier to read upper case font for important things like Undock, the accept button in the DLC window is now much smaller and harder to read. That’s just a few things where Photon is not easier to read and use.

Where is it easier to read then?

The shadows behind the text is actually what made me read everything.

Since 2008 I struggle reading text in EVE, now I can read everything.
The truth is that nobody’s optimal experience is the same, our eyes and brains are a little bit different.

I am truly in love for the new UI, I friend of mine yesterday was liking it a lot too.
To me the new UI is fantastic and I would enforce it on the players.

To me the new UI is fantastic and I would enforce it on the players.

Then thank you for making my experience much worse. My brain refuses to see blurry text as clearer, crisper, easier to read.

Mabye, instead of relying on Photon, you should have tried one of the color-blind modes to see if they help with your impairment.

Hello CCP
i am gaming here since 09/2017, 5 years of me live spend. While the first 3 years where lot of learning and fun the last 2 years reduced this a lot. Reduced from 7 to 3 accounts, on the closed 4 accounts chars have been biomassed or transfered to the other 3 accounts still subscribed. And I do not know if I will continue the subs.
Yesterdays patch even more alienated me from game than every other before with those photon UI and the hidden message making this disgusting oversized ■■■■ mandatory.

Old and new “target box”; photon is oversizes, missing text, buttons are far to small and hard to click by mouse (I do not use shortcuts … why should I ) 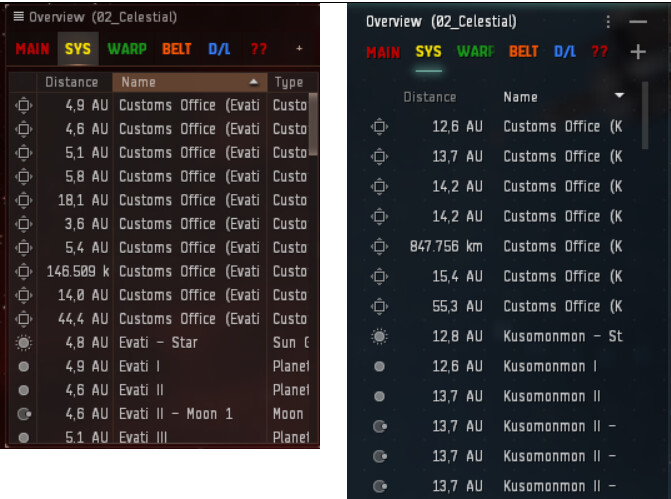 Photon overview is far to much spacing, padding, shows even less information (warp points) on larger scale, WHY?

Again : overizsed, in photon more space is required, less space on what is left of the screen … this is a COMPUTER GAME … not some mobile ■■■■ younglings play. 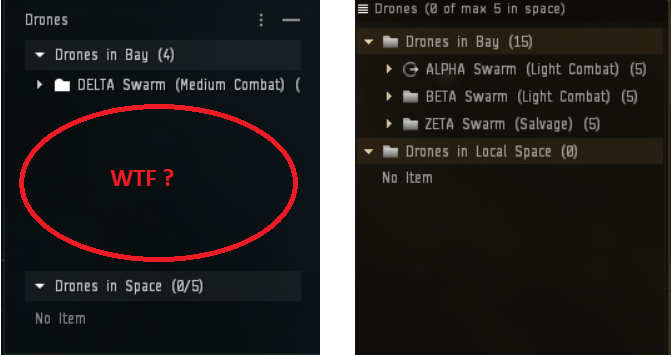 At the drone window … what with this messed-up space here? Why is it not sorted , lined, done like in the present GUI? Did you not only change the stylesheets behind but also the coding?

The “good” old GUI : everything sorted, drone wings above, launched drones below, all 5 launched drones visible
The “bad” new GUI: only 3 of 4 drones here visible in the SAME SIZED window

As far as I know I’m not empaired at all.
I used to see all the text as blurry and now I can read everything, my friend is telling me the same.
I have other friends who along the years barely couldn’t read EVE text too, I will ask them later if they are reading well with the new UI.

The problem about launching a new UI is that the people who didn’t like it are way more voiceful and the people who like it just plays along and don’t come to the forum.

Agreed on all those, the Photon UI has a lot more padding and it’s not perfectly adjusting sometimes, but those stuff are minor issues and for sure will be fixed.

but those stuff are minor issues and for sure will be fixed.

Those issues have been around since the inception of Photon. I would not hold my breath that CCP will ever fix these or any other issues.

As far as I know I’m not empaired at all.

minor issues and for sure will be fixed.

lol
they will never fix it.

All, everything, I couldn’t read easily anything at all.

The text in the old UI is just too small and it almost merges to the background, on the new UI the letters are popping out of the background and I can read it all easily and faster.