The text in the old UI is just too small and

it almost merges to the background

That is what Photon does. The old UI has clear and distinct borders, input fields and column seperators. All of that is gone with Photon.

Yes, I scaled it since always, only now I can easily read stuff in EVE, love the text shadow.

Also the new UI is much lighter, it’s not stuttering on every window, I love this UI!
The Fitting window is much faster too.

Then show an example. “Everything” is not an example. Pick some UI element that is now easier to read and post a picture of this UI element in Photon and the old UI here.

Everything, all texts, everything and everything!

I already gave my feedback, I love the new UI, it’s faster and better for reading, the old UI has to burn and disapear, any issues with the Photon UI has to be fixed.

Now I will mute you, ok? I just don’t have patience for clingy people.

Fair enough. Mute me. You clearly can’t prove your point that it’s better. Whenever someone posts constructive criticism, people always expect proof of the criticism, but someone claiming an improvement doesn’t need to adhere to the same standards. That calls your claims into question, so much so that they can be safely ignored as trolling.

The Fleet Finder is missing when I am in a fleet.

The icons in the inventory window when in space take up too much room. Remove them and give me back the storage bar.

Also. the scroll bars need to be easier to see when not active. They are just too light of a color making it hard to see at a glance where you are in the window.

2004 Pilot here.
I know the forums are a place where there are plenty of complaints and arguments non-stop (seen it for over a decade now).

However, I simply wanted to add that I very much appreciate the new Photon UI. I am in much agreement with Arya regarding the upgrade. I have had much better response time in the Industry/R&D tab. Much better load time in hanger/cargo bays. The UI is much more streamlined, and overall, EVE’s UI has needed a overall for a LONG LONG time. I don’t think you should enforce it across the board for all players, and leave a option to disable it if needed, but so far, very happy with the changes.
And yes, I realize there are some bugs in it, such as the drone issue, etc.

After 3 days using it ,i can say that it is defiantly not for my eyes also had a headache .Thx ccp for giving us the opportunity to switch it off

The missing drone controls like focus & aggressive/passive currently makes photonUI not workable longterm, so that should be a priority if you want people to test more.

Generally why is photon so incrediby bulky? It seems even worse at wasting space with MASSIVE empty areas for most windows? Condense condense CONDENSE!

Why does a compact window have no close button instead needing multiple precise clicks to close? (truly awful when you need a window go away during combat) Why do compact windows remove crucial functionality, like loot all for 1 example.

Why is ‘loot all’ functionality so incredibly awkward to access? I understand not having a keypress but it’s so annoying to access the click. It used to be possible to get an extra window to pop near your overview, but photon appears to preclude that. Why isn’t there a loot all button at the overview?

You do all this work on the nice EVE graphics, but no1 ever gets to see them because of the interface constantly needing 7 windows to show what should fit in 1 window. As it is you get to see about a 5cm square of space once in a while because the interface is so wasteful. Photon should be your opportunity to show EVE’s flight (even hangar) graphics finally, not a step backwards that make them even less obtainable. Photon should be about condensing 90% of the in flight crucial information so you get to actually see some of the EVE graphics one day. 90% of the agency window is still wasted space for 1 missed opportunity, but so many things actually got worse & became more bulky like the wallet, half as much info in twice as much space.

Here’s the brief you should have been given:
Don’t even consider it a new UI until you can get all of the following flight information in to 1 quarter of the screen, no more, with proper top to bottom of screen lists. →

Start over, be ruthless, cut everything especially all borders & waste, use icon+count number liberally & CONDENSE!!!

As it stands, your interface guy has nullified years of work of your entire graphics team/s.

The Neocom keeps getting blanked out for me. When I logged in after the Photo UI was made the default, my Neocom was empty and I could not drag buttons to it. I used the reset option and got the default buttons, then re-added the buttons I use. Then, two logins later, it was broken again. Same routine.

I am somewhat indifferent to the style change… it is better in some ways, worse in others… but if it keeps breaking on me it isn’t of much value.

Too glowy, too distracting, and far too much whitespace.

Any one know how to make the necom darker?

I’d also love to know what’s up with neocom transparency. It seems to ignore the general transparency setting (I have transparency set to 0) and the upper menu items are very hard to read when you have things open in the info panel. Is there a separate setting for it buried somewhere?

The docking audio and the hangar interior sounds are extremely annoying and we need an option to turn them off specifically (without breaking other audio settings by turning some slider down).

btw. what’s with the obsession with lots of empty space in the new UI? 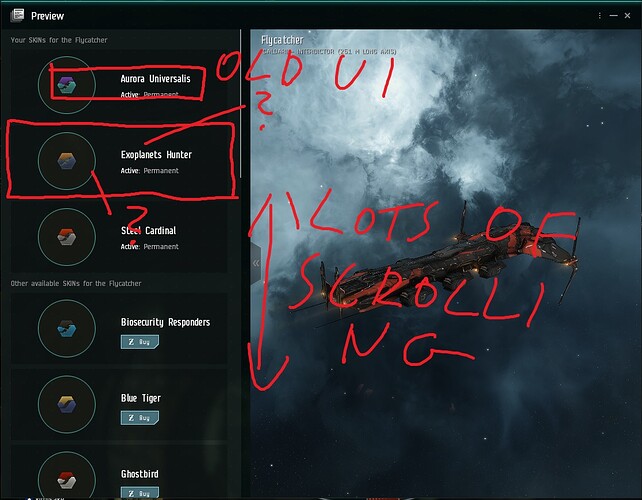 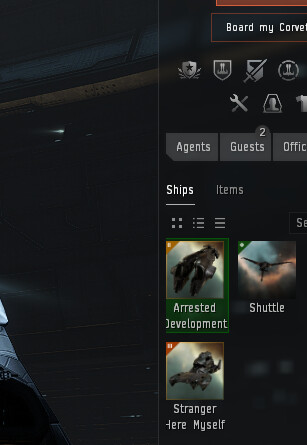 Omg! I thought this new UI was obligatory! Yesterday a corp mate showed me how to turn it off and I was SO happy! Suddenly everything was CLEAR again, clearly visible, easy to find and click. Please never make Photon obligatory

sorry but I can’t say anything positive about it.

The new Photon UI is great. Finally something new that need to be optimized.
Also, the hangar interior sounds great.

But why there is no background music when mining?
FPS limiter would be also nice.