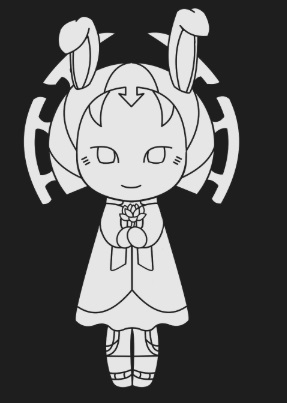 “The resources, influence and ounce of relevancy I have today was not given to me by some army or nation. It was given to me by just one singular Capsuleer… A Capsuleer that at first glance nobody would see much in, he was no different than the rest. An unpassionate, uninspired and frankly poorly skilled individual with no purpose that wields immense power but does nothing meaningful with it… I helped him, I pointed him the direction of opportunity and enabled him to seize it with both hands. I do not see him as my pawn or puppet. In fact, I feel indebted to him. With his help I’ve done what I’ve always wanted to do and give back to the people that protected and raised me. I wouldn’t be where I am today without him, there’s nobody else in this world I need more than him… And to my surprise, the feeling is mutual.”

"Well what it looks like when it’s been compressed by industrial-grade crushers and made into a nice mineral rich cube. That’s about a hundred rocks of Mercoxit combined to be one item that can be easily stored or processed.

“And what exactly exactly is this ore used for Avio?”

“Well Suha, this stuff here is the sole supplier of Morphite in New Eden…With the exception of some ‘mutated’ ore the Triglavian invasions are creating with their emerging conduits… Even then, that stuff is nowhere near as rich and constant as Mercoxit is. Can’t get anything else out of the rocks, but this stuff here? Is the secret ingredient to some serious technology.”

"Morphite isn’t ever used in traditional manufacturing of ships or modules, nor should it given how rare the mineral is. It’s instead used as a ‘stepping stone’ to a new level of technology - a second tier if you will. So ships like Stealth Bombers, or Heavy Assault Cruisers - all made with morphite in it’s recipe. It’s the key to technological evolution in New Eden.

“Marvelous! These must fetch a high price on the markets then!”

Just about…Every cube you see in this storage is worth about four…Maybe five million ISK? Depends on the grade of ore."

“Yet those are Jita prices…No?”

“Well…Yeah. funny enough? You can only ever find this stuff reliably for sale in Jita. I was kinda surprised by the size of the market, not many buy orders with not that many units. I was expecting it to be far larger than i found it to be.”

“Why not sell them in 6NJ? Could be beneficial to Industrialists in the area if they can purchase the material locally. Could either sell the cubes or melt it all down yourself and sell the mineral directly.”

“Here’s the thing - These cubes are ideal for how compact they are. These are incredibly easy to move from point A to point B. Way less bulky than a pile of rocks or mineral, easier to transport to their factories this way.”

"Question is, would any Capsuleer in this area THINK to check the market for compressed mercoxit before they’d look for morphite?

“Come to think of it, it’s a pretty light material. When it’s compressed it’s just becomes far more easier to store in a cargo bay. And this ore comes in three different ‘variants’ or ‘grades’. Starting with it’s neutral and natural form, then to ‘Magma’ and then ‘Virtuous’. Mercoxit as an ore is split up into three different goods - melting it down into morphite would make it a singular product to put on the market.”

“And nobody else is selling this stuff in Venal?”

“Not that I’ve seen…There was a token order here or there, but the prices for them weren’t serious - Way under the galactic average and only a handful of units. Probably not even enough to build one ship with. Morphite is non-existent on the markets out here.”

“That’s why I dug it up…Was never much of a miner in my career as a Capsuleer, thought I was too good for it I guess.”

“You’re not wrong! the asteroid belts out in this region glitter brighter than any asteroid belt I’ve seen back in High-security space… Almost makes mining fun.”

“Good! I’m happy you’re enjoying yourself while you try something new. Even more happy that you’re out there reaping what nature has to offer.”

“It’s…Different. Part of me feels a little weird about enjoying it as much as I do.”

“Oh please, there’s no need to apologize to me. While I can’t speak for all Guritsa, I can at least forgive you… I know you’re trying to do better and make amends for the damage you caused in the past, and I appreciate that! Not many Capsuleers would ever feel guilt for slaughtering Gurista wholesale on behalf of the State…”

“I came to this region a brute…Just some knucklehead that was interested in fighting and killing. I don’t shun that part of me, but now there’s far more to me than I ever thought there would be… This region has taught me new things, new skills and news ways to turn a profit that’s entirely dependent on blowing ships up. And while that’s still fun and all…Now I can build ships, now I can trade and work a market, and now I have the smarts to get out there and gather raw material. I’m more than just some mercenary now I’m… Something new… something better. I’ve never understood myself this well until you brought me out here and gave me a purpose, something to work towards… I think I’ve found my true self finally.”

“I…I don’t know what to say. I’m very moved at you saying all this Avio. I’m… I’m thrilled! Thrilled that you’ve found yourself out here! That you’ve become something more than you were!”

“In a weird way, it feels like the ‘old me’ is saying that I’ve gone astray and abandoned who I am.”

“Well ■■■■ the ‘old’ you! Old you is dead and gone! In his place is you Avio! A shining example of what I want people to be like! Their superior form in mind and spirit!”

“Maybe not, yet I’m sure with time you’ll be seen as one of them. You’ve certainly put in the work and made some exceptional progress. I couldn’t had picked anyone better to help make a difference out here… so I guess I also have you to thank.”

“Guess that makes us even then…Now anyway, what do you think we should do with all this?”

“Yes! Like you said… You can build things now. If this morphite is the key to crafting advanced technology - then why not use it ourselves? The Guristas value cutting edge technology, why not make and sell advanced ships and modules now that we have one of the secert ingredients to make it happen?”

“An idea certainly… Just no idea where to start, the process of making ‘Tech two’ grade equipment is far more complicated than producing standard issue modules and ships like I’ve been putting out requires research…I don’t even know where to begin!”

“Begin where you started with the easy stuff… Why not frigates?”

“Why not mining frigates?..Yeah, yeah maybe that could work. I love my Endurance, used it to dig up all this Mercoxit, and I know prospects got value out in these parts with rare gas clouds to be found in Tenal and Vale of the silent. Not to mention that the Prospect also has more… ‘Combative’ functionality. These things can fit a covert cyno and some serious firepower on some unexpecting ships.”

“Sounds like you know where to start after all! You got this…”

“Heh, guess I do after all… Though I think I’ll also sell a good portion of the Morphite on the market. I don’t need all of this for myself, and if I do - I’ll just buy from my own order.”

“And in the worst case scenario, you’ll just mind some more! I’ll leave you to it Avio, be careful out there.”

“…You wanna get dinner later? About… Fifty new restaurants opened on the Rabbit’s Warren. One of them gots to be good…”