Speculations on what's to come

Sharing with the IGS some speculations I’ve made for publicity and for briefings today. No time for a proper post or edits. Sorry about that.

On what’s to come:

I guess the major question here is is this a beginning of a peace or an escalation of a war.

The triglavians stopped their attacks at 27 liminalities and have not made further advances for about two weeks now. They are doing something in the final liminality systems. EDENCOM has at least publicly concentrated on evacuations, rather than a counterattack; and now they have warned that they might cut off the 27 systems in question.

That could speak of a standoff, a peace of sorts, or at least a cold war instead of a hot one.

On the other hand, we don’t know anything about what the triglavians are doing exactly, why they need that space, and what exactly is CONCORD doing poking around in the Abyss. So that might speak of an escalation coming.

Capsuleer forces entering triglavian systems are an additional wild card there - and from what I have heard it won’t be just protrig triglavians, there’s a lot of parties among indie capsuleers willing to profiteer from a new frontier.

There have been tinfoil theories about triglavians shutting down the liminal systems, or completely destroying them, or moving them to the abyss, or various other theories. On the gate network observations now:

Since then we have found out that all gates in New Eden have been disturbed by the liminalities. If you look at any gate in New Eden, it has a kind of a “pulse”, a red light that dims and lights up. The pulse has been becoming more and more rapid; it was 15s frequency when it was first confirmed for good and has gone down by 3s a day since then - it’s now at 3s since midnight. It’s the same pulse that liminal stars exhibit and we now think it’s actually been going on for a much longer time but no one properly connected the dots.

The scientist on SCOPE said that there is a severe disruption of the whole gate network probably caused by how the liminal systems affect wormholes and whatnot - gates are a kind of a wormhole held by jump gates, and, oof, I’m not a spatiotemporal phenomemon expert so don’t look at me for more.

They also said that if uncontrolled it will lead to a potentially catastrophic malfunction of the whole gate network.

We now expect that CONCORD might cut off the gates to liminal systems to prevent that and to quarantine the triglavian menace.

What I personally expect to happen is these gate flickers, that is, them turning off and on, will worsen until they will be forced to do just that.

The “gate flickers” - them going offline and rebooting - at the moment seem to last about 15-20 minutes.

Well then, I guess you don’t like those possibilities. Carry on within your own bubble.

At least one gate offline now for 30 minutes, which seems abnormal for boot. 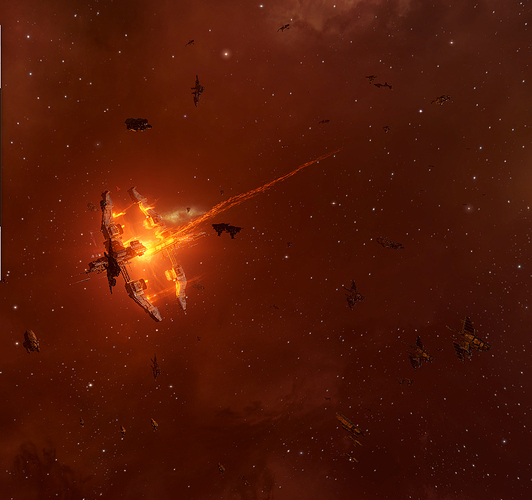 I think a second round of fighting is coming. However, I think the Empires are going to take the first shot this time, as they’re staging on the in gates to major liminality systems now.

Without data, I’m afraid I won’t be able to do much more than theories, but since it seem to be the idea of this thread, let’s speculate.

and sorry for the “draft” effect of this note, but my teams and I are trying to gather as much data as we can, it’s not everyday that the gate network see this kind of activity.

And that’s not a theory, it’s facts. warp speed of ship changed at the same time that the invasion changed; smaller ships started to not have enough mass to trigger a cyno beacon; etc etc.

Now, to dive into theories:
we could see a change in stargates connections, even if graviton streams can support small deviations (thanks the spirits, otherwise the gate network would have been long gone), it can’t, mechanically support too much distortion.

If you wish a metaphor, imagine the graviton beam being a current in the ocean, a ship can simply “follow the current” and be carried by it.
but add a reef in the middle of it, and your ship will sink, even if the current itself still exist (aka unstable wormholes).

It’s therefore very possible that some connections will not exist in the futur.

My guess is that the outer ring would be the most affected, you see, gravitational waves go through wormholes, much like any other energy, it mean that empire space where there is much more open WH connection, the gravitational background of the cluster is more stable there than in null sec.

On an other level, IF my theory about the Mass Energy Ratio of the cluster is correct, then, altering it could lead to drastic molecular changes on unprotected areas in spaces.
Basically: everything with an electromagnetic shield lesser than a capital ship.

fun time’s over
back to the lab o7

If you have ANY data, footage, informations, etc on what happen with the gates (not theory but actual data) I will pay a good price for it !

Any sort of peaceful resolution with invaders I find dishonorable. As a Caldari Officer I publically disapprove any defeationist tendencies or freezing of captured territories instead of fighting to take them back. If the State will give us order to fight triglavians despite Edencom decisions, then it will be so. While we are at war with Gallente, Minmatar, Triglavians, we shall treat them as enemies and destroy them on contact for invading into State territory. We shall clean our space from foreign invaders, whomever they will be. If Edencom can’t do its job, we will.

Glory to the State!

The Megacorps are the ones who called the retreat from invaded State territories, not EDENCOM.

Here’s what I think’s going to happen:

The 27 Liminal systems are going to drop off the network. The gates in from known space will simply shut down, the gates inside either self destructing, going dark to stand as monuments, or redirected to other Liminal systems to form three interconnected constellations of 9 systems each. The only access to those systems from known space will then be either a lucky filament jump or wormhole connections.

I know we’re only 5 hours from knowing for certain at this point, so… we’ll see. I’m excited. New Eden is getting a long-awaited systemic shakeup the scale of which hasn’t been seen since the Dronelands opened for business.

nope, Google does not agree with you.

The end of the Triglavian invasion is fast approaching and EDENCOM has urged “all Capsuleers who currently live in systems conquered by Triglavian forces to relocate and find a new home immediately.” It is unclear what will happen to the...

43 more results, using the keywords “triglavian evacuation”, all state specifically that it was EDENCOM who put out the evacuation notices.

In the most recent Scope, it specifically brings mention of the megacorps sounding an official retreat, instead of continuing to fight.

This line specifically. Edencom put out an evacuation notice yes, but the megacorps are the ones retreating from the territories in The State after having made concerted efforts to encourage the citizenry previously to fight

43 more results, using the keywords “triglavian evacuation”, all state specifically that it was EDENCOM who put out the evacuation notices.

Yes, and it was the Megacorps who decided to not heed those notices but to leave.

Hey, could you maybe not defecate all over the multinational coalition who did what we could despite the Caldari Navy turbofeeding itself to the enemy? I guilt trip myself enough, I don’t need you guilt tripping me under false preconceptions, to say nothing of the men and women who did even more than I could.

A peaceful solution after 27 dead stars is definitely less than ideal, but it is what it is. Welcome to the new status quo. It burns me up too, especially the thought that they may actually be right about the Drifter threat and we may have to work together on that. But denying the truth in front of you will get you killed, and others around you.

Acknowledge your weaknesses and overcome them. As individuals and as Empires.

could you maybe not defecate all over

Language, kid.
Where are you even from? Some sort of Federation?
Because I doubt any other Empire lacks self-respect to such degree to graduate such a primitive rude ignorant.

Could you please crawl back to where people like you crawl out from and cease poisoning public media.

P.S.
Oh, whoops. Looks like I am mistaken a bit. The guy was from the Republic, but I guess it says volumes as well.

If you, dear minmatars, won’t stop that sort of population from leaking out of your borders, we’ll have to plumb your orifices with heavy firepower.

REPUBLICANS! You weren’t taught in Floseswin enough? You want us to send a punitive expedition to your space as well? But we aren’t Amarr. We won’t give you mercy of slavery.

Then stop giving out flying licenses to trash.

And here I thought I was rather polite given the circumstances. Now the gloves are off.

Your moronic refusal to recognize facts, and all those who share it, are what led your State to needlessly sacrifice so many of its people in counterproductive tactics. You wanna start flinging insults instead of doing something actually useful.

Where were you when Ichoriya fell? Or any number of other fallen Caldari systems? At least your dead CalNav buddies showed up.

Is it a typical minmatar trait to attribute their own faults to others? Because that’s what you’re obviously doing.

You wanna start flinging insults instead of doing something actually useful.

You’ve opened your minmatar mouth without even checking first what exactly I am doing and where. What a pitiful sight you are!

Where were you when Ichoriya fell?

Guess?
In the Ichoriya. Fighting.
But little you ignorant knew, you guys just bark without thinking and checking facts first - I’ve seen that many times before, it’s only one more drop in the statistics of that dishonor. That’s why I don’t think that any sort of negotiations with your kind will be fruitful. You’re just loud useless nuisances.

Then why don’t I recognize you? I’ve met many pilots in my time with EDI, all of them memorable to some degree. The only thing I recall you doing is blowing hot air. I was there at Ichoriya.

But sure, go on to ‘glory.’ Get yourself and your comrades killed over and over, doing the exact same thing. Run from the responsibility to do better.

The ironic thing is that my original reply was meant to be an encouragement, besides asking you not to ■■■■ on EDI. Shame you missed that.

Then why don’t I recognize you? I’ve met many pilots in my time with EDI, all of them memorable to some degree. The only thing I recall you doing is blowing hot air. I was there at Ichoriya.

Well, if you wouldn’t be blowing out hot air yourself and blaming others in that instead, if you would see and notice things around you and think at least a little bit before opening your mouth, you’d notice what I am doing and where.

Until that time - dismissed.