If this fight was somewhat real, all people should have died way earlier, including the main characters. Arya wouldn’t have flown in the air across hundreds of white walkers right on top of the Night King ( what a stupid death). We never understood who was he, why was he immune to fire, what was his goal (apart from that short Bran explanation in episode 2).

Only one giant shown for a brief moment. They promised us huge fight, yet all we saw was dark night with a fog and some distant battles. They tried to compare the fight to the “Return of the King” one. Yeah, not even close.

All in all, a very unsatisfiying flow of events in the third episode. I hope the next battle vs. the Golden Company will somewhat compensate.

People around here is complaining about massive “color blocking” and “chopping” and other nasty compression artifacts during the battle scenes… did that happen elsewhere or was a premium from HBO Spain?

I also don’t work there and they never paid me for it that I know of (yet).

You’d be surprised to see that I sometimes make databases of stuff I don’t like, and so, I could start to watch it even though it would be because I don’t like it, because sometimes I can’t always do what I like to do.

BTW, on the subject of obsydian weapons, other than the fact that obsydian is a terrible choice for weapons, if the lethality of obsydian is by contact with the wights, then the easier solution was to forget about regular weapons and make weapons like those used in the pacific with shark tooth.

Obsydian is useless against any kind of armor and can’t be forged in any way; it cuts by being broken in such way that sharp edges are exposed (albeit those edges won’t remain sharp for long), then being broken again to expose a new cutting edge -much like stone weapons work.

How to kill many wights by piercing their flesh with obsydian?

With weapons based on this: 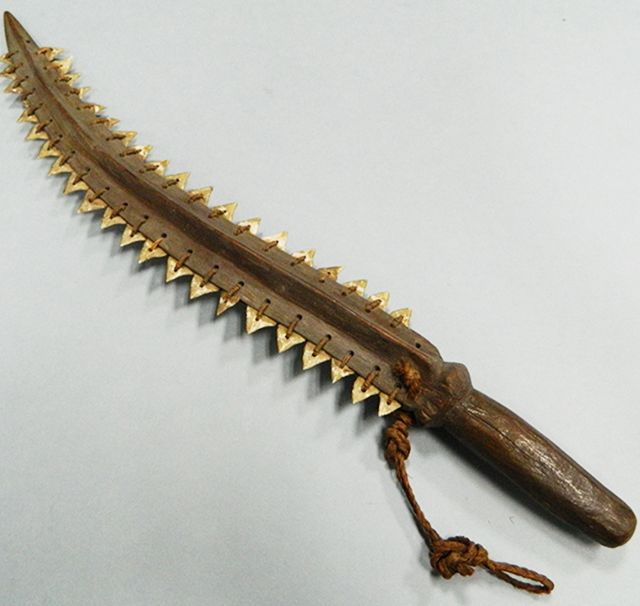 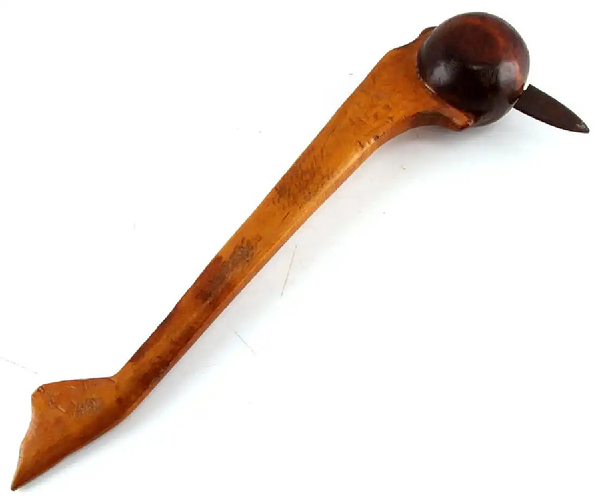 Place obsydian as cutting edge and presto. With many tiny “arrowheads” in a sword, any of them piercing the flesh and bone of a wight will be lethal. Also if some lose their sharpness, the rest still can cut and pierce. And as for the skull crusher, well, it’s obvious. Unless they’re wearing a helmet or armor, that’s a very effective way to drive obsydian into a wight. No fancy cutting and slashing and spearing -just hit them anywere with the obsydian sheet and done.

Yes, I tend to think about the weirdest stuff, specially when I am bored.

it’s a tv show with limited screen time, They could spend longer and do everything “tactically” but end of the episode things are going to end the same either way.

Also the WWs are magical beings they don’t give a ■■■■ about your tactics, if we really want to talk tactics they blew it even worse. 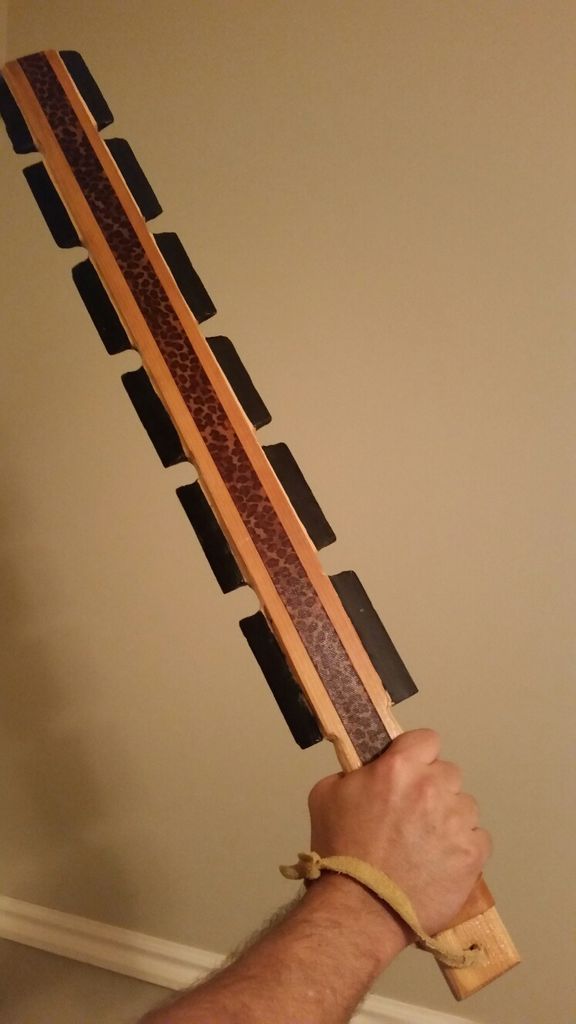 Yeah, the visuals were dark here in the U.S., on HBO on Amazon Prime. And Amazon’s supposed to have more streaming bandwidth than other providers. The cinematographer said it was shot with standards for viewing in a cinema, and we didn’t have our TVs’ or monitors’ setting right. But… it is a TV show that people view on TVs and monitors, right?

If that was supposed to be a movie or something, then yes, but it was one episode in a 8 season TV series.

For a TV episode it was pretty epic.

Yes tacticaly it was a horrible fight and a great example of how to fail miserably.You can clearly see dozens of arrows shot at the ground near huge swarms of wights especialy where the wights start puting out the trench fire.
Too many convenient scenes where characters get knocked down and covered up by wights only to be saved and unscathed when we seen generic soldiers get bit and torn apart by wights in 2 seconds in similar cases.
Artilery was next to useless when they could’ve shot those suckers for many minutes before wights came near along with an archer line which could then retreat behind the castle walls.
Fight inside the courtyard was stupid as all hell there were piles of dead 6 feet high covering the barricades yet no wights climbed them instead conveniently went through remarkably corpse clean chokepoints.
The dragon drive bys were acceptable tho.
Winterfell is a dumb shaped castle with no moat and all too easy to breach(even an empty moat is better than no moat).
Overall no scouting too little projectile spam bad castle design bad use of manpower.I’m pretty sure they wanted to be able to say 'we did the bigest battle in television history thus far" but for me it had too many flaws in how youd do a battle logicaly to accept it.

Ah, nice find! Obsidian weapons were a thing after all!

Yeah, the visuals were dark here in the U.S., on HBO on Amazon Prime. And Amazon’s supposed to have more streaming bandwidth than other providers. The cinematographer said it was shot with standards for viewing in a cinema, and we didn’t have our TVs’ or monitors’ setting right. But… it is a TV show that people view on TVs and monitors, right?

Like, really? People watch TV shows on their TVs? What’s next, you gonna tell me they don’t own a private racetrack for their Ferraris neither?

It’s a little baffling how disconnected from reality can be some professionals. Future employers should bear that in mind, because delivering a poor TV experience to your TV audiences isn’t best practice no matter if you are GoT.

It’s a little baffling how disconnected from reality can be some professionals. Future employers should bear that in mind, because delivering a poor TV experience to your TV audiences isn’t best practice no matter if you are GoT.

I know that for a fact, so much in fact, the government is offering me a psychology related job starting at $60,000 a year, because employers can’t pay me, since they are too disconnected from reality.
Furthermore, I’m also an employer, and a professional employer too.
Additionally, both Google and Apple, 2 of the 2 largest companies, if not and when not the 2 largest, now offer non-college grad employment, but not to me, even though I have 25 years experience as well as studies.
With enough stocks , I can own both cies and Microsoft, plus a Tokyo bank and have major investments in German stocks and London Stock Exchange.

Yesterday, I just met someone who designed Electronic processors from a master in Electronic Engineering from the (a) University in New Jersey, whether the state one of Rutgers or others.
He asked me for a pen to scribble on a napkin, after which I gave him a sheet of paper, as I had some extra blank sheet, since I do write notes for work, which notes I describe and register copyright of.

Not surprising i’m in courts for that, even the courts refuse to protect my copyright for job search program, trying to make false excuse they see it as a threat to society, while they try to reject my job search for insurance, which is a requirement for employment insurance, while at the same time paying others for programs which don’t work and which they try to justify that work by teaming up with one another , while causing death by accidents and so on.
So, then, when the international military tribunal finds out, they offer me to go to their law school for it, because ballistic defense uses computerized data for navigation and other systems of operation, including orders and commands, which they deem, mine works good enough, and theirs is more a danger to society as well as actual death counts and trillions in losses.

By the way, the medical term , or diagnosis rather, for being out of contact with reality used to be psychotic or psychosis and came to encompass schizophrenia.
So, from a scientific point of view, you can see that, on a scale of 1 to 7 billion, everyone ranges into those numbers, until the population goes up, as to what level of this medical condition everyone suffers.
1 would be the lowest level, or least ill from that condition, while the last one, 7 billion , would be the worst, and most disconnected.
The numbers vary from time to time, and , after a certain level, warrants hospitalization, and even not allowing them out.
Some can be kept indefinitely.
Those numbers also vary from place to place.

In fact, if I study in Canada, they don’t respect my credit even if with honors as they claim false damage and danger while actively threatening me and lying they don’t and never did, while always having done it, more than 100% of my adult life.
It’s organized crime.

Some might say that after finding out that there is a rival between you and the prize of the Iron Throne, you might want to deploy all the troops loyal to her on the front line.

This way, if your highly trained psychotic half sister manages to finish the battle early by killing the big bad guy, you rival might find she doesn’t have many troops left to disrupt your future career plans.

Hmm… You have a point there.

BTW, since wights can’t swim, a moat around Winterfell might have been a little handy. Could have been dug by the all of the idle Unsullied, bannermen soldiers, and farmers hanging around. (Dothraki might or might not have been very helpful in a dirt-slinging project).

The Night King would have just bridged it with wight bodies, you say? Not if there was a quarter inch of oil or pitch floating on top, ready for Melisandre to ignite. Wights are highly inflammable, just a spark and their rotting flesh combusts like dry kindling. (It’s not physics, it’s a supernatural law, I know. I’m a fantasy fiction fan-- things work differently when sorcery has been involved). In fact, it you could just get of few of them burning, the fire could spread through the rest of the crew like wildfire. Problem solved.

Of course, the problem with this plan is, as always, supply and logistics. Gendry would have to make around 30k iron shovels, while also making the same number of dragonglass weapons. But, don’t know, could be possible.

Spoiler: Game of Thrones is a garbage show, and George R.R. Martin is a hack with zero self control. Whenever I see someone reading one of his 2,000+ page, self-indulgent tomes, I have to fight with myself not to smack the book from their clutches (I would prefer not to sustain unnecessary hand injuries taking swipes at bricks, you see).

BTW, since wights can’t swim, a moat around Winterfell might have been a little handy.

I suspect the Night King would just freeze it

I suspect the Night King would just freeze it

I suspect it would already be frozen, winter has arrived after all.