Stories From the Gallente/Caldari Warzone

Thought I post a quick microgang skirmish from Black Rise. Nothing big but I thought it was fun

I logged onto a Monday evening in Black Rise reading up on my daily intelligence reports across all channels. I received intel of 15-20 Gallente Militia pilots plexing up the system of Teimo to vulnerable. It was already at 98% when I heard the news. There was a 6-man public militia fleet being led by @Ichinumi_Tsukaya . He was doing his best to slow the Teimo assault but he needed more pilots to even up the odds.

The system count between both sides is 46 systems for Caldari while Gallente holds 55 with a Tier 3 to Tier 2 advantage. We’ve been trying to make a push into T3 but momentum has stalled in the last few weeks. We’ve made some headway in recent days taking 2 more systems but I didn’t want to lose a system in the process. I only had an hour to play so my options were limited.

I looked in Bloc alliance with only 7 pilots logged on for a Monday evening. So I did what any FC does in this situation. I skilled up Cat Herding to Level IV and started coercing pilots to join. I first bugged the reliable @Supernova_Surferess who is on EU timezone but an early riser. The guy was barely awake and hadn’t had his morning coffee yet but he was game. I then asked for Atom Vakarian to join the fight against the Federation. He was more interested in soloing some pilots in the system of Odamia. But I promised him candy if he got in the van. He accepted. And then my co-FC @Alesandros_Mornhavon instantly joined as he has a fetish for anything nanoish. He loves running Jackdaw fleets. I’m sure in some other lifetime, he would’ve made a great Goon FC. Grrrhhh.

With 3 grizzled vets who knew what they were doing, I chose to use the Wispa Nano Hookbills doctrine for flexibility and fighting outnumbered in plexes. But what can 4 hookbills do against against 3-1 odds, you ask? Quite a bit, actually 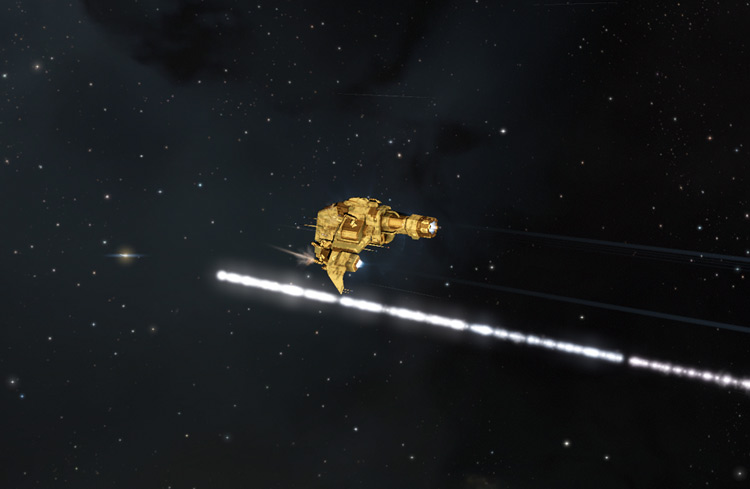 We free burned to Teimo. Unfortunately, the public fleet was closing down. But I managed to get a couple of the militia pilots from the public fleet to join mine and show them the ways of the Hookbill. The system was already vulnerable when we got there and the Mecha Enterprise/Aideron Robotics gallente fleet was on the ihub with an assortment of frigs, dessies, and BCs. We warped in and engaged at the desired optimal of 60-80km relying on the deadly speed, alpha, and range of our doctrine. We were doing drive bys and picking off outliers. In essence, we were being a nuisance. But as I was maneuvering my fleet around the grid, I noticed one of the militia pilots who joined my fleet had a difficult time just anchoring on me. He was more than 40km from my anchor and was stuck in the middle of their wolfpack apparently confused and unable to figure out where his friendly fleet was. He soon died. Outside of that minor casualty, we managed to scare off an entire 20 man fleet. Not just off the ihub but out of the system. Not bad for just 6 and a half pilots!

Proud of our effort to slow the progress down, we started looting field and all the drones left behind! Before we could enjoy our loot, we were met with a new hostile fleet by the pirate corp, Dirt N Glitter. They were running a 9 man Merlin + Bantam fleet and caught me by surprise as they landed 30km away from us. We kicked our propulsion into overdrive and started maneuvering around the grid to establish better position. I noticed the merlins were eager and gave chase to us by overheating their prop module beyond 4,000 meters per second. No doubt confident they could pull within scram range of our fragile ships. In their eager pursuit, they’d soon end up being separated from their bantam logi.

You see, the key here is to show enough leg and feign vulnerability to make the hostile fleet think it has you where they want you. If you establish too much distance between you and the hostile fleet, they give up and won’t fight. If you give them too much ground, you risk losing your entire fleet. So you’re looking for the Goldilock zone. It’s gotta be just right.

That’s where @Supernova_Surferess comes into play as he almost got tackled a couple of times as he struggled to keep up with me. He wasn’t feiging anything. He really was in trouble. Apparently he didn’t have strong enough coffee that morning! So he teased and showed some of those sexy legs while I kept calling targets. Within a few minutes, their fleet succumbed to the power of the Wispa Hookbill. A doctrine originally designed to fight off waves of derptrons in plex fights.

Round 3
I knew it was only a matter of time before the Gallente fleet would make its way back to Teimo with a heavy Battlecruiser and Battleship doctrine to kill of the ihub. We’d obviously be no match to that and I had to go soon so I couldn’t be bothered to babysit a system. I heard of a Templis fleet forming up to go fight them. So we headed back to Akidagi and formed up with them in a heavy armor doctrine which consisted of a Nestor and Vindicator as standouts. 30 minutes passed before a wild Gallente fleet appeared in Teimo again. We made our way over and curbstomped everything with barely a scratch to our fleet.

So in total, 3 rounds of fights in just over an hour. So not bad.

To the young pilots and aspiring FCs in New Eden; Never let anyone tell you that you need equal or greater numbers to make a difference in a fight. The right mindset and surrounding yourself with the right pilots will always go a long way.

And as of this morning, Teimo is still in our hands

Screenshot of the KB for that night 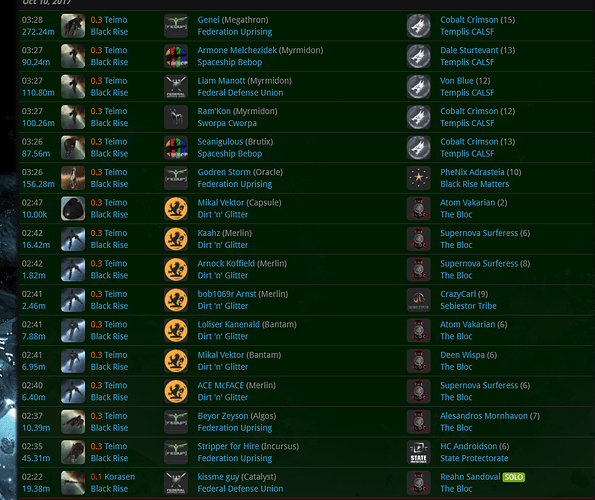 I skilled up Cat Herding to Level IV

I should extract Overly Opinionated down to IV and bump that up to two. I hear it gets synergy bonus from Cry Wolf, but it don’t help much past III.

Ragtag kitchen sink stuff. Three active rep Myrms, some armor, some shield. Brutix active rep too. Poor bastards never had a chance. You guys dropped on them from a citadel in system? Nice catch and point spreading, btw.

reminds me of the exciting times in the amarr/minmatar zone. sadly those are far behind us…

Glad to see the caldari getting in on these battle reports. Nice job!

The Caldari Militia which consisted of Templis and Bloc Alliance, originally formed up a Gila/Basi fleet to go fight another group. Unfortunately, the fight did not happen but before we stood down, we received intel of a Salt Farmer Gila fleet. This is a German pirate group that recently moved in 2 jumps away in Kehjari and had been RFing structures. Apparently, they were RFing a Raituru in Eha. We freeburned our way over to Eha but they just had RFed it and went back home to Kehjari which was 2 jumps away. They saw us coming and decided they would fight us in Martoh on the Kehjari gate. They had a Gila doctrine but no Basi support on grid. Knowing they have capital support, we knew that this was obvious bait but were unsure of how many capitals and FAXes they would drop on us. We decided to take the fight and let fate decide the rest.

As soon as the fight commenced, a hostile Lif cynoed in. Unfortunately, the FAX proved ineffective for them as we were making quick work of their Gila fleet even with the LIF on grid. We brought in several dreads to kill off the Lif pilot as well. And that ended the fight.

But before we could celebrate, they decided to escalate and cyno in 2 Super Carriers on us. Our dread pilots were still in siege mode and were sitting ducks against the dps of 2 Supers. In order to buy our dreads some time to exit seige and leave system, we ended up killing off their Fighter Bombers to help mitigate DPS. We were making slow work of the Cyclops while our skeleton crew of Basi pilots were trying desperately to keep reps on the remaining seiged Naglfar and feeding him enough capacitor so he can jump out. In what seemed like an eternity, our last Naglfar pilot finally exited seige mode and manage to jump out…with 8% structure left on his ship! 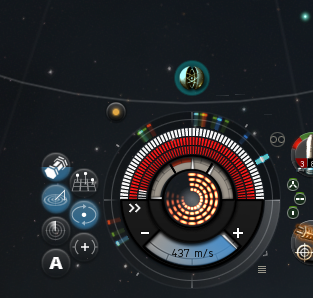