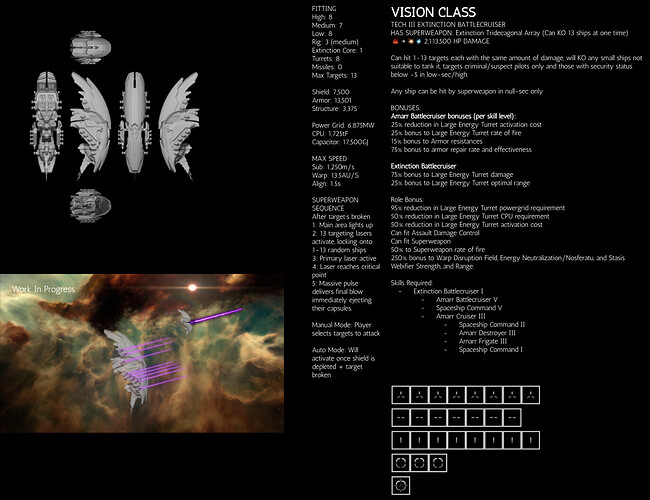 Well, I’ll give you an A for effort.

Also, this has to be a troll, right? I mean, I’ve seen people propose some OP ships before, but this takes the cake.

thx for your support

i agree, having a ship that can KO 13 ships and has less than a 2 second align time seems pretty OP to me, great concept though, truly, that in itself is worth the merit and +1 alone.

but i think needs some tweeking to be balanced better.

It is useful for those anti-ganking

just for clarification, would you be kind enough to please define what you mean by “Anti-Ganking” for me?

He means taking his 100b t3 oracle and 1 shotting 13 destroyers who are about to suacide a vexor in high sec and then getting concorded, saving the poor 60mil vexor from a gank.

P.S: This superweapon aims for criminals or suspects only in high sec. The player can choose which targets to hit and can choose between 1-13 targets, depending on how many gankers there are on gate.

There are corps and alliances out there who send out a mass fleet of Catalysts, Coercers, Thrashers, and or Talos who gank freighters, attacking innocent players. (Charon, Obelisk, Fenrir, Providence) and or high-value ships (Paladin, Nestor, Leshak, Rattlesnake, etc.) none other than the cargo they are carrying. Then one of their haulers come in and scoop up all the loot. Anti-gankers are meant to protect freighters and high-value ships from getting attacked while transporting their cargo through high-sec space, especially Uedama.

And, since it only aims for suspects and or criminals in high-sec space, it can use the superweapon without CONCORD interference.

So the judge dread of high sec?

yep. This is made for protection of innocent players in high-sec from ganking corps or alliances such as Safety, Novus Ordo, CODE, etc.

The T3 speed-tank as well, allowing it to miss any incoming damage. It will still move at max speed, even after the superweapon sequence is complete

This is what inspired me to design the T3 Oracle

There is a restriction that may help a bit, it is rendered not useable for those with a security status lower than -5. They are going to have to raise their security status to 0 or above to use it.

We all thought you where joking btw with this post no one is going to allow a med ship hull to do 2mil damage burst that can take out half a carrier to a single ship nvm 13.

Like for example something that is more reasonable is:
T3 Electronic attack Griffen, has 100% more ecm str vs targets with low security status
or something along those lines.
Or even a module that works with security status instead of the usual radar grav mag so on.

What is unique about gankers? Their sec status + them living in high so base the design around that.

To beat gankers you dont need to destroy them you just have to lower their dps so they fail to eliminate their target before concord get them.

Even better make the e-war module a low slot so freightors and haulers can sacrifice cargo space or align time for some jams, the randomness of jam’s is perfect to introduce a bit of spice to gankers perfect math.

I have partially recreated the Uedama gate, best I could do, but this demonstrates the T3 Oracle Superweapon. This picture represents what a ganking operation would look like with the T3 Oracle in the background. This is the best of what I could recreate. Icon credits go to EVE University 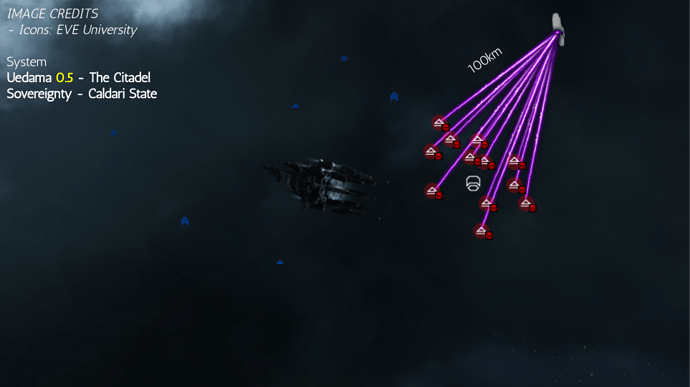