that bugreport includes a patch file to fix the issue. How do I apply it?

All of the workarounds here involve Steam. I am not launching EVE with steam. I’m using the latest native evelauncher on Arch linux.

My files are in

I’m not sure where to copy them to in this situation. I have no SharedCache dir. Is there another directory this file needs to be in?

No, your files look good to me, just don’t forget to CHMOD 444 them.
I also do not use Steam and that’s working nicely for me.

Word on the street is that the native launcher has the same problem loading several other libraries due to a combination of the Wine bug and storing them in different locations than the Windows launcher. If at all possible I recommend switching away from the native launcher and just using wine-staging + windows launcher as it’s going to be easier to support in the long run. As a quick hack to see if it works, you can copy all the .pyd files out of the bin64 directory up into tq.

Thank you for investigating it.
I’ve patch proton-ge with your finding to help ppl on steam. 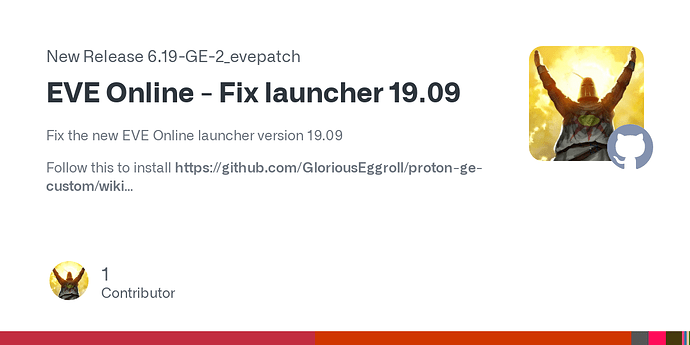 Hey, I am a fairly new Linux user. I hadn’t been on the doze side for a few months until the Eve crash. I hated not playing. Anyway, all is back to Linux bliss.

The patches are still sitting in queue upstream and didn’t make the 6.20 release. I asked the maintainers if something was wrong with them and they said they don’t have enough maintainers that understand that area of the code and they’re afraid they wouldn’t be able to review properly.

Not sure what the end result is going to be but if push comes to shove we can try submitting to wine-staging instead. Will update the thread if I hear anything else.

The patch had been integrated to proton-6.20-GE-1

Migrated my WINE to 6.20 (staging) with the result, that the issue with “launchdarkly_client.pyd” file is still there

However, it still was worth to do the migration as the EVE launcher is now working much better. In the previous version font rendering was partially broken, this is now fixed with the new version

The first draft of the patchset was rejected upstream due to some cosmetic stuff in the conformance tests. The tests patch was cleaned up and resubmitted, hopefully its getting close

The new update did another stupid idiocy on the EVE install… did you notice? it deleted everything except the launchdarkly.pyd and some folders, and on the bin64 folder also deleted over 160 items and only left alive 3 folders.

This is moronic… are they deleting files also on windows?

I’m not seeing that but maybe I haven’t gotten the update yet? I’ve still got drive_c/EVE/SharedCache/tq/bin64 and most of the files are still in there. It’s possible they might move files around from time to time but if the game still runs you probably dont have much to worry about

The game doesnt work on the eveprefix folder which I did recently, it works on my linux native launcher.

I could copy the files from one side to the other, and test…

hahahaha, who could believe this???

I tried running the eveprefix launcher again, and lo and behold… it launched, and client now works fine. Not only that, but now the darn folder has the files again. This is crazy.

@Renard_DuGaulle Thanks for investigating, fixing and submitting the patch!

Just tested on two machines, workaround by copying up one level and chmod 444 is working perfectly for now.

I came back after a break, saw the forum post about launcher not working in linux and the recommendation to use steam client. For record the steam launcher is garbage, it crashes if I as much look at it… So I was about to give up, but I thought what the heck maybe I’ll just try https://binaries.eveonline.com/evelauncher-1747682.tar.gz

extracted the file as normal and ran ./evelauncher.sh and allowed it to download and install wine and patch as normal. I expected to fail but it just werks? I’m using gentoo and all seems to be fine, I did set it to use the beta in the launcher settings but I didn’t see it update or need to restart the launcher or anything. Hmmm its all strange to me because I saw how many people had issues, perhaps it all happened while I was gone for a couple of month. But this method is how I’ve played the past year with no issues, glad its working.

As for the reason for breakage being CCP wanting to use some windows libs for more security, hahaha what a giggle, why don’t they just allow us to disable that if we use our phones as secondary form of auth? 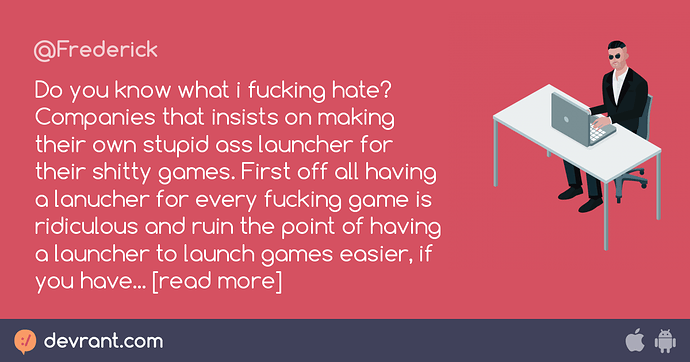 Connect with fellow developers over fun rants about tech

r/pcgaming - Am I the only one fed up with extraneous launchers?

r/pcgaming - Is anybody else really sick of having to use launchers to...

Launcher Version 1967440 is working fine with my Wine staging.