Patches are still in the review queue and Alexandre Julliard announced a code freeze in the next few weeks for the upcoming 7.0. I’m going to keep trying to get the patches upstreamed but I’m going to additionally request that they get included in wine-staging, which should hopefully be a faster process.

The patches were accepted in upstream wine!!!

Wine 6.23 will have the fix for the launchdarkly BS

It worked but the next issue is the game performance which is not there. In windows i get 40-50fps and in Linux 4-5fps.
I’m using a Radeon HD 7750 which is quite old but i don’t know. it feels like the game is not GPU accelerated.

Do you check your FPS ingame with CTRL-F? That should tell you what is used to render the game.

You have to install DXVK to get a decent framerate, I posted instructions somewhere on the forums here for how to do that. Alternatively I think Proton has it built in but I’m not sure

I’m kinda new to linux and i don’t know if i installed everything right. To start the Eve launcher i right click and chose open with wine program loader.

Here is some GPU info and i don’t know, i’m gonna look into it, maybe i don’t have the proper drivers or maybe the GPU is not supported.

I recommend not using steam as it complicates things somewhat and doesn’t gain you much. That guide should walk you through setting it up with the upstream installer. If you need features from steam it’s doable but since I don’t use steam I won’t be able to help you set it up

Proton should indeed have DXVK support built-in.
I am used to start my steam games through steam, so I am not sure if running EVE directly with wine is circumventing that somehow? Can you try starting EVE with steam?

Also for checking if you have vulkan installed run this in your console:

I couldn’t start Eve from Steam, it won’t launch the Eve launcher.
Didn’t have vulkan, now i have it.

Followed the guide to use it without steam but the performance is way worse. It’s using LLVMpipe which doesn’t seem right.

IIRC llvmpipe means it didn’t find a device it could use and fell back to CPU rendering. Do you have vulkan drivers installed for your video card?

This seems to be a Linux problem and not a Eve problem. My config is broken or the GPU is not supported, i don’t know for sure, need to look more into it.

Seems like vulkan doesn’t recognize my GPU and it’s only using software acceleration(LLVM).
I tried removing the lvp_icd.x86_64.json and lvp_icd.i686.json from /usr/share/vulkan/icd.d to force hardware acceleration but then the game won’t start, maybe because there is no physical GPU listed there to fall-back to.

This may help. I think only fedora has default AMD, Ubuntu has default Nvidia if not mistaken.

I manage to fix it by editing grub and force amdgpu (newest linux drivers) instead of radeon (old drivers which may not have vulkan support)
(how can I use "amdgpu" instead of "radeon" drivers on 20.04? - Ask Ubuntu)

It’s working fine now, 15 less fps than in Windows and get a little static cracks. Graphics pipe is at 50% so might be more CPU bound. 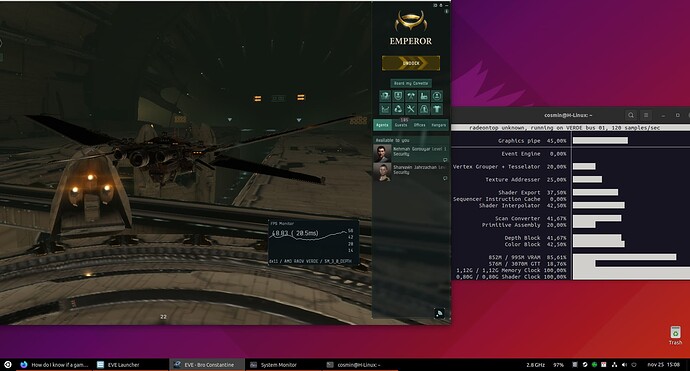 I can confirm that wine-6.23 (Staging) is resolving the “launchdarkly_client.pyd” issue.
Praise the wine team and everybody who made this possible!