After a wildly off-topic discussion in another thread, I thought it would be fun to set up some ground rules a PvE Ironman challenge in EVE. This is a work in progress and I welcome suggestions on other rules and goals.

The challenge will be played on trust. There’s nothing that can strictly enforce these rules but it’s a personal challenge so hopefully most people will play along in good faith. It’s not a race or a leaderboard or anything like that, it’s just a bit of fun.

The aim is to try to play the game with the least amount of player contact.
At the moment the “end-game” aim is to build a fully fit battleship but I’m open to suggestions. I’ve added some ideas for goals below.

Rules:
The core of the rules is that you must not interact with players in gameplay as much as possible.

If you decide you want to give the challenge a go, feel free to post below and keep people updated with progress. If you have any suggestions or comments, post those too. 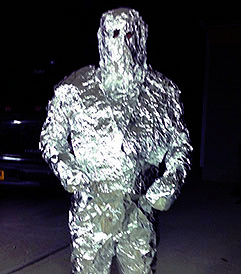 Want a fun event? Put a special item into a can in a random system somewhere not in high-sec, and the first person to recover it without dying (can API-verify) gets 1,000 PLEX. Bam, instant fun event that people will actually want to participate in.

That would be a completely different type challenge though. An like I say this is a personal challenge so if people want to cheat, they can but they are only cheating themselves. The prize is the accomplishment, knowing you took on a tough challenge and succeded. The end goal I think needs to be ramped up a bit though.

I’ve played a lot of games back through in ironman mode, often single player games where the restrictions are just rules you force yourself to adhere to, like playing FF7 with no materia or playing Diablo without ever going back to town and in both cases restarting completely when killed. I think building up a set of rules for EVE is a fun idea, though I understand it’s not going to be for everyone.

Grindy. It was bad enough the first time round WITH being able to buy stuff off market…

The hard part will be building up the resources without a mining barge, or having to get a barge BPO from NPC sellers in nullsec

watch you dont cut yourself on that wit you have, it truly is sharp…

If you think thats the hard part your mistaken.

It’s made harder by the fact that you have to build any ships and modules you use to get there and if you get podded you biomass your character. You also can’t use alts or other players for things like scouting (which I’ll have to update in the rules).

I applaud your stoic cynicism, you truly are a marvel.

you truly are a marvel.

Yeah I think buying it won’t be the problem but getting it back to wherever you’re building your battleship will be. Maybe that in itself should be a goal though.

I’m thinking of going with a checklist of goals if I can think of enough. Maybe a bingo card

I’m going to give this ago, just have to think up a suitably silly name for the alt.

No, something in Ramona’s post gave me an idea.

So these are some other potential goals I’ve come up with so far.

If you build it:

It’s all about the tracker:

Where do we stand:

Let’s be absolutely clear: This is a stupid idea. However, I am nothing if not stupid, and I decided to give it a try. It’s going to be a long grind with a few interesting bits here and there, but some would say that’s true of EVE in general, so I guess that’s fine.

The first thing to do was selecting a race. At first it seemed obvious to me that a reclusive player, running missions and mining without so much as the occasional comment in local, would be Caldari - I see them out there in their Ravens, and I’ve learned to shy away from their kind. Were I to become one of that lonely brotherhood? The initial buildup phase made me change my mind. There would be more than enough to produce at first, and dedicating valuable minerals to ammo production seemed like a bad idea. Besides, lasers are cool. I created a dashing Amarr youth, eager to make a name for himself: 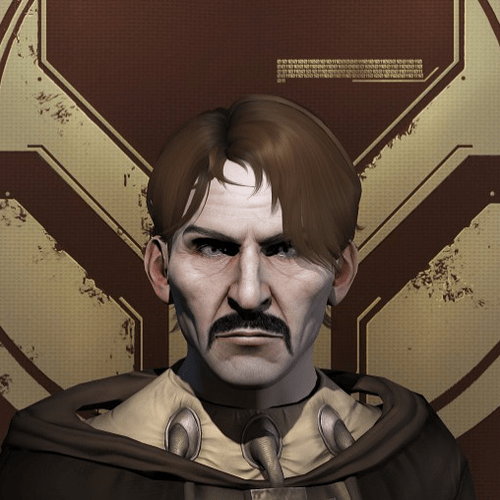 I went through the tutorials and career agent missions fairly quickly, with one nagging exception: Balancing the Books 6 wants you to deliver a Tracking Computer I, sourced any way you like. Without access to the player market, that hurdle becomes quite a bit taller, to the tune of 8 million ISK for a blueprint. After I’d finished the other missions I did have that much, but there were many other blueprints to buy, and those would actually help me progress. I postponed the mission for the time being. and it turned out there were no NPC sales for that blueprint in my home region.

Then I went on a shopping spree. I expect to fit ships with found meta modules fairly soon, but you gotta have stuff to find stuff, so I set about building the very basics. My limited production capacity quickly became more of a problem than minerals were, and I had to queue up a few levels of industry and mass production right away. In the meantime, I installed my first run of small focused beam lasers and began working on LP. 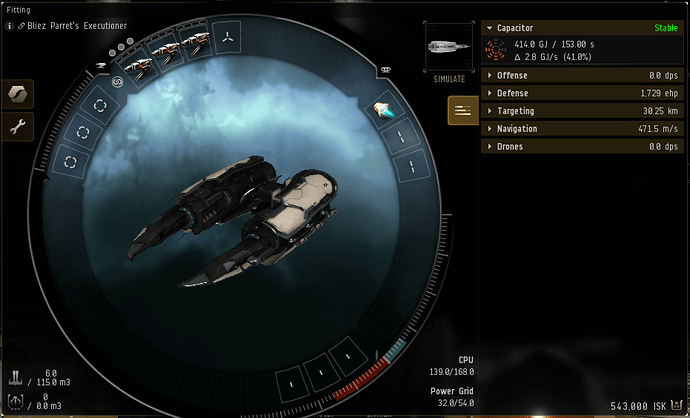 Cap stable. That’s good, right? Anyway, I found an enduring armor repper almost immediately, so things were looking up. But then, disaster: I received an eve-mail from somebody encouraging me to join a corp. I was frankly disgusted. EVE is a sandbox, I’m sure you’ve heard it said, but nobody’s ever called EVE a peoplebox. I want none of these people in my box. Block, delete. Once I’d calmed down, I minimized the local chat window, and got back to work.

While running missions I made sure to keep production running: A selection of ammo, two salvagers, a cap recharger. My tank still consisted of a named repper and a 100mm plate I’d scrounged, but level one missions being what they are, it’s not a huge problem. Once I get more production capacity I’ll make a couple of heat sinks, that’ll sort out tanking for the time being.

The sheer number of little things you need makes the first day quite busy. For some reason the bastards can’t simply sell blueprints in one convenient station! I spent rather a long time flying back and forth collecting prints for rigs, drones, frequency crystals, station containers, etc. Now that I have all I need immediately, I can settle down and get some real mission running / salvaging done. By tomorrow I hope to have a few drones, relic / data analyzers, and possibly even a tractor beam. Oh, and a sorely needed mining upgrade. A mission had a decent belt, and I just couldn’t help myself. Just a few cycles, that’s all I want. I can quit any time, honest. 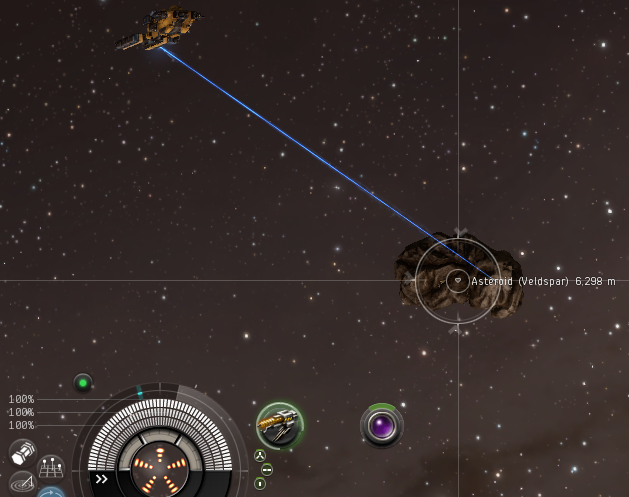 I’ll probably return with an update at some point - We’ll see when there’s anything worth mentioning. For now I’ll be missioning and slowly preparing for the jump to cruiser-sized modules.

I love the update, this could definitely be a blog. Keep them coming.

I went with Gallente as my first ever character was Gallente so I thought I’d stick to my roots.

Without access to the player market, that hurdle becomes quite a bit taller, to the tune of 8 million ISK for a blueprint.

Check the orders you’re looking at. NPC orders should be 99,000 ISK for that BPO.

But then, disaster: I received an eve-mail from somebody encouraging me to join a corp. I was frankly disgusted. EVE is a sandbox, I’m sure you’ve heard it said, but nobody’s ever called EVE a peoplebox. I want none of these people in my box. Block, delete.