The Future of Eve online

How does this even happen?

They are just not given a change to get started

They were given a chance, just like everyone else. They’ve stupidly decided early on that they don’t like some parts of the game and thus decided to leave. It’s their loss, not ours. They had the same chances as everyone else, including all of those who stay in the game. I guess this means you’re the King of that low quality social circle you’re in, assuming you’re actually playing.

They had the same chances as everyone else, including all of those who stay in the game.

I’m not sure of the context of the original quote “They are just not given a (chance)” because that post was near incomprehensible. I assume it was in reference to recent new players starting.

Just wanted to point out that new players today do not in fact have the same chances as 10-year players did, or 5-year, or 3 year players. The game, its’ rules and the ‘meta environment’ have evolved over time.

We’ve had variations in mining ability, high sec crime, ships available, market niches exploitable etc. There have been times when it was tougher on new players and times when there were more viable careers for new players (and more ISK / PvP opportunities) than there are today.

Overall, today I would say the ‘startup’ process for new players is easier than at most points in EVE’s history (tutorial, career agents, early missions etc.). However once that starter intro period is complete, today’s newbros face tougher competition in markets, in FW, in mining, in PvP and even from NPCs than they did in the past. This is simply due to the maturity of the game, the massive exploitation of niches in Null, FW and bot-farming, and the fact that the player base has been mostly distilled down to the longer term, more dedicated, more experienced players.

As in most mature markets, the rich get richer and the poor get poorer. What this says for the future of EVE Online has been made pretty clear by the player trends of the last 8 years or so.

The context was his friends, who have quit. His so called friends had the exact same chances as all other people who started around the same time.

Thanks for the context, I get your point now. Yes, comparing his friends at that point to all other new players at roughly the same time, those who stayed were dealing with all the same challenges and managed to get past them.

The only problem with that is, overall, there are more and more players like his friends who aren’t staying, and fewer who are “dealing with the challenges” and sticking around. That’s not just a problem with his friends, that’s a problem for the future of EVE.

there are more and more

CCP Hellmar said during the AMA that they’ve managed to increase player retention by a few percent, which, as he said, is actually a big deal.

TBH CCP Hilmar could say the sky was blue and I would still check the data very carefully before giving it more than a shred of credence. 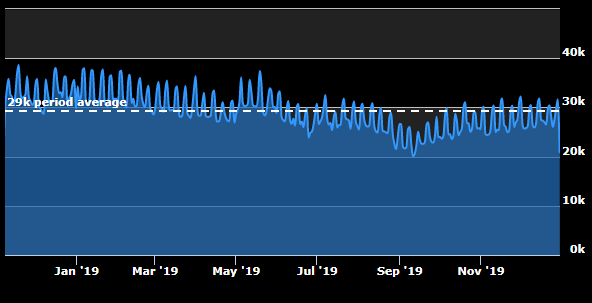 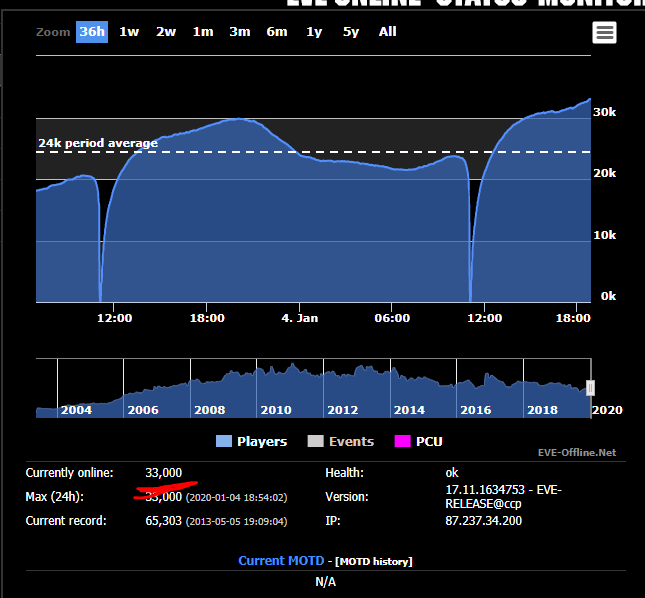 I’ve said that CCP Hellmar mentioned an increase in retention rate. You’ve posted a graph showing the whole last year, of which only the time post blackout is relevant to said increased retention rate, because he said that it’s something they’ve achieved post blackout. You probably weren’t aware of that, but you also most likely did not care to fact-check.

Fact is that over 75% of the image you’ve posted have zero connection to the increase in retention rate achieved after the blackout. Fact is that we’ve hit 33k again, unseen since blackout. Fact is that the PCU currently going upwards, with spikes reaching beyond that trend. These are those I did not mark. As you can see, I’ve marked the lowest spikes. If I were to mark the highest spikes, it’d still show an upwards trend.

Another fact is that looking at a single point of data, the PCU, is completely unreliable. We could be seeing a massive increase during one or more specific timezones without actually affecting the PCU. If there were one thousand more people playing in AUTZ we’d not be seeing that in the PCU, yet one thousand more people would be playing the game.

the future of eve online is one of eve offline.

Cant solo that content for more isk? dont want to get actual friends to help because you want it all? Pay CCP more and get MOAR Alts TODAY!

the future of eve online is one of eve offline.

Put your money where your mouth is.

oh its already on us, has been for a few years atleast now.

everyone in high sec HAS to solo everything, people wont even do frigate abyssals as a group because “Muh lootz”

went out to null sec and everyone is either doing “mining ops” with their alts or warping around in caps farming in 200+ man corps its just silent unless intel picks up a neut 10 jumps away.

In low sec ive met guys solo camping gates and stations with their alts. i did a cargo run for a friend who quit the game that was leaving null an put all his stuff in low sec, a tornado was camping the gate and couldnt get me, followed me to station still couldnt get me, online 19 more tornados just to try and get me.

Despite trying to be in more than pvp fleets or an incursion fleet (which are mostly dead now) its just station spinning of boredom.

If you’re so sure that EVE’s going to go offline, then I’m sure you’re having no issue betting ISK on that, because that ISK will go poof anyway.

went out to null sec

I don’t believe you.

I still don’t believe you

I’ve said that CCP Hellmar mentioned an increase in retention rate. You’ve posted a graph showing the whole last year, of which only the time post blackout is relevant to said increased retention rate

Sorry, you seem confused on a number of points.

I provided a years context on player numbers so that it would be clearly visible that current player numbers are 2,000-4,000 lower than they were this time last year. You posted a graph showing that numbers have increased somewhat since they bottomed out at their lowest point ever.

“Numbers have increased since their lowest point ever” is hardly a bragging point, in my opinion. The overall numbers are still lower than they were last year (which was my point). More people are leaving, and not enough people are staying to balance those numbers out.

You also don’t seem to realize that EVE Offline tracks the max players online every couple minutes all through the day. Your own 36h graph shows this clearly. Thus, all time zones are represented in it, and your several points regarding TZ limitations become meaningless.

You may wish to believe Hilmar has some magical data that provides more hope than ‘holiday/winter season numbers generally go up anyway, particularly after a disastrous experiment that crushed player numbers’, but in the meantime I’ll just stick to reality, thanks.

Okay, EVE is dying. As usual.

The future is a boring and static game no one plays but only a few old and crusty nerds with confused priorities in life.

All the ganker? not many ganker anymore, people could just learn to think so they wouldn’t get in trouble

Its really not about ganking or the risk of being ganked. People join this game because they hear the stories, which usually involve dubious activities, large scale wars, and general “high risk gameplay”

What drives people away new is the insane mountain of knowledge needed to enjoy the game. its always been a very shallow introduction to eve for a new player, then ???. Id say most are driven away by the lack of direct control of their ship, which admittedly is a hallmark feature.

Having recently come back, it took me a while to figure out where i was, how to get around, and i still havent figured out what i need to do. This is from someone who has played, its much worse for people who are new.

Basically the future needs to be an environment where large wars will happen, which draw in new people…but also a better intro to the game…better game systems teaching how to rat, scan, ect, and get familiar with the game before looking to get into the big war stuff.

But no, it has nothing to do with CODE or high sec gankers, or a new way for a small percent of veterans to play.

Hi, I very much disagree with you, as for my case.
I play eve because of the complexity and because of the learning curve. Because of it.
If EVE didn’t have it then I wouldn’t play it.
EVE is not the most difficult MMO I ever played, nor the most complex. It is like bacon. It could be old, but it’s still bacon. There is no equial replacement to EVE.

You may say what to change, but the thing is that EVE lasts because of something.

I started playing because it was going to be even more pretty and deep, with avatar gameplay. I think the biggest mistake was them resigning from it. Without it future always looked more bleak, for me at least.

I see a future when one guy will be able to control half of the active capsuleer IG. Some kind of deserted solo online game.