Theory on what the Triglavians are doing with stars

This is my first post on the forums, so I don’t really know if this is where I would put this, but I’m gonna go for it.

Yesterday, I was looking over the report made by the Arataka Research Consortium concerning which stars are in danger for the Triglavian invasion. As I was doing that, something clicked in my head about what exactly they intend to do, other than just being grumpy about capsuleers running around their space and giving them a piece of their own medicine.

I think the Triglavians are trying to open Abyssal Deadspace. Permanently.

We know that Triglavian power sources are based on singularities, being the mini black holes floating in their ships. Unless I’m wrong, we don’t quite know just yet how they make them, but we know that they can. Its also most likely that it is an artificial process, as black holes that small don’t form naturally (as far as we’re aware).

Considering the target type of stars, both A and B type stars are pretty high up there on the main sequence (being 3rd and 2nd respectively), and thus have relatively high mass (~2 solar masses and 2-16 solar masses respectively).

In the staging systems that have been found, we have seen pictures of large structures. Quite a few people (myself included) believe that its a Dyson structure of sorts (shell, swarm, bubble, etc.). Now, the infrastructure to properly envelop an entire star is incredibly high, and considering the number of systems that look like are going to be invaded makes this prospect a little out there.

However (and this is where it starts going down the rabbit hole theoretical physics that, to be honest, I don’t fully understand), if you were to redirect that energy into a star, even if you only collected it in smaller quantities, that has the potential to force stellar fusion. For the larger of the B type stars, this would eventually end up in a black hole, i.e., a singularity (for the smaller stars, maybe it could be forced in the same way they make their ship-board singularities). Not only is building infrastructure around a black hole much easier, but containing and harnessing the energy of singularities is something that Triglavians do on a regular basis.

Now, this on its own is already a REALLY big problem, even if only a fraction of the stars original power gets translated into the singularity in its creation. To put it into perspective, Altair, an A type star, emits about 4.05 x 10^27 watts in photons. This is 4.05 sextillion joules per second. With that amount of power, you can do nearly anything. You could destroy any fleet in existence, crack a planet, or theoretically, VERY THEORETICALLY, warp space time.

By using this ridiculous amount of energy and pumping into some kind of device (maybe something like a big filament?), it could potentially fuse abyssal deadspace and known space together in some weird way (this rabbit hole is endless). Not only does this have about 0.001% of a foundation in partially actual science, but it makes sense lore wise. The Triglavians have been stuck in abyssal deadspace for god knows how long, it would make sense that they would want to get out (unless its an acquired taste or something), and a takeover of pre-established governments would be a massive effort (relocating civilians or just “dealing” with them, establishing their unique infrastructure, it’d be a nightmare).

Please let me know if I missed any crucial information, I did think of this at midnight while I wasn’t exactly sane.

Okay, so I’m pretty sure I was wrong about this now, but deep down I had a feeling I was grasping at straws

I actually think your ideas go in the right direction, for what it’s worth

I laid down some of the reasoning in a post elsewhere earlier, but I’ll retread it here:

We know the Trigs have been modifying spacetime in Invaded systems since Chapter 1, and began to manipulate stars in Chapter 2, using their stellar accelerators - which have a description that supports what I & many others believe is their endgoal:

Quantum interactions similar to Triglavian space-time filament and conduit technology have been detected, and it is possible that the Collective are engaged in an effort to “weave” the star’s gravity well into their conduit network. The prospect of the Triglavians incorporating the system into their domains cannot be ruled out and merits forceful counter-action by New Eden’s defenders.

Chapter 3 brings the harvesting of stars for an unclear purpose, but we know that the Trigs:
– Lived in the Abyss safely for a long time
– Are no longer safe there
– Have said that those who prove themselves will be invited to the “Domain of Bujan”
– Are targeting Blue and Yellow stars - Blue stars being the only source of Isogen-5
– Isogen-5 is the requisite material to generate wormholes & other spacetime deformations

So I’m betting the end result of these invasions will be these systems becoming connected to “Triglavian space” deep in the Abyss, using the stars as a gateway - and supporting that, just look at the Chapter 3 promo image, where you can see a modified star, a gate on top of it, and Triglavian ships and an abyssal crystalline mass coming through. 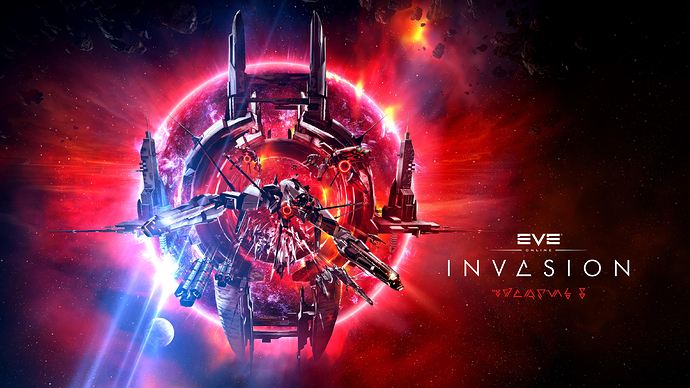 The Triglavian Collective is intended to become a permanent presence in New Eden, and there’s a lot that has to happen to solidify that development - there are obviously manifold goals the Invasions seek to accomplish, including the manipulation we’re seeing now, but it all seems to move toward their re-establishment in K-space - or as they call it, the “Ancient Domains”~

I think with the Zenith trailer, it’s all but confirmed that the systems are going to be connected to the abyss.

I had actually left eve about a month ago, and somehow they manage to rope me back in all over again, if only to find out what’s going to happen.

In my Quafe Zero induced haze I had a vision.
I seen a great flash, and the all gates in Vale lost power.
After my eyes adjusted to the light, a great darkness swept over the system, and there it was:
a wormhole not to the abyss, but to derelect Jovian space, weakened and ready to be reclaimed.
I even heard Zorya’s voice calling to me, “Quafe, Quafe, you are having a medical emergency”.

Next thing you know, I am awake in a fresh new clone.

the course of the flow of Vyraj from the domain of Bujan to the ancient domains shall pass from first liminality, through second liminality, at last to breach third liminality.

as the flow of Vyraj brings communion of the Sobornost to those that may be fit for glorification, the flow shall cleave and cladistic proving shall begin anew in the ancient domains.

as the Sobornost and Kybernauts pass over the waters of communion, the floods of liminality shall cover the faces of Immanent Glory and Immanent Gold alike.

You are probably right with the gates to abyssal space being connected. However, the trigs and edencom are ultimately going to become new racial factions. they are nearly done getting their territories claimed, and players are helping to decide who gets which system(s). So be prepared for having not 4 main racial factions, but 6.

Sort of hoping for this and in the end wish they cool their guns and stop firing on pilots with neutral standing.