This forum is brutal

Remember, unlike weed, you don’t wanna hold your breath while smoking meth. It’s bad for your lungs

I’ll pass the info on, thank you for the tip

On a forum? In a game? Isn’t that a bit extreme?

People think their opinion is fact. Others say ‘think of the children’.

If you stick around a while you’ll see it’s very common.

It is very common, especially in politics. But calling bs on someone can be done without insulting their whole family and ancestors.

As a new player I would have thought you would be asking about mining or missions, some PI some pvp some eve related stuff, but alas no, nothing but passively questioning the ethical posting techniques of the regular forum poster. I find this scenario very interesting looking forward too seeing where this eventually ends up.

looking forward too seeing where this eventually ends up. 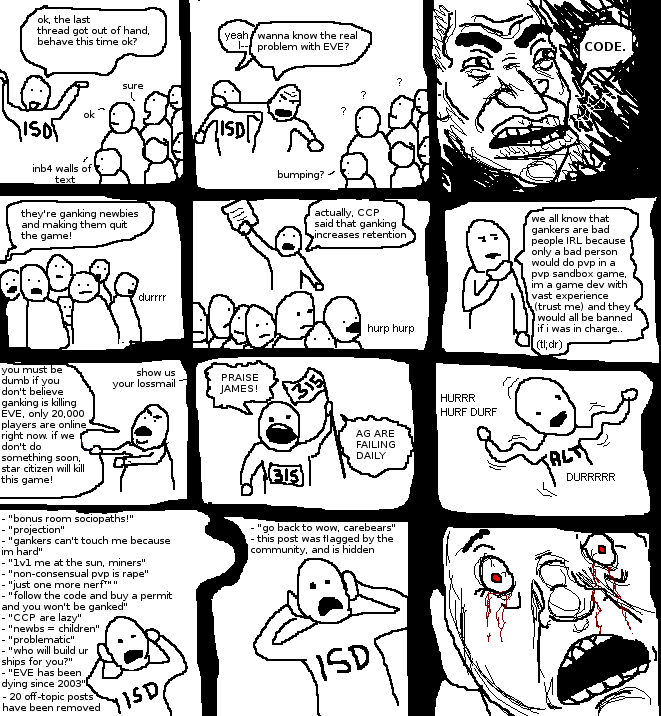 I had the same experience when I joined, not too long ago: Not very inviting

I solved this by blocking each and any negative Andy, troll, screeching spam poster or anyone else with a low signal to noise ratio. I do the same with several threads, if it turns into a ■■■■ show I’ll just mute that thread so I never have to see it again so the negative vibes won’t affect me. It’s an ongoing process.

It’s fine and even good to disagree and have a strong discussion but I’m in no way going to let negative folks affect my chill. If something turns into a back and forth I’ll just stop bothering or posting, once I stated my views on something I’ll leave it at that and if they’re so eager to get the last reply in then I wish them GL with that.

Block out the bad vibes.

But now we have to discuss ‘what is an insult’. People will always skirt across the line whilst pretending to be innocent.

But no, an insult is very clearly defined : it’s a negative term that you associate to someone.
Does not need to be intentional.
What we can argue about is “what is negative”. And then it’s very clear : if I disagree with you and make personal attacks that convey a judgement, then it’s an insult. (you can make personal attacks that are not insulting, for example claiming that your need to argue about the topic comes from reason X or Y)

The moment a person makes a personal attack in a discussion (or an insult), then he acknowledges he has lost the discussion, because he admits he has no argument on the topic and needs to go off topic.

So yes, insults (and personal attacks) prevent by definition a discussion. Unless of course the topic is about insults ^^ . Also this assumes the topic was still a discussion : if you start insulting me or making personal attack, you already admitted defeat and thus I can insult you back since I already won the discussion.

Are you all rivals in the game?

No we just wish we were playing a game that actually could cater that.

since I already won the discussion

Different people, different goals but to me it’s not about “winning” a discussion. It’s about exchanging information, views and perhaps come to a consensus.

Sometimes the divide is too great to get a consensus.

Different people, different goals but to me it’s not about “winning” a discussion. It’s about exchanging information, views and perhaps come to a consensus.

Indeed for most people, but not for the people who start insulting.

For those people, it’s only about making aggressive assessment about people with a different opinion.
Yes, that’s also called harassment.

Some people may think it makes a better man of themselves to start insulting other. Some people may believe it’s funny.
Fact is, some people are insulting whenever someone disagrees with them. and/or making personal attacks.

Do people ever reach a consensus anymore

The ones who aren’t capable of that, or aren’t even willing to try, are not worth one’s time to interact with.

We reached a consensus that we hate eachother. That’s something ?

Give me your lunch money.

I love you Anderson, you are just too stubborn to accept it.

I hate you, was told it’s the other side of the love coin.

Yes most threads reach a consensus, we all agree that the threads been locked by the forum mods.