This may have been coverered already, but what happens when Iceland Sinks into the Sea?

17.000 tremors in the past week, biggest at 5.6, at least one major quake or eruption expected. Seriously, what happens if head office is evacuated? The game servers are in England. But is everything needed to run the game there?

I thought that this just another normal day on island?

More likely that everything is buried under ash and lava than sink into the sea.

Also. Where have you been? It’s been ages since I’ve seen you post.

Actually, this is far from the norm.

It is not going to sink, it is going to get more hot land above already erupted one.

So you live in Iceland?

Event involving a lot of water may be only Jökulhlaup - Wikipedia

No, but I can read quotes from various news sources that include quotes from local agencies.

" Elísabet Pálmadóttir, specialist in natural hazards at the Icelandic Meteorological Office, told CNN that authorities are deploying surveillance equipment in the area, from GPS and earthquake monitors to web cameras and gas detectors.

She too can’t remember having ever experienced so many earthquakes over such a long period of time. She warns that a more powerful event could be cause for concern, and estimates that the area could experience a magnitude 6 earthquake or above.

“In this particular area, where we’ve seen activity in the past week, we could experience a magnitude 6.0 earthquake. But we could have a 6.5 to the east of the area, east of the Kleifarvatn Lake,” she says."

And “Víðir Reynisson, Chief Superintendent at Iceland’s Department for Civil Protection and Emergency Management, told a news conference on Wednesday that an eruption was “more likely than not” within the next few hours. It would be the first in the area since the 12th century.” 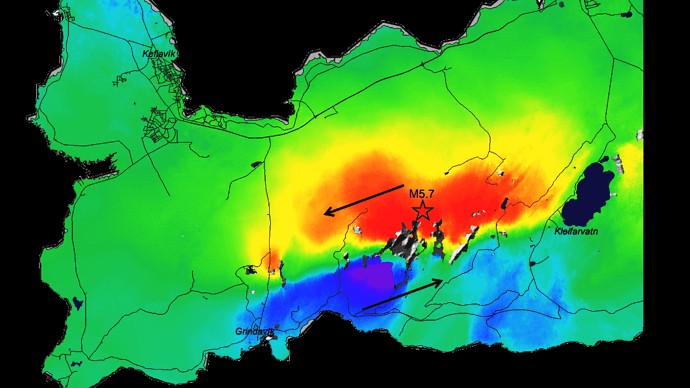 An Earthquake swarm is underway in Iceland, with over 10.000 earthquakes...

A risk of a volcanic eruption is increasing, as the powerful Earthquake swarm continues on the Reykjanes Peninsula in Iceland

Close to the capital of Iceland, but still not dangerous enough to cause very big disturbance in lifes of major amount of Icelanders. Few roads may be blocked by lava flow.

Also same person that was quoted above said that even in case eruption no settlement is in danger.

btw. Edit first post and move this to #communications:out-of-pod

Oh, that title made me think you where concerned about the people in Iceland… and not about some computer game that might be temporarily interrupted… WTF

We’re over populated but EVE is unique.

Since the servers are located in England and CCP has Offices located in different countries around the world, I don’t see the game being disrupted if CCP has to evacuate their headquarters in Iceland.

It’s the end of the world, and I feel fine.

Since the servers are located in England

England is an island, too. A disaster big enough to have Iceland sink into the sea will hardly leave England unaffected. Dark days of downtime should be expected.

Well, if the quakes are just rumblings of an active Volcano that might erupt then I agree with @Nana_Skalski, Iceland won’t sink into the ocean, it’ll just get more hot land spewed onto it…

what happens if head office is evacuated?

Ok CCP - what are the facts?

If Iceland slips into a LAKE OF FIRE, will we get refunds?

Iceland is not, infact, made of ice at all but some sort of hard substance called “rock”

I don’t think there’s all that much to worry about, but the concern (for the game at least

Even if we did have to evacuate, this last year of heavy work-from-home has us well and prepared to keep working from our personal computers in the back of a van as we drive away from a slowly encroaching lava flow.

That said, this particular eruption isn’t expected to impact us.