Training times... which is correct?

I am training a skill, the mouseover of my skills says 1d 17hrs… the main screen says 2d 10hr 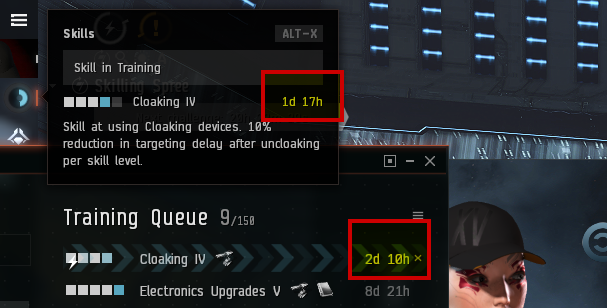 If I recall correctly, the hover-over is the incorrect one.

I’m guessing you have some sort of time-limited cerebral accelerator consumed, because I saw this too. I did the math but forget which it was, but I’m pretty sure it is the hover-over that is incorrect – it’s computing the entire rest of the skill pool you have to accumulate as if it were covered by an accelerator forever and ever.

The reason I think it’s the hover-over that’s incorrect is because I remember the mnemonic “The skill queue window always shows the correct time-to-skill”.

Oh that makes sense. yeh I have a master at arms running, but it is near end of life.

the mouseover is incorrect, it doesn’t put into account of implants, and remaps