Entropic Monitor
Analysis of these devices has led to great confusion amongst CONCORD scientists. It appears that the sensors that line its surface are designed to measure nothing. More precisely, the location and arrangements of negative space and null-energy zones within the surrounding system. What the purpose of this information might be is currently unknown.

Fermion Monitor
Intercepted data transfers indicate that this device is gathering information on the quantum state of particles throughout the surrounding system. CONCORD researchers believe this may be an error however, as the computational power required to process such vast quantities of data is theoretically impossible.

Graviton Monitor
Scans indicate this device is unusually simple for Trigalvian technology. It appears to be gathering gravitonic information from the surrounding system using methods very similar to those common throughout New Eden. Where it differs is that all the data gathered is being contextualized relative to apparently random coordinates in Abyssal space. Early analysis has not been able to provide any rational link between these two data sets.

If you have any more data to add, please share it below.

If any triglavian-aligned member is reading this, could you try to run a cycle of entosis link; data&relic analyser; salvager; ship scanner; cargo scanner; on each ? I would gladly do so myself, but being neutral make it that the TC are aggressive to me.

((sorry for the duplicate, I miss clicked the category ^^" ))

During the early stages of the Triglavian Invasion, we would see these at the World Ark Proving Conduits. They seem to be deployed by the World Ark, however, we never witnessed this happening, unlike the status Pylons and other larger structures.

I have speculated that they use these devices to determine the nature of the local spacetime in order to plan the next stage, as not all systems have suitable conditions.

As I remember it entosis didn’t fire, and destruction or lack of destruction of the devices had no noticeable effect on the Triglavian’s behaviors. I assume if they are not destroyed ahead of time, the conflagration that comes with the smart bomb Pylon would quickly destroy them.

Confirming the presence of these alongside Skarkon’s World Ark, posting visual data captured. As I’m in an unarmed covert research vessel, no action was taken other than observation. Triglavian forces were active near the World Ark and the devices, so a hacking attempt could not be made at this time. 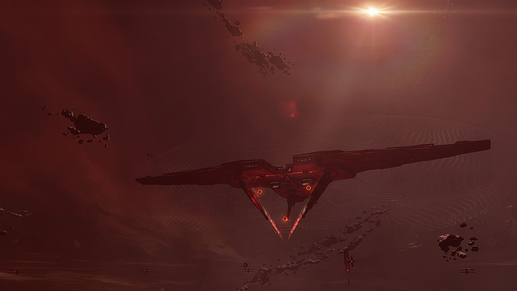 Not new, I would have to check my records but I first examined these well over a year ago.

I must have missed then, thanks for the correction.
If you have any data regarding them, sharing would be appreciated.

Pretty much as other have said. The Triglavians were assessing local space conditions. Their systems scans allowed them to get an overall reading of a systems potential, these gave them much more detailed information.