I’m yet to see one wormhole leading into Triglavian space

Do you live in minmatar or amarr space by any chance?

Expand the section under “C729 Wormhole Candidates” for a full list of potential spawn systems, if you’re looking for entry to a specific system you can look at the maps on that page and we try to keep the tracker up to date with active known connections, i’m sure Jita will be happy to hear you haven’t been harassed by 100 WH spawns in the last 2 months 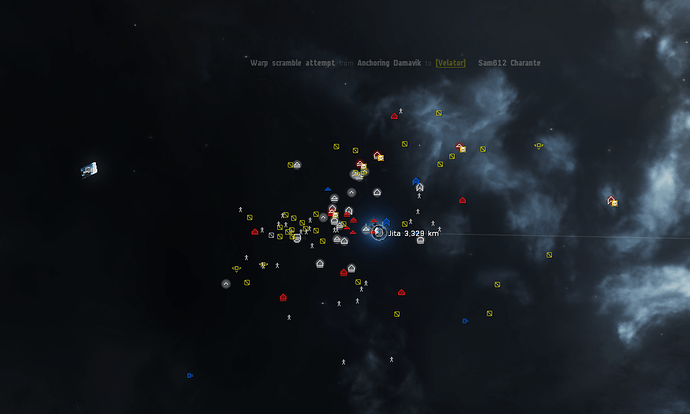 Half is corvettes. Many new players.
Perimeter can have two triglavian wormholes, that means double the size of trig gatecamps possible.

Seems fun, that’s a lot to loot and salvage!

I often see sites like these in null (after a fight) and have a salvage fit Imicus ready for such occasions. It’s nice high sec salvagers and looters can now find battlefields like these too!

that’s a lot to loot and salvage!

You better stay in null, so you will not be disappointed. Its worth pennies.

You mean there’s nothing valuable in those wrecks? Or has everyone else already looted the valuables? Because if it’s the latter, it’s pretty much the same as in null.

Tech 1 ships like few small haulers with tech 1 mods and corvettes with civilian modules. Freighter pilots or missioners who have something valuable have adjusted to it.

Who is mostly shot at are few returning players (rarely) or completely new guys (by default).

During the hour I could join the fun yesterday, I saw two Orcas and at least one rattlesnake die, so it’s worth camping. Unfortunately I was not able to catch the Rattle hauler due to my stupidity. The noob ships you see die are the looters.

Hence get your intel right, a few die to rats, most died to us rest camping and shooting suspects.

Of course not everyone was killed by trigs. But in those trig kills reported on zkill there is a tendency like I wrote.

Learning opportunity. EvE: here is a problem, find a solution. This is how all games work, isn’t it?

I think in such a generalization the value of verity is negligible.

No, it isn’t, because who “dies” first in any game? The clueless and starters. Why is EvE treated differently? Only because loss of stuff is permanent. But this is also the reason why EvE is still here after 18 years.

That made me laugh so hard people in hel were distracted for a moment.

Yes there is!
There’s a ton of people’s wearing a path between one ship in their hanger and another. They do this all day long, it’s amazing.

Yes, that’s true … so you agree with me? Games can give you a sense of accomplishment in activities some would not do in RL because they would mean risking your life, health or simply not possible due to resources, physics.

EvE especially is targeted at those risky, competitive activities, while still also having other aspects like building big stuff, organizing things. Which makes it very unique IMO.

Game was doing ok 17 years without them.
If CCP wants only players who can get past it, then they are upping the requirements for players, it means less players. Harder challenge cant be completed by the same amount of people as easier challenge. Also larger amount of people who will not complete it will not get satisfaction from it. They will want to avoid it. That removal of annoying obstacle by escape from them by standings doesnt give sense of achievement, its escape from problem. If they would solo trigs on gates, then they would gat satisfaction from defeating them. For that they would need a lot of skills and knowledge, and majority will not be angaging in that part of gameplay, meaning another thing CCP made taht players dont engage with.

Im actually mostly in wormhole space, but I also spend time in amarr space… but I dont look for wormholes when Im there

If they would solo trigs on gates, then they would gat satisfaction from defeating them.

Having an oppo to take on a smaller bunch of trigs (or single tough one) at a gate or elsewhere in a T1 dessy/cruiser with a reasonable chance of success would be nice, indeed. Even if it would require, like, scanning them down with combat probes or something first.