Hi
We have made some window changes for the next release. It should reduce (or hopefully eliminate) the need to click in the window more than once to receive input.

It’s should be live on Singularity now, so if you’d like to give it a shot and give us any feedback, just select Singularity in the bottom right of your launcher.

Wow, I just tested on Singularity and it’s a massive quality of life improvement. Such a simple thing, but having the UI respond reliably on first click makes the game so much more responsive.

Thank you for pursuing this @CCP_Caffeine. I hope this change makes its way to production quickly.

Just did a quick test, and it’s a really great improvement. Thanks for implementing this! Hope it will be available on Tranquility soon!

Thank you both for the feedback

Glad it’s working the way we intended.
We’ll try to get it out in this monthly release.

@Caffeine_Coma - We’ve not been able to replicate the mouse issue you’re having. Do you have an EBR number (Eve Bug Report)? If not, please create one and include as many details as possible (your mouse, OS, hardware etc…) and we’ll see if we can reproduce it

Hi CCP Caffeine.
I created a bug report EBR-226061. Let me know please if you need additional information from me.

Thank you.
A fix should be live on Singularity now, so if you’d like to give it a shot and give us any feedback, just select Singularity in the bottom right of your launcher and let us know

It should make its way into the next monthly release.

I can confirm the mouse issue (when using my laptop’s trackpad) is still present on Singularity. I’m on a 2020 MacBook Pro running macOS Monterey, Version 12.0.1. Using either a three finger drag or a click-and-drag to move around the camera at a moderate speed causes the cursor to totally spaz out for me—it looks like it rapidly tries to jump between two different spots. The Camera Inertia setting seems to increase the intensity at which it jumps around, with more stiff being more “jumpy”, but it’s still unusable at either extreme. Camera sensitivity seems to have no effect. This is on “Version: 19.10.1962138” in the top-left text of the pause menu.

After Downtime today, I’m getting connection errors on the launcher. Any ideas. Prior to downtime today, it was connecting to the server fine. 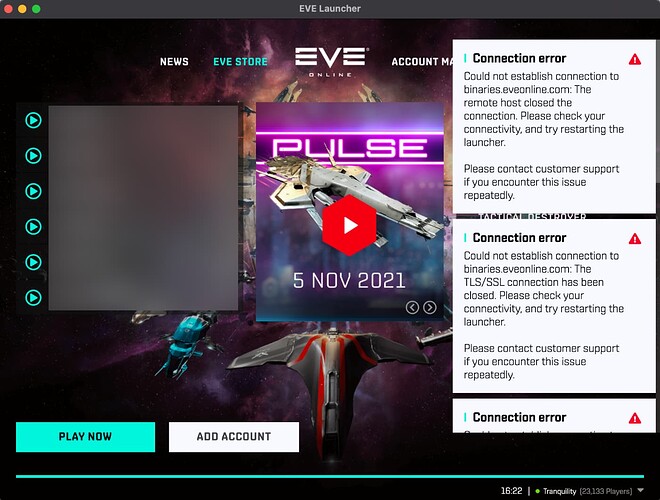 Game still crashes on my MacBook. Was able to test EVE on my Dad’s 2019 iMac with LOTS of power and the same Problems occur, especially the always present mouse lag.

My god CCP its been several month and im paying for this. At least give me the chance to play eve with WINE again because that’s where the game actually worked on Mac.

Could you provide me with your ticket numbers / EVE Bug Report information?

We are aware that some users are experiencing a ‘mouse lag’ issue, where the cursor appears to jump around the screen. We have been unable to replicate this internally, but we have seen videos of the issue from players. I assure you we are investigating it, but without a reproduction, we can’t find out the root cause and fix

I’m also interested in the stability issues you’re experiencing. An EBR with system information and any steps you have taken for the crash to happen would be very useful for us to investigate.

I see the same problems and made several Bug-Reports.

The mouse-cursor is sometimes “flickering” like crazy as described above. I don´t know why, but it went better in the last weeks.

But now I see more and more client freezes, mostly inside Jita-Station and in missions with a lot npcs / laser-fire. I already play with the most graphics set on low and the most effects unticked.

to get out of Jita I have to set absolut everything on low, to not get the rainbow-wheel of death.

my mac-book is using:

Its really frustrating. I am more afraid of game-crashes than gankers or gate-camps.

Any news about issuies with mouse? Really annoying