Please use this thread for reporting and tracking of any issues found in the 20.11 version of EVE Online, first released December 13th 2022.

Please use this thread for reporting and tracking of any issues.

Also: I am not even in the game yet and already see any issue with Photon: 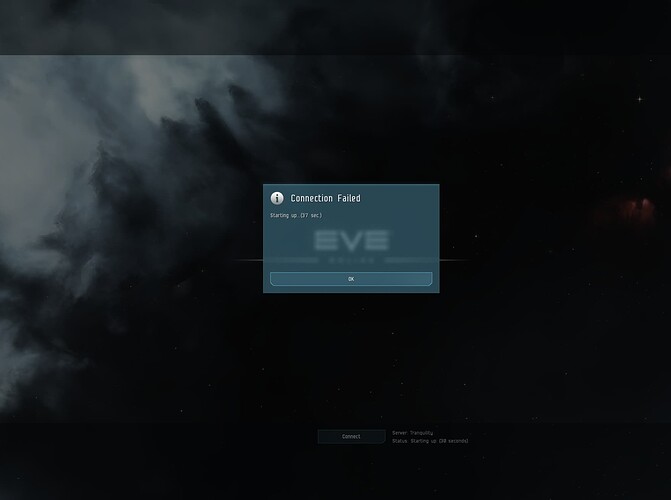 Look at this huge notification window that is the smallest possible size. See all this ridiculous amount of wasted, empty space? Why? What is the point of this ridiculous waste of space… And on top of that: Text in this window is harder to read. Great. I’m already looking forward to testing Photon again and turning it off again.

Good things about it?

Overall: Photon is coming along but it is still a trainwreck. And even though CCP says they want to introduce more uniformity in the UI, especially when it comes to buttons CCP introduces a ridiculous amount of inconsistency and irregularities compared to the old UI. Who thinks this is a good idea?

Photon really and absolutely needs a general setting “Compact UI” or “Normal UI” in General Settings because I really, really do not want to go through all the windows on all my characters and compact what can be compacted. This should be much easier.

There are no Observatory Flashpoints in Pochven since the patch.

AIR Activities now add an unremovable New Thing indicator to the EVE menu because I have X unclaimed rewards. Despite me having turned off Blinking for that window and I don’t care about the rewards. Great.

The same problem applies to the Redeem Items window. It has the colored New Things marker on it and I cannot remove it unless I clear out all the things. In the old UI, I could open it and close it and the blinking was gone. Bad UI design.

Typo or cut off in compact in Photon. We now “earch” for items.

The observatory flashpoints are not spawning in pochven, is it intended nerf, or a bug 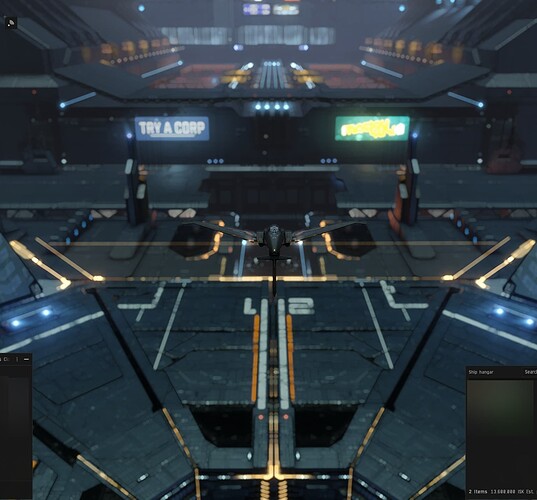 This is with DOV turned on. I get that the things in the far back of the hangar are out of focus. But why is the hangar platform out of focus as well? This entire feature is nauseating.

This isn’t really a “bug” per se, but was playing with the Career Agent Industrialist changes this morning. In re this:

New characters do not have the required skills to use this item. It might be a good idea, if this is intentional behavior, to more carefully explain how to get a skill and inject it and so on, and train it, so that you can use this level one item.

when a chat window is reduced in size to its minimum, it keeps refreshing the format and consumes lots of FPS 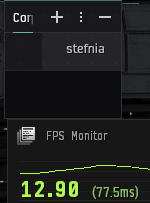 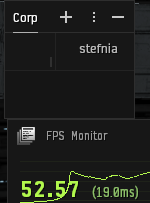 Took me a while to find it out …

Nonphoton:
Correct me if i’m wrong, but i have a feeling that scrollbars into inventory and chat channels were changing its brightness on mouseover prior the patch. Moreover scrollbars in some parts of inventory and other windows like agency, character sheet etc. are changing its brightness on mouseover.
Here’s the picture of what i’m talking about: 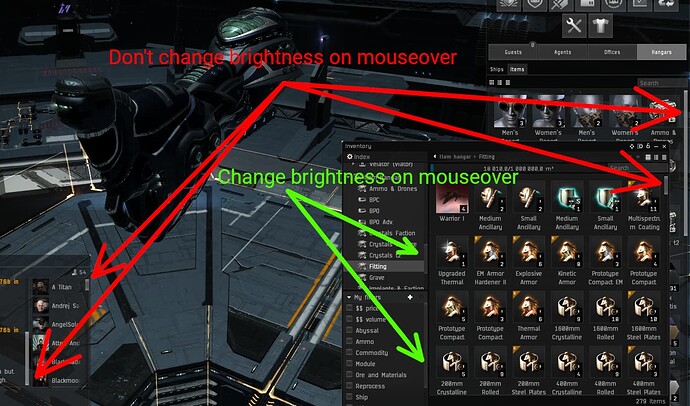 It seems to be not bad, but huge invisible frames in the windows force you to disable the new interface

the base yield when reprocessing the new ores like moonshine ytirium in a tatara is incorrect: its only 50% instead of 63% like everything else. Jet ochre looks fine, but not others.

My screen is currently alternating between this: 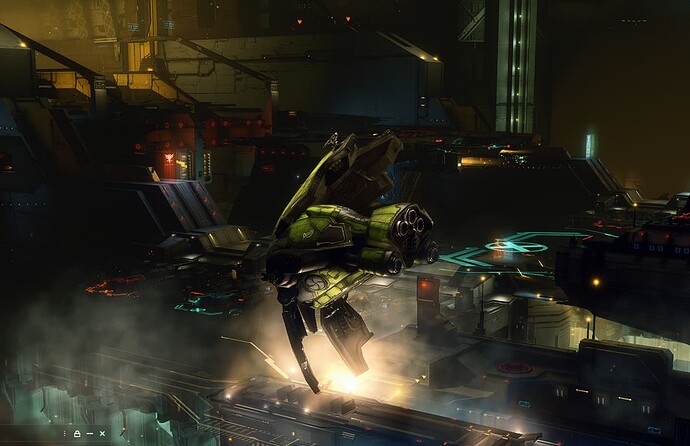 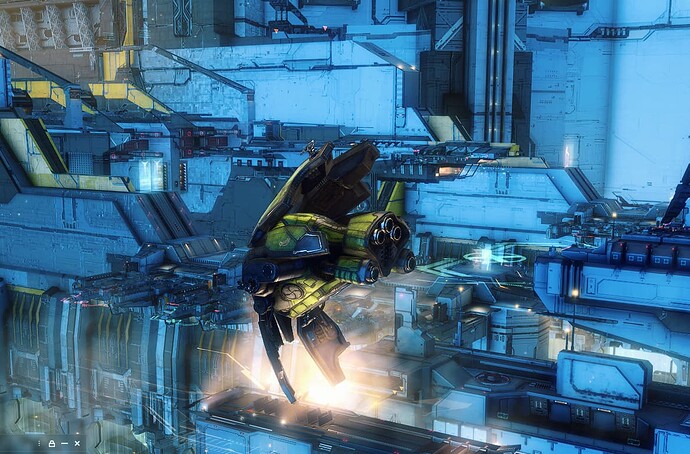 every second or so

I’m not sure where the blue light is coming from

Maybe the texture gets inverted or something?

Just a random guess though, maybe it is some light issue as you mention.

Adding my post from the Photon UI feedback thread here since its live:

Example: I opened the default War Targets filter, it shows the Exceptions state from a different profile. 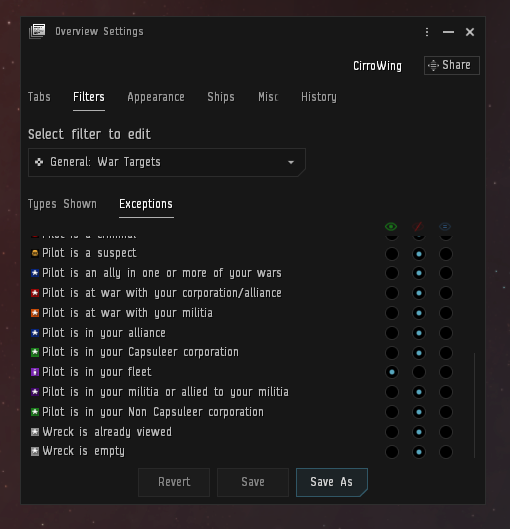 After adding a new overview tab with Filter-B loaded as separate window:
(1) Closing the Overview Settings, selecting/highlighting a different tab, and re-opening the menu seems to load the correct Filter-A state for that tab initially.
(2) The Select filter to edit drop down menu does not work for exceptions, the same filter’s exceptions remain loaded.
(3) Attempting to edit any exception state will update filter-A, followed by the menu instead showing exception states from a different Filter-B (one recently added as separate window). Further changes to this unexpected Filter-B work ‘correctly’ (the menu still incorrectly displays as editing Filter-A). It is not possible to get the overview menu to show or edit a different filter unless step 1 is repeated.

- JUST TRIED THE TYPES TAB, all the above applies to type filters as well - Once you edit any of the types any further changes are always made to the filter in the separate window instead of the one you might expect. (and breaks the select all buttons / right click menus until you re-open)

Highly recommend communicating to players not to touch their overview types or exceptions if they are using separate overview windows, or to make an overview export before doing so. The menu will no longer accurately show the current or expected results, and you are very likely to mess up your overviews.

High GPU usage in Hangar at the lowest settings. It seems to scale directly with the zoom in / out. Also high GPU when using multiple EVE instances that are not minimized. Each instance gets their share of GPU.
In space the problem is not visible.